Reader, I married him 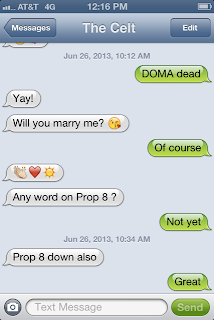 After thirty-four, nearly thirty-five years, it has happened – I begin to feel equal to my fellow citizens. Spending the weekend, Pride weekend, in New York and will be back on Tuesday to continue the posts about timelessness.


Great Pride in being an American today.
Posted by Blue at 9:43 PM 25 comments:

Last year I wrote about the difference between critique and criticism and since then I have hesitated to critique fearing it would be misconstrued as criticism – though, given my level of irritation when I read the OMG blogs, I wonder now why I've been diffident. Below is a comment on the previous post that coincided with thoughts I've had about a change of direction – more of a swerve, really – in the blog. It is a very interesting comment because the writer is quite clear in what he, or she, wants. I wrote a brief reply in the comments section of the last post and now would like to expand on that.

"Where do I begin? Another entertaining and informative piece, Blue. I adore the country home of Tony Childs and its timeless beauty. I have a request and a question. The request would be a post by you on what you believe makes a design timeless and give us as many examples as possible using a variety of design elements. As to the question, do you believe the so called "design blogs" are making design better or worse? I read many of them and come away with the impression that readers of these blogs often want to emulate the design aesthetic of the authors. There seems to be a herd mentality brewing in blogland and it's not good. What do you think?" 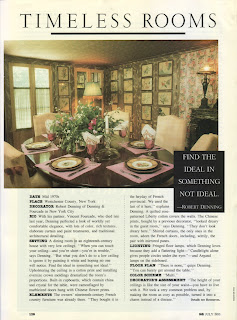 Regarding your request … the question of what makes a design timeless is something I think about a lot. I have provided examples of what I consider to be timeless rooms, but as to whether it is possible to extrapolate from these some rules, principles or guidelines – to codify, crystalize or pin down what exactly is timeless design - I'm not so sure. But it's an interesting challenge and one I shall make attempts to formulate in a future posts. If timelessness is explained as referring or restricted to no particular time then I wonder if it might be worth looking at both positive and negative aspects of an abiding aesthetic. A debate about the quality of design, or lack thereof, after the Industrial Revolution arose, in fact, after the Great Exhibition of 1851 – a debate that, for some of us, is not yet ended. I hope to continue it in future posts.

Regarding your question as to whether the plethora of design blogs is making things better or worse, that's both a tough one and a very interesting one. Personally, I cannot abide the how to style your bar cart, or the how to style your bookshelves like an interior designer blogs, or the uncritical let us now praise famous men blogs. On the other hand, it could be argued, any increase in awareness and discussion of design must be a good thing. If the result is a dumbing down of the discourse of design, then is the net result a positive or a negative? The answer to that question is very interesting and, having seen the results in the classroom, slightly scary.

And yet, and yet, maybe it's my age, but I can't help feeling that a Pinterest page full of images copied from other sources – however beautiful – is less valuable to the world than a new design idea, or a new analysis, however much I might disagree with the point being made. Only new ideas serve to move the debate forward. Repetition of existing ideas – the herd mentality of which you speak – keeps us all like moths circling the same lightbulb.

I give an example above of an article from HG, July 1993, of what the decorator Robert Denning considered a timeless room.  Created in the mid-1970s by Denning and Vincent Fourcade, the reader, twenty years later, was asked to suspend all disbelief and consider this dining room with its uneasy mixture of pattern, color, caterer-style napery, floral centerpiece, cafe curtains, and blind-man's marbleizing to be "the finding of the ideal in something not ideal."

Chickendale, light-filled, gentlemanly rooms, and being combed out 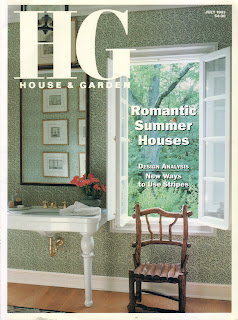 "I've told you about Miss Louise, haven't I?" asked my old prof over lunch. "Not yet," I replied, "but I'd love to hear about her."

"There isn't much to say other than she was a Southern lady of stately aspect – a decorator ... a marvelous decorator, who knew her furniture ...  no Chickendale for her, it was all good stuff ... at Rich's when Rich's was something in Atlanta. Did I ever explain what the five pieces of Southern furniture are?"

"Yes," I said, "but I've forgotten. Tell me again." "We're off!" thought I and settled into my Manhattan – it wasn't really a bourbon on the rocks kind of day: a bit grey, a bit dull, a bit overcast – and that was me, not the weather.

"We're here for the afternoon, if we like – remember, they know us."

"Well. the five pieces of Southern furniture are the slab or the huntboard; the cellarette ... oh, those Baptists loved their cellarettes ... hid a multitude of sins, of course ... the sugar chest; the lazy susan and the biscuit board. I should perhaps say that they are the five pieces of furniture that were once considered Southern, and Miss Louise certainly knew what they were. She sold enough of them, and the real thing, too."

"Ah, yes, Miss Louise. What's so memorable about her?"

"She was a good decorator, a real lady who could laugh at herself. Stopped for speeding ... windows wide open, it was summer ... she told the tale that when the policeman came to her car, she patted her bosom as only a Southern lady could, crying 'a bee, officer, a bee. Can you help me?' He left very quickly – no ticket – and she sped on. But, it wasn't the way she lived, necessarily, that made her famous... more the way she went."

"Died. She died under the hairdryer at Rich's salon and ... well the phrase is – and if it's not on her gravestone, it should be – permed at Rich's and combed out at Patterson's [funeral home]." 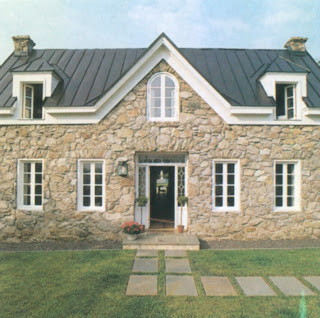 I admired it then, and I love it still, the Virginia countryside home of Antony Childs. Two years ago I wrote about Childs' Georgetown house:

"There are what used to be called 'important antiques' dotted around, but in this room and the rest of the house a good balance between display and hospitality has been achieved. It's unlikely anyone entering the front door got the feeling they first should have checked their personal liability insurance.

"The most pleasing thing about these charming rooms is that they were created over twenty years ago yet are as fresh and classic as they were then. Nothing has dated – well, maybe the skirted dining table a little, though I must say I've always been partial to a good skirted table. The grand dining room curtains are pretty restrained in comparison to many a drapery from the same time, and would not look out of place today. Other windows in the house, judging by photos of the living room and bedroom, are simply furnished with Roman shades, that most classic of window covering. The wooden furniture is grand but not repellant in its pomposity and the upholstery is sane and welcome. I could go on about the contents of these rooms but they are visible in the photos. Unusual for the time there is no name-dropping provenance for any of the furniture.

"I didn't know this man, but I like his light-filled, gentlemanly rooms. These are spaces to be alone it, kiss a lover or two, listen to Roy Orbison, read (the phrase curl up with a good book comes to mind, but I shall eschew it), trip a light fantastic, play with a Game Boy, wax poetical, opine on how the world's gone mad today, good's bad today, black's white today, and day's night today when most guys today ... " 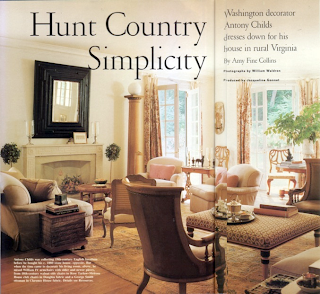 Though I wrote then about other rooms with other furniture, the qualities I admired in Georgetown I found and still find in the Virginia hunt country house: light-filled; gentlemanly; restrained; pleasing; fresh; classic and simple.

There isn't anything that does not continue to delight my eye – from Sanderson's Willow Minor bathroom wallpaper, a 17th-century Dutch ebony frame above Dana Westring's trompe l'oeil finely-painted chimney board, William IV leather-covered armchairs, Régence chair, 18th-century four-poster bed and French desk at its foot – there are none of the five pieces of Southern furniture. Perhaps, more important than any individual piece of furniture or decoration, is the sense of airy, sunlit space. As far as I can see there are only two concessions to "spirit of place" as it was often expressed in the 80s and 90s, the homages to imagined histories – the horn trophies on the dining room walls and the twig chair beneath the bathroom window. For the rest, it is an evocation of the real spirit of place – peace, quiet, comfort and hospitality of a weekend in the country. 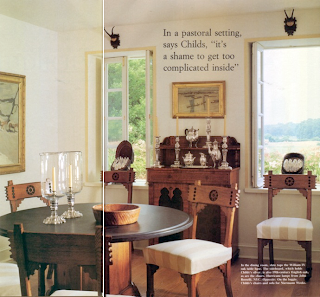 Antony Childs, who died of AIDS in June 1994 at the age of 57, one year after the article was published – the last one about him – called the house, in comparison to what he did for his clients, "undressed." 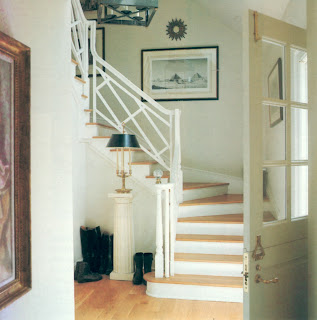 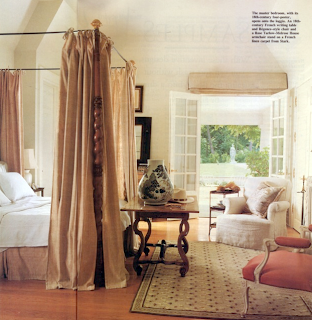 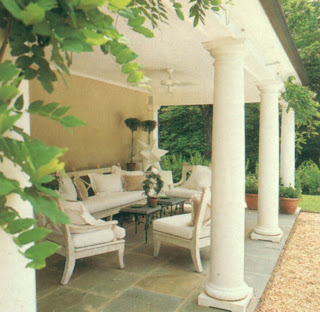 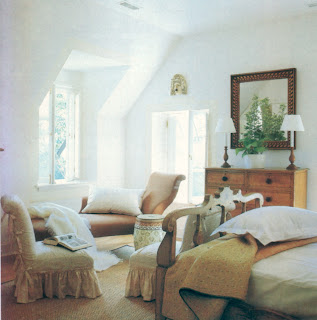 The Five Pieces of Southern Furniture


A Huntboard or slab as it is also known is, according to Merriam-Webster.com, similar to a sideboard but frequently simpler, smaller and taller. Allegedly used at hunt breakfasts. 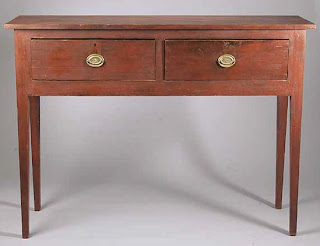 A Cellarette is a small, portable wine storage chest, frequently made of mahogany, but without a water-proof lining that could hold ice. From Pinterest. 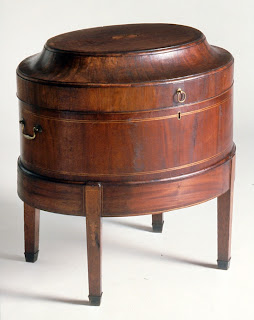 A Sugar Chest is a piece of furniture in the late 18th-century and the early 19th-century. Used to store large quantities of sugar for longer periods of time. From Pinterest. 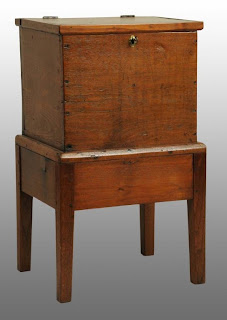 A Lazy Susan is a revolving platform set into the top of a "self-waiting" table. From here. 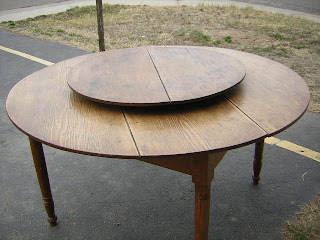 A Biscuit Board is tautologous to say it's a board on which biscuits are prepared. From here, the most explanatory example I could find on the web. 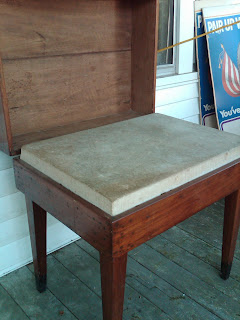 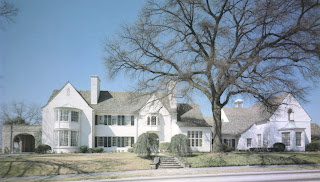 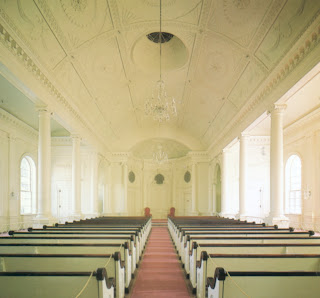 When we first came to Atlanta twenty years ago the Spring Hill Mortuary, as it is also known, was covered in ivy and looked like a house on a hill. Since, as you see, it has been stripped of greenery and repainted white.


Photographs of Patterson's and its chapel by Timothy Hursley from American Classicist: The Architecture of Philip Trammell Shutze, Elizabeth Meredith Dowling, Rizzoli, 1989.

Photographs of Antony Childs' house by William Waldren from and article by Amy Fine Collins in HG House and Garden, July 1993.
Posted by Blue at 8:26 PM 26 comments: