Recently, I was asked to recommend interior design books for a beginner's library. I rattled off a list of the names we all have on the tips of our tongues – Elsie de Wolfe, Syrie Maugham, Frances Elkins, Nancy Lancaster, Sister Parish, Jean-Michel Frank, Billy Baldwin, John Fowler, David Hicks, Albert Hadley and Mark Hampton. Eventually I wandered off, texting the bartender for another manhattan as I did so, and it occurred to me as I headed to the bar that, though a good list of names, I'd missed the point. Someone else that evening in our library during one of our cocktail parties had remarked how lucky I was to own all these books. Two manhattans in, the point I'd missed, whatever it was, eluded me momentarily – until my mind snagged on that word "lucky". 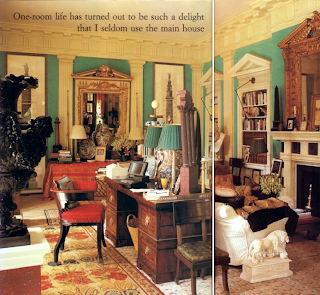 Indeed, but to what end? thought I, surprising myself with the force of it. I own each of the books on my quick list (and many more such monographs) and, irritated as I am to find it so, it took someone else's perfectly normal question to set me wondering why I actually do own and want to own so many books. To what end, precisely? Or, to be precise, what happens to them if, in the end, I no longer need them? How does one dismantle a lifetime's collection of books? Is it just so much paper that few, if anyone, would want?

I've mentioned before how the new president of a local for-profit university decided the modern student no longer needed books as "everything necessary is available online." He closed the library, deaccessioned everything, and at the time it seemed self-evident that it was to my benefit to have, at least, the books I'd ordered for the school library come into mine. After all, I was still teaching, would do so for the foreseeable future and I could use them for the blog. When, a few years later, I retire, that seemed yet another opportunity – I could spend golden years reading them all – visions of velvet smoking jacket-clad days spent in a paneled library, books piling (neatly) all over the place, creaking shelves reaching to the ceiling, the scents of leather and pot-pouri, the literary equivalent of new car smell, suffusing the room, all played in my head.

And, alas, it was almost to be, this bastion against the increasing tide of philistinism. 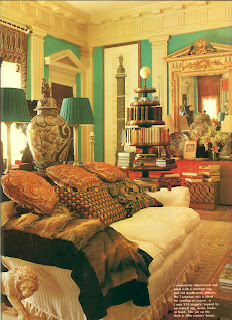 Despite illusion and delusion I continue to buy interior design books – though in fewer number than previously. Conversely, I delve into my shelves and stacks far more than ever I did for, perhaps not so surprisingly, they prove to be more satisfactory than what is available in stores.

If there is anything missing from my collection of books it is a coherent history of 20th-century and 21st-century decorating and design. A history of residential decoration could be cobbled together from the books I own, but if anyone were interested in design rather than decoration he would have slim pickings. Interior decoration, still a massive if shrunken industry, is but a tiny part of the national market – contract or commercial design taking the largest segment. 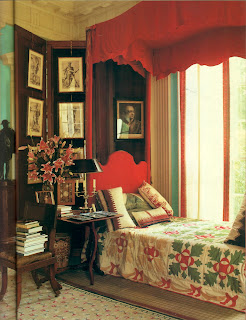 Thus, if I were asked again to suggest a beginner's library for an aspiring student of interior design I would recommend first reading Becoming an Interior Designer: A Guide to Careers in Design by Christine Piotrowski – an expensive and rather dry introduction to the business of design and the difference between decoration and design. Beyond that, I'd suggest books about architecture and historical styles – the golden oldie by Sir Bannister Fletcher, A History of Architecture on the Comparative Method. For furniture styles and the history thereof, I suggest John Moreley's The History of Furniture: Twenty-Five Centuries of Style and Design in the Western Tradition, and because its just fascinating, Geoffrey Beard's Upholsterers & Interior Furnishings in England, 1530 -1840. 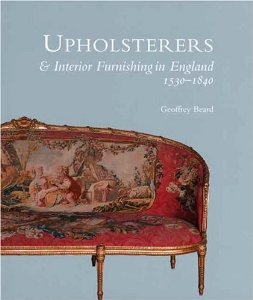 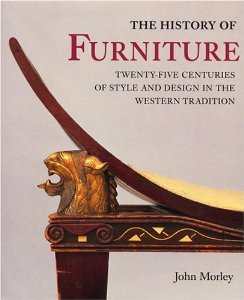 For my neighbour who asked me for recommendations I would amend my original list to include both Morley's and Beard's books with the further addition of The Inspiration of the Past and The Search for a Style by John Cornforth to provide historical context for all the practitioners, both of yesterday and today, of traditional design.

Regarding residential design the following photograph will show you where my tastes lie and I can heartily recommend each of the books shown. 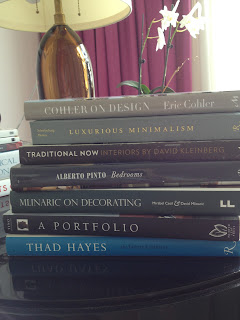 The photographs by Richard Felber of John Richardson's library/writing room are from the last issue of HG published in July 1993. I still miss House and Garden – besides The World of Interiors, still the best interiors magazine there was. It was replaced by Domino, of all things. 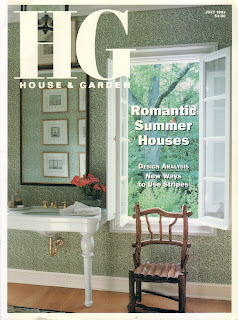 I kept that last issue for years but where it now is I've no idea. My friend Will Merril mailed me his copy for the article about John Richardson's library and to my joy I found also the last published article about one my circles-within-circles decorators, Antony Childs. More about him next time.
Posted by Blue at 1:55 PM 23 comments:

"Blue, prepare to have your socks knocked off at Kips Bay ..." wrote a commenter last week about my misgivings after visiting the Atlanta Symphony Show House, and I must admit I went to the Kips Bay 41st Annual Decorator Show House with a certain anticipation which was, to a degree, repaid. 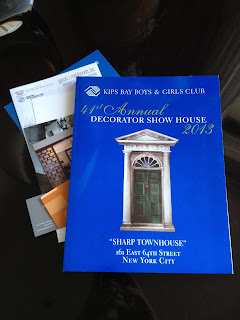 There always is, or should be, excitement about seeing who is doing what in show houses, and from that point of view Kips Bay did not disappoint, though my socks were not, as threatened blown off. The kitchen was superb, but show house kitchens always are, and the dining room a marvel of art, decoration, atmosphere, and practicality. In place of an actual sideboard a deconstructing bronze sculpture based on the form of a sideboard, that made me wish it was a sideboard – a superb piece that I wish I could have photographed. Above the table hung a tree branch and writhing neon pendant that was the best of its kind. I'm not really sure how the room would work for a few old fogies who need more than atmosphere to light their ways to the cognac, but I'll forgive that.

High-gloss, saturated color was much in evidence, as was the ongoing love-affair with 50's and 60's Italian furniture, and the strained-thru-SoCal 70's flea-market upgrades, though there was, that I saw, thankfully nary a rumor of Eames. Yet the neutral room persists: white on cream, white on beige, white on white, white on wood, white on tedium. Really? Still?

Photography was not permitted so in writing this I am working on what I remember four days afterwards. Robert Brown's room, the first (I am told) at Kips Bay by an Atlanta decorator and literally the first room which one saw – or rather could have seen had it not been used for ticket sales and queueing – sadly as a result doesn't stand out, as it should, in my memory. Brown is a excellent decorator who, in my opinion, was underserved by the show house for, clearly, if a decorator earns a place that place should be respected and not be screened from view by a queue of ticket buyers.

Two adjoining rooms upstairs, the connecting doors carefully kept closed, were, for me, the yin and yang of the show house – one, a bedroom, an anachronism, a throw-back even, (remember, personal opinions here) by the West coast decorator presently masquerading as Ingres' Grande Odalisque in a Bath Towel in advertisements for Scalamandré, and the other an appreciation of the cool, friends–with–benefits sophistication of modern life. This is not to say I disliked either room – quite the contrary, in fact – but their juxtaposition set me thinking about the modern producers of mass-taste, those connections between decorating, TV and licensing.

At the top of the house, opening on to a beautiful roof terrace and with carp-filled pool, a luminously spacious family room with its lavender and grey coloration, silver blown-glass logs in a steel and mirror firebox below a big-assed TV, was the favorite despite that most repellant of furnishing textiles, a hair-on-hide rug.

Licensing is a topic of significance that I shall wait to tackle more fully in another post – when I'm not sitting here, thoroughly bad-tempered, impatient, woozy, and hacking and wheezing from the worst airplane cold I've ever had. I will say, however, that a few years back I saw, and I wish I'd kept it, on the back of a very old Architectural Digest, a pattern that was at the time being marketed as a design, recolored for modern times, by a well-known interior decorator. Call me naive if you wish, but I was shocked at it. I remain shocked when I think of how fabric houses and furniture manufacturers are pushing out collections of quite ordinary and derivative collections distinguished only by the celebrity name on the label. How we got here is worth considering – some other time.

No, I didn't come away de-socked from Kips Bay, was never breathless from excitement – from the stairs, yes, certainly – and to be candid was underwhelmed by a couple of big names. Subtlety to the point of tedium or invisibility is not for me. I thought, though, as also a friend texted me to say, that these are not the grand old days of Buatta, Hampton and Parish-Hadley. Perhaps that is not a bad thing. Times change. 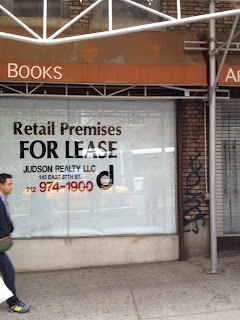 But not always for the good. Though it happened months ago, it was only this weekend that I learned, heartbreakingly, that Archivia Books has closed. It occurred to me as I stood there, amazed that this beautiful shop has gone, that I am part of the problem. How proud I have been of saving money by going to Amazon to buy books when clearly if I have the money to buy such books I could afford to pay full price. Why would I? Look at the desolation above and wonder if keeping a local business going is worth it.


For photographs of some of the rooms go here.
Posted by Blue at 8:47 PM 14 comments: