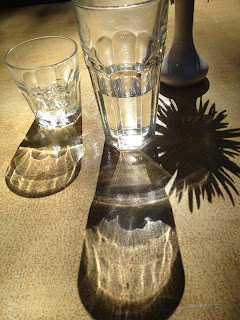 Strafed by flies circling the only sunny spot on the restaurant terrace, ruminating on both bread and life, and glamoured by the play of light on the tabletop, I listened as I sipped my bourbon to the Celt and my old professor discuss the worth of voting in Georgia. And as I sipped, it occurred to me that theirs was but a continuation of a conversation I been overhearing across our acquaintance for weeks now.

A few weeks ago I sat at dinner with people who, mostly, could have been my children's age and, as if personally involved, were talking about celebrity derring-do. Now, I recognize this kind of conversation is nothing more than oiling the wheels of social interaction, but there are times – many, actually – when I cannot take part because I have little if any idea of whom this or that person is. Despite the merriment – and it was a merry evening – my mind wandered as I looked around me at the Chippendale chairs and the chandelier, prismatic and tinkling above our heads... thinking, as one does, how much I might resemble a tipsy eighteenth-century squire surrounded by kith and kin in his newly-bought dining room. I thought too of a style of furniture that in its heyday (a day not yet gone by in Atlanta) had, with regional inflections, spanned the Continent, Great Britain and its burgeoning empire. As I sat there, an occasion from nearly twenty years ago and, to me, very eighteenth-century in feel, came to mind: we'd been taken to lunch by a business acquaintance at his wife's grandparents house, and the grandfather during the meal went to his Chippendale sideboard, quietly took out a chamber pot, pissed into it, put it back in its place, and reseated himself at the head of the table. Bewildering, bothering or bewitching, I couldn't decide – but sure as hell I have remembered it.

I was brought back to table from my eighteenth-century reverie of squiredom, fox-hunting and common land enclosures, by a tale of a local decorator – a friend of the speaker – who'd shocked him and his partner by announcing that they should "vote with their wallets" rather than on social issues. My question, after listening for a little while longer, and perhaps a little too forcefully interjected, was why he and his partner would consider that person a friend if she was supporting a candidate who clearly would deny them the civil rights they considered to be theirs.

In the wee hours of Sunday morning, home again from the two parties we'd attended, we drank a nightcap with two men bewildered by the number of their friends who would, as they saw it, vote their rights away for the sake of a tax break and were trying to persuade them to follow suit. During that conversation I remembered a pamphlet* published some thirty years ago that queried why we seek for the good wishes of those whom we allow to oppress us. As I recollect it, it was a piece of polemic, uncompromising in nature, and it has influenced me ever since – despite the accommodations and compromises that sometimes, over the years, whether unthinkingly or not, I have made and continue to make.

One way or another, it will be a different world on Wednesday morning. But either way, there will still be much to be fought for.