Something for the weekend

The dictionary defines timeless as "unaffected by the passage of time or changes in fashion." I am not so absolute in my understanding of timelessness – the fact that an interior looks as up-to-date today as it did when it was first photographed twenty, thirty or forty years ago is sufficient for me. It has, in other words, to stand outside what makes a room up-to-date and fashionable. Yet, there has to be be more than the statement of timelessness: some scrutiny of the qualities that keep a room from dating has to be made, however personal the analysis. 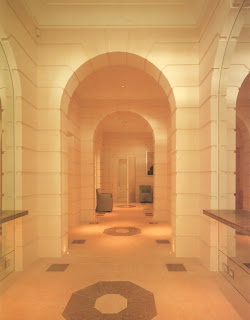 Harmony is to me an important factor in timelessness as important as absence, as well as a basic principle of design. This is well explained by the following quotation. It's long, but worth reading fully for – despite being written about art in the 1920s – it has, if you'll pardon the expression, stood the test of time. Just as importantly, it contains a basic lesson in design the consequences of which, are sadly rarely visible in much of what is published about interior design today. 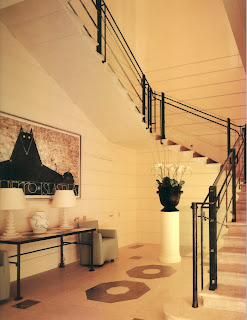 "Harmony is the art principle which produces an impression of unity through the selection and arrangement of consistent objects and ideas. When all the objects in a group seem to have a strong 'family resemblance,' that group illustrates the principle of harmonious selection; and when these 'friendly' articles are so arranged that the leading lines follow the shape of the object on which they are placed, harmony has been secured in both selection and arrangement. How much likeness should be sought and how much variety or contrast is appropriate are the questions to be decided in any situation. One enjoys a certain amount of variation for the sake of interest, but for the sake of harmony this variation must always stop just short of absolute contradiction in any important matter. Similarly, there should be something in common among all the large things which are to be put together, but the smaller objects used for accent and variety may contrast. The smaller the amount of contrasting note, the stronger the difference between the contrasting objects may be. 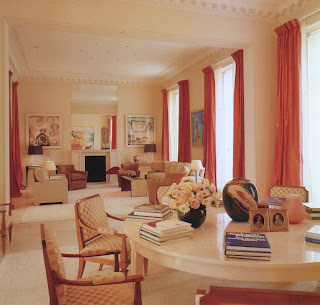 A cardinal quality in rooms that I find timeless is absence, by which I mean an avoidance of the non-essential, and a trust that space, in itself, is not negative. It does not mean that I prefer rooms that are unfurnished or undecorated – though there are empty rooms rooms large and small that can live without further additions. The only improvement that can be made to them is to leave them alone. 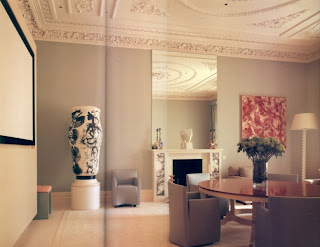 I had planned to present one room at a time in what is an ongoing, and occasional, thesis about timelessness, but here in this interior by that most discrete and educated of decorators, David Mlinaric, the consistent use of absence is irresistible – so much so, I felt I must show more than one room to give at least an impression of the harmonious whole. 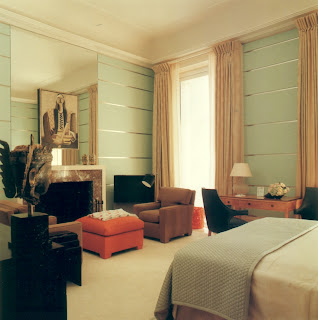 This flat – three floors in a George IV London terrace – can hardly be said to have stood the test of time, given the short time (five years) since it was published. Yet one feels it may well. This interior feels timeless to me and herein lies the difficulty of using the word timeless about a present-day interior: none of us are prophets. Pundits certainly, writers with deadlines, probably, but not prophets. In its coherence, the design certainly illustrates the principle of harmonious selection as stated in the quotation above. There is harmony of line and shape, size, texture, color and perhaps the most important of all, idea.

The owner of the London flat is the previous owner of another equally timeless, if larger, residence in France decorated – not entirely agreeably, according to Rory Cameron – by Billy Baldwin. The Palladian front of La Fiorentina is timeless, if only from the point of view that its roots are traced back to ancient Greece – the basis of Western architecture whether by imitation, adaption or, in the twentieth century, rejection. 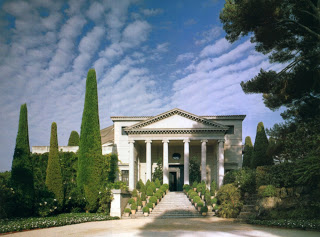 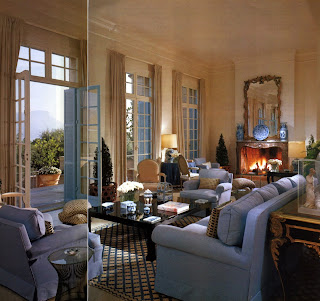 To my eye, Roderick Cameron's older version of the La Fiorentina salon has stood the test of time better than Billy Baldwin's. 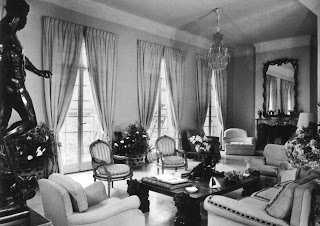 I will be exploring the topic of timelessness and harmony more in coming posts. I welcome your thoughts as I continue to attempt to pin down this will o' the wisp concept.

Photos of La Fiorentina by Durston Saylor for an article written by Aileen Mehle for Architectural Digest, January 1999. First used by me here in my post A man of most remarkable taste.

Photo of Roderick Cameron's Fiorentina sitting room from here (unattributed as far as I can tell, accompanied an essay written by Steven L. Aronson for Architectural Digest, October 2001). From my essay A lovely absence of color.
Posted by Blue at 4:23 PM 21 comments:

Conversing with a New York taxi driver is rare and the long, friendly talk we had with a female driver was a first. It was remarkable enough for the Celt to mention this – not like him to state the obvious – for, it turns out, there are only 150 female taxi drivers out of 40,000 in New York city. She heard our accents, we heard hers (native New Yorker) and we chatted comfortably until we got to our Midtown hotel. This is what I love – soundbites, as it were, of people, often at work, going about their lives – no grandstanding politicians or priests for me. The Celt tells me I'll talk to anyone, any time, about anything, and, seemingly, there's a hierarchy: dogs; babies; waiters; bartenders; taxi drivers, and the poor person sitting next to me wherever I might be. Who knew? 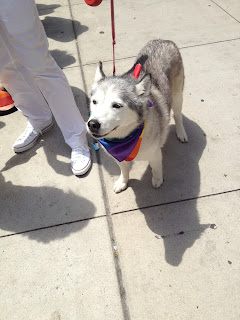 In the hangar-like waiting room of the New York City Clerk's Office last week I talked a little with a partially-limbed man (a veteran, I think, though I did not ask) in a wheelchair waiting with his handsome partner to get married. The twinkle in his eye is what drew me to him – a twinkle, flirtatious and unexpected, that carried all the happiness he felt and which reflected mine, for I too was getting married to my own handsome man.

Sitting next to us was a ninety-one-year-old man waiting for the license to marry his fifty-four-year-old partner (together twenty years or more), making acerbic comments, in an accent that reminded me of old recordings of Franklin Delano Roosevelt, about Associate Justice Scalia. And as I listened to his patrician tones and looked around at the combinations, gay and straight, it occurred to me again that love is not blind, for all we would believe it so. No respecter of persons, Eros, and not for nothing did the Greeks portray the godlet as a capricious youth.

I was back in Atlanta, last Friday, congratulating our waiter on his newly-married status, with the Celt at my side on the banquette, his Negroni to hand. With us was my prof, patiently sipping her G&T, waiting to give us her gift (a fifty-year-old, white and blue, Meissen dish). She nodded as a very short skirt momentarily loomed tableside, and asked the Celt if she'd ever told him about when the mini-skirt first arrived in Atlanta. The waiter moved on and I listened up. Seemingly, when the mini-skirt made its Atlanta debut, it was not universally accepted as a garment a decent woman might wear. Thus one lunchtime at Rich's department store, one lady was heard to remark to her friend when a mini-skirt came into view "Oh, well. It at least covers the Great Divide."

There were many Great Divides that day in the City Clerk's waiting room – and not just those barely hidden by Spandex. A poor man's dollar, if you'll overlook a phrase from A Coalminer's Daughter, was much in evidence, and I had a lot of time to think how applicable it is in interior design – it is something I'd like to return to in future posts about timelessness.

The first book, Great Houses of London, is a handsome book and looks well on the coffee table – or on the knee when, early on those newly-married mornings, clutching a coffee cup, one realizes one has acquired not only a husband and new responsibilities, but also, officially, a mother-in-law with excellent taste in books – plus friends with a stated desire to organize a "bridal" shower. an OMG moment, if ever there was one. 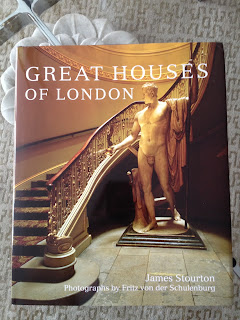 ".... Whether designing Sting’s London townhouse or residences for power brokers and social leaders in New York City, Palm Beach, or the Hamptons, Shelton and Mindel invoke their passion for constructing unified environments, where the elements of design and construction become more than the sum of their parts—they become comprehensive works of art. Shelton and Mindel’s luminous aesthetic is the centerpiece of this monograph. With stunning photography of their most important residential projects, each project delves deep into the modernist roots and philosophy of this exceptional design duo, and in turn the pinnacle of architecture and design today."

Shelton, Mindel &Associates: Architecture and Design is one of those books I bought in a "must-have" moment and, despite it being an impulsive purchase, I remain glad I did. In the Amazon blurb above the most telling phrase to me is "luminous aesthetic" – for light enlivens every page. On the other hand, there is a faded-in-the-sun look to many of the rooms but the powerful integration of architecture, space and light cannot be denied. Not a coffee table book, but it does look splendid on a Barcelona table. 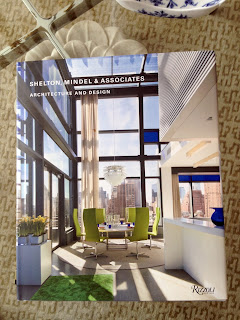 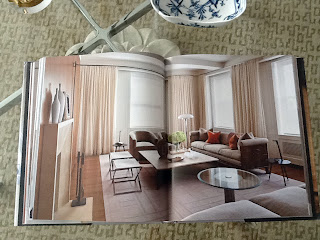 The third book, not a recommendation as I have not yet bought it or read it in depth, intrigues me not so much for the aesthetic but more for its connection with thoughts and reactions I've had over the past years about the constant harping on people like Chanel, Wallis Windsor and her husband, Diana Miftord, et al without ever mentioning the connections to fascist regimes. Those bloggers might argue that it doesn't matter, that noone cares and they may well be right. Nonetheless, for a number of us there are no grey areas, the matter is black and white.

Could I call what I want to write a philosophical rumination on art and politics, good and evil as does the blurb below about this book? Certainly, but not necessarily so grandiloquently. 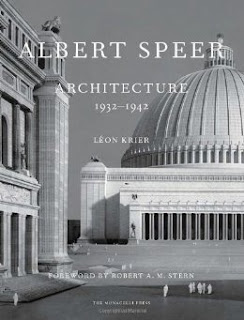 "Architect Léon Krier asks, “Can a war criminal be a great artist?” Speer, Adolf Hitler's architect of choice, happens to be responsible for one of the boldest architectural and urban oeuvres of modern times.

First published in 1985 to an acute and critical reception, Albert Speer: Architecture 1932-1942 is a lucid, wide-ranging study of an important neoclassical architect. Yet is is simultaneously much more: a philosophical rumination on art and politics, good and evil. With aid from a new introduction by influential American architect Robert A. M. Stern, Krier candidly confronts the great difficulty of disentangling the architecture and urbanism of Albert Speer from its political intentions.

Krier bases his study on interviews with Speer just before his death. The projects presented center on his plan for Berlin, an unprecedented modernization of the city intended to be the capital of Europe."

Oh, I really didn't think I'd enjoy myself despite but the concert by these talented musicians was one of the best evenings of my life.
Posted by Blue at 8:42 PM 13 comments: