"Well, at least nowadays I don't buy too many," I said. The Celt, born tactful, forbore from commenting or even glancing at the growing pile of books by my chair - my old professor is retired and culling her library - as I unwrapped two parcels I'd just collected from the mailroom. I really don't buy too many books, though I suppose that depends on what the definition is of too many books.

Of late, I have found it difficult to buy interior design books - I'm willing and have the means, yet despite the flurry of publishing in the last month or so, I find so little of interest on the bookshelves. I know that, as I've aged, I have become very critical about the content of a book and consequently am loath, as I once was not, to buy examples of vanity publishing or compendia of this, that and the other, whether allegedly curated or not. I wish I could dismiss the impression of an ever-and-increasingly-revolving cycle of nonentity, but seemingly cannot.  Maybe, as you might well infer, I feel I really have seen it all. 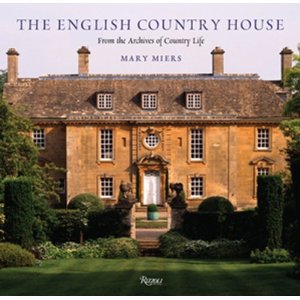 One book I have wanted for a while now, and the first to be unwrapped, is The English Country House: From the Archives of Country Life. It is a big and heavy book, filled with the most beautiful houses photographed, with nary a vignette (but plenty of close-ups of details, certainly), all sixty-two of them, since Country Life began in the 1980s to publish photographs in color. These photographs have the rare quality of being as attractive and as texturally rich as were the black-and-white photographs of the previous decades. There are plenty of full, explanatory captions and, tipped-in, six essays by the likes of Marcus Binney, Tim Knox, John Martin Robinson, Geoffrey Tyack and Jeremy Tyack. Too heavy, without benefit of a lectern, to read in bed, but a joy to leaf through early in the morning, coffee in hand and brain on resurrect, this book is example from Rizzoli on how to produce, publish and persuade. 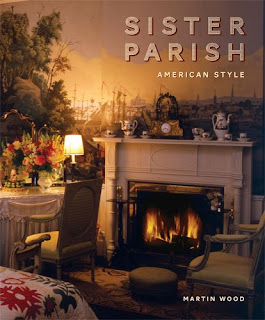 Had I not already owned Manhattan Style; Sister: The Life of Legendary American Interior Decorator Mrs Henry Parish III; Parish Hadley: Sixty Years of American Design; Albert Hadley: The Story of America's Preeminent Interior Designer; Designing Camelot: The Kennedy White House Restoration; The Inspiration of the Past: Country House Taste in the Twentieth Century or Colefax and Fowler: The Best in English Interior Decoration, I might have found Sister Parish: American Style more interesting than I did. Please don't misunderstand: I am definitely glad I bought the book which is well-produced and designed by someone who knows, perhaps too well, the discipline of the grid. A few times I wished some photographs had been larger, and I really felt I had learned nothing new - a negative comment made by Mrs Parish about Mrs Onassis, notwithstanding.

Have I really seen it all? I wonder.

My magazine subscriptions have dwindled to two: The World of Interiors and the New Yorker; one taken since 1983 and the second given to us as a Christmas gift when we came here eighteen years ago. We read them both, still, after all these years. It is not that I let the other subscriptions lapse - one, as I mentioned a while back, I cancelled because I found I had unwittingly or, rather, unwillingly, agreed to a constant renewal service, and the second I cancelled for the same reasons. In the second case I learned during a phone conversation in the entanglement the 1-800 menu that my subscription had just been renewed until 2014. With neither magazine is a constant renewal service, and I use that word "service" advisedly, worth my while. I look into both, and others, in the bookstore but having learned to resist such blandishments as go for classic with easy, unfussy details or go for graphic from window to walls or, my favorite so far, go for big gestures and make it fun I put them back on the shelf. 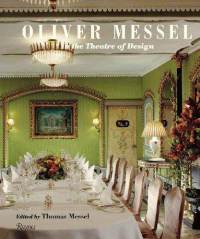 I was curious about the third book, but waited to order it until I'd had a chance to leaf through it in the bookstore. I have an older book about Oliver Messel which is interesting enough but left a lot to be desired. I was curious - and was pleasantly surprised to find that Oliver Messel in the Theatre of Design could be a good addition to our library. I confess that in the past I have found Messel's style more than a tad twee, too redolent of the high-pitched precious accents of the British elocution schools. I must say his much-lauded tropical architecture baffles me - at least, the lauding baffles me. However, not wishing to appear negative about a book I'm actually glad to own and look forward to reading more of, I shall explain where my irritation lies.

One of the pleasing things about book design to me, indeed one of the most desirable, is where the layout does not detract from the contents. Such, alas, is not the case with the Messel book. It is with the layout, the graphic design, that my irritation lies - by the time I got to the Contents double-page spread and the Foreword page I was grousing about the page layout and the typography, muttering to the Celt, "look at this, look at this!"

How, you might be asking, did I not spot this at the bookstore. Actually I did spot it but, in my desire to have the book, I suspended my disbelief. I am not returning the book, because the contents are good enough to transcend the irritations of the layout, and give me a better understanding of who Messel was, and what his achievement was.

The other morning at the only surviving bookstore in this part of town, ready to be persuaded despite the histrionic title that I really needed to have the latest book by a well-known decorator, an erstwhile favorite of mine, and someone, I'm sure, nominated tastemaker and trend-setter many times over. I wasn't going to buy the book then and there because, being willing to defer gratification by a few days, I intended to order it online. In the end, though, after going through the book twice, I decided not to buy it at all. When a book, to my eye, is nothing more than a series of vignette after déshabille vignette, I find, much to my and undoubtedly the Celt's relief, that I no longer can be persuaded that I really need a book for its potential historical value, especially when, disconcertingly, I hear myself saying I might not live long enough for it to become history. 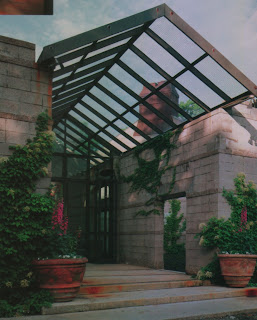 However, this isn't going to be a criticism of that particular decorator's work or even about the fatuous language used when writing about celebrity interior designers (tastemaker and trendsetter) or those that wish to be so - rather more a plea for fewer vignettes and less styling thereof.  Perhaps I'm being lazy, but sometimes it's hard to understand how a room as a whole works. I'm sure I don't need to elucidate because you've all seen the petal and leaf bestrewn table tops, the asymmetrically arranged mini-gallery of mini-art, assortments of trinkets disposed on bookshelves and on and under tables, darling little lamps on kitchen countertops ........ well, you've seen 'em all and possibly loved 'em all as well!

Dear reader, it is what it is. 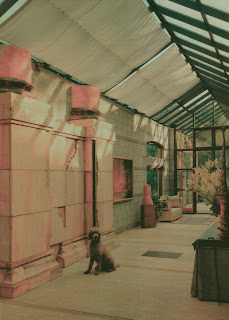 One of the more restrained and interesting riffs on the Post-Modernism of the 1980s, a mix of allusion and illusion, modern with the seeming old, David Whitcomb's four pavilions connected to a long hall, an eighty-five-foot-long spine, set high on a ridge overlooking the Hudson River was, I thought at the time, one of the most exciting houses published in the 1980s. I still find it interesting but, to be honest, not quite as exciting as it once was.

Perhaps my eye is a lot more critical than it was twenty or thirty years ago and Whitcomb's house is very definitely of its time. Not that I wish to imply that for a house to date is a bad thing but there are some decades, being afflicted by extremes as were the 1980s, that have a very strong flavor and cannot but date. 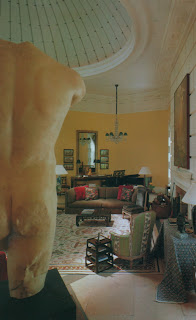 I struggled with what I wrote above (a train of thought I still cannot complete) about as much as I struggled with the feeling that sometime during the the late spring and early summer I crossed a personal Rubicon, and over the last month I came to realize my own "summer stream"(to misquote H V Morton)* had dried up. Many a time I've opened this post to continue writing and each time I went away frustrated with myself. It is clear to me, much as did the Rubicon of old, I must set a new course. 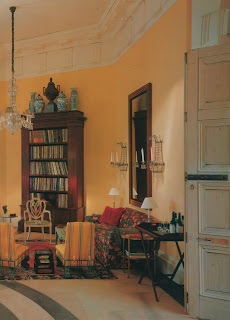 *H V Morton, a fellow Lancastrian, prolific travel writer and, for me, a newly-discovered pleasure and one of the positive aspects of what I suppose has been a kind of writer's block. In the hopes of finding a remedy, I haunted the university library and found many a book to occupy me and dampen my frustration - Max Beerbohm's A Christmas Garland, E M Forster's short stories The Life to Come, Tiger in the Smoke by Margery Allingham, Kate Atkinson's Started Early, Took My Dog, Wilde's Devoted Friend by Maureen Borland, and Chasing Aphrodite by Jason Felch and Ralph Frammolino.


A Traveller in Italy by H V Morton, not actually found in the library but given to me recently by my old college professor - a happy coincidence given that we are planning our own travels in Italy - is a such a pleasure to read. I cannot say travel writing is a genre that has heretofore particularly interested me but I can see me reaching for more of Morton's books, especially those about Rome. The Fountains of Rome was a darn good read if a little too heavy (physically) for bedtime reading.

"A few miles north of Rimini, on the coast road to Ravenna, I came to a trickle of summer water that was flowing under a bridge. Its name was the Rubicon. It was once the boundary between Cisalpine Gaul and Rome, and any general who crossed it with his army, without the permission of the Senate, was committing rebellion. Caesar crossed it because his spies had told him that his enemies in the capital were plotting his downfall, and he knew he had to march on Rome or perish.........

"It is curious how often famous rivers fail to live up to their associations: the Tiber is not much to look at, and the Jordan is hardly wider than the Rubicon. In winter, of course, the Rubicon, like all torrents, would be formidable, and Caesar forded it on January 10, in the year 48 B.C., which, as the unreformed calendar was about seven weeks ahead of the sun, would really have been during the November floods. As I stood looking at this stream, to me one of the most thought-provoking sights in Italy, cars, motor-cycles, scooters, coaches, and caravans continued to rush past; and during the few moments I was there several hundred people must have crossed the Rubicon without being aware of it." 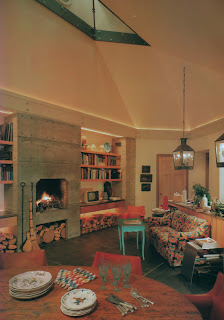 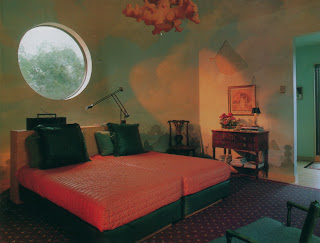 Photographs by Langdon Clay to accompany text written by Gini Alhadeff for Architectural Digest. Architecture by WM. Richard McGilvray and interior design by David Whitcomb. I cannot cite the date of publication yet. 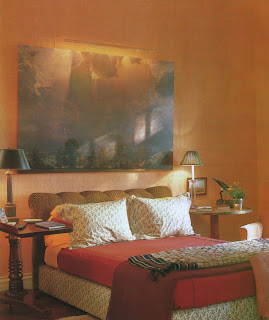 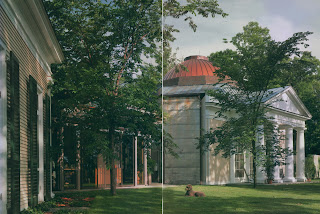 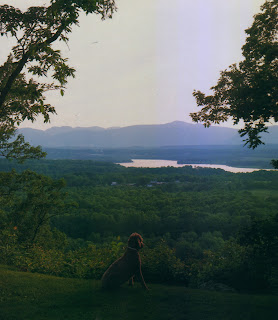