Years ago, before the onslaught of truth-in-advertising-standards, Britain's elderly, when in need of a tonic, were tempted by advertising for a very popular fortified wine that promised, or at least implied, that a tipple of the sweet sherry-like substance drunk on a daily basis, would be fortifying for the nerves.

In that sentence I purposely used a phrase that in weaker moments can drive me to needing a tonic - in my case a Manhattan. "On a daily basis," is a construction, like "on a regular basis" that makes me grind my teeth. WTF is wrong with good old-fashioned "daily" or "regularly?" Why use four words when one suffices? "Double-check" is another, though, having once worked for someone whose default was "doublecheck," there may be more than a little prejudice about that particular phrase. "My fine china and crystal" - to my ear elided as "myfinechinaandcrystal" is enough to make me reach for my hip flask if not my revolver.

Having recently spent a few days with my fellow-original-countrymen, I know, believe me, how heinously intrusive stock phrases can be. Brits use "pop" all the time -  as in "I'll just pop down to the slaughter-house" or "be a lamb, and just pop this in the oven" - pop, pop, pop, all over the damned place! On the subject of "pop", could we just stop using the phrase "pop of color?" Please?

I caught myself using what, around here, is a typical response when asked how one is. "I'm good," said I to my mother-in-law when asked how I had been. Of course, what I meant was that I had been well - the moral aspects of my character having nothing to do with it at all, at least to me. 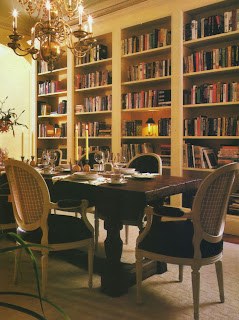 Our fine china and crystal? Wedgwood and Yeoward, of course. Which reminds me, I need to pop the dinner in the oven, and before the neighbours pop in for a drink, the Celt has his orders to pop into the supermarket for things we need on a daily basis, and I'll need to pop into the bathroom to freshen up, but first, let me just double-check the spelling and I'll click "post" and pop this into blogosphere. 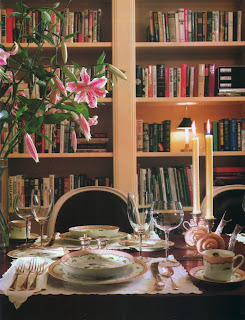 I found these pictures of a dining room by William Hodgins in the same batch of clippings the photographs of Arthur Smith's house came from. I'd had these photographs since 1983 and the room with its delicious combination of dark wooden table surrounded by white-painted chairs and flanked by bookshelves seems as fresh and inviting today as it did nearly thirty years ago. A tonic indeed.

Photographs by Peter Vitale accompanying text written by Francis Levy for Architectural Digest, May 1983.
Posted by Blue at 7:20 PM 14 comments:

Early this morning, before class started, I began a conversation with two students about reading, assuming that they'd enjoyed researching, reading and completing the writing tasks that were due today. I shouldn't have been surprised to hear that neither of them read for pleasure: reading to them means cramming the evening before a test. I admit that two students may not be representative of a generation (both students are in their early twenties) but I wonder if typical they may be. The recent statistics about the drastic drop in hard-cover and paperback book sales make me wonder who is reading. Is it just old fogies like me? When I and my like die, shall we, anachronistically, have represented an era - one, it occurs to me, that is already long-gone. If you'll forgive an Ecclesiastes reference, I wonder if the time for planting became the time for uprooting without our realizing, for beyond what we read bookstore and library closures and the loss of jobs, there is the closing of the collective mind. 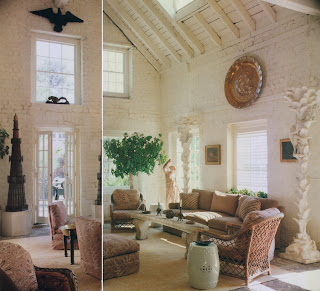 Not quite what I set out to write after a fortnight's blogging silence, that first paragraph, but I must say recently I have found it increasingly difficult to stay on track. I've been occupied with things other than interior design - newly married friends gave a dinner party, the Celt's family from France, Scotland and New York were in town - averting my gaze, as it were, from the fact that that I find little of interest in modern decorating.

"He who dies with the most toys wins" - a phrase current in the 1980s and one not easily forgotten if, like me, you are a lover of simple, uncluttered interiors - though my use of the word "simple" is perhaps a little disingenuous for it is not simplicity per se, but a distaste for the self-consciously artless, the ironically unpolished, the carpingly self-effacing or the profligately vacuous.

I realize there are limits to looking back to 1980s and 1990s interior decorators - those men, generally speaking, whom I call the Lost Generation - and a time must come when that particular seam is mined out and a new direction must be found. That said, yesterday I found another Arthur E Smith interior (his own, a carriage-house and second home, in Charleston, SC) in a batch of old magazine clippings - an article saved because of the house and its interiors, not because of the decorator, for those days, I think, I had little idea of Smith's role in my recurring theme of connections within connections. 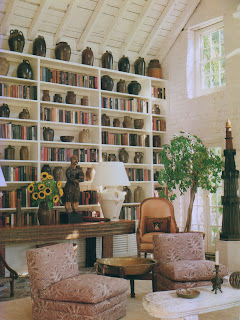 I wish sometimes it were not possible to think in terms of class and I'm very aware that we Americans find it a difficult subject to discuss - almost as difficult as the existence of bidets - but this interior of Arthur E Smith's is entirely driven by class, and one based on education of both the mind and the eye.

It could be argued that there's a correlation between the number of mass-produced and faddish accessories, the owner's aspirations and the suspension of disbelief with regard to marketing. Fads make fools of us: witness the dominance of the so-called Belgian style - the greyest of styles deriving from the antique shops of Axel Vervoordt and other Brabantse antiquairs and decorators and now devolved via trend-driven decorating magazines to mall and catalogue. The style could be Belgian, French Provincial, Gustavian, English country house - the name doesn't matter. What matters is that we keep on buying the furniture store vignette (remember that annoying tune "buy the room, get the ....") much as we might buy an outfit put together by a clothing store clerk. That's what matters. 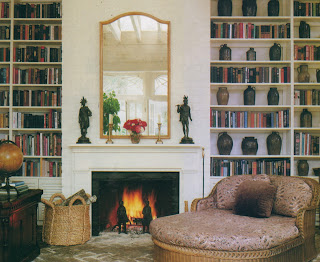 Photographs by Peter Vitale to accompany text written by him for, I think, Architectural Digest. I clipped and did not note magazine, issue or date. If anyone can tell me so I can correct this, I would be grateful. Also, if anyone can identify the print on Smith's wicker chairs I would very much appreciate it. I know it was from Brunschwig et Fils. 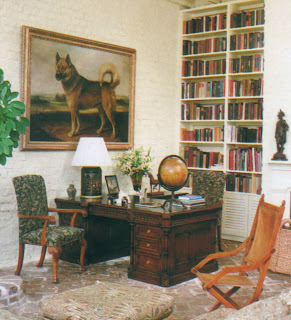 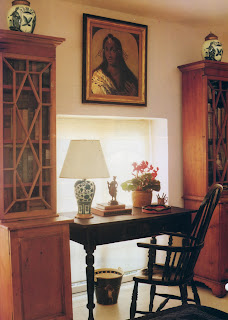 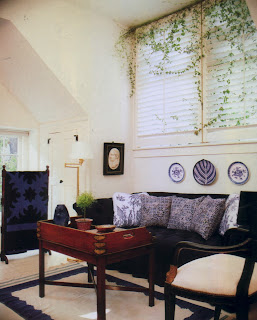 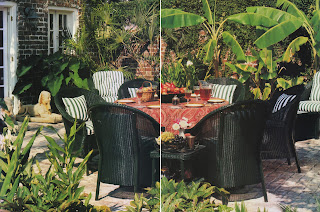 During the last few weeks as my life creaked its way to back to normality, I did much planning of the country house that looms large in my imagination and which, despite all my attempts at getting us to reconnoitre lake and mountaintop, we have yet to buy.


It's the English half of me, I think, that longs for a house in the country - I read somewhere an acerbic comment that when Brits make a pile of money they all head for the country, heads filled with notions of joining the gentry, to refurbish every bothy, parsonage and manse in sight - whereas the American half rather would like a snappy little cottage, fit only for ourselves and a couple of friends, atop a gusty dune by the ocean. The Celt, raised as he was by parents who for various reasons lived in the Scottish hinterland, considers the countryside nothing more than psychical and cultural wilderness, brimming with rain, flies and shit. Undeniably, the countryside does have a lot of each, but my relationship with a romantic idea remains strong despite me knowing that, were I there, I'd probably spend a lot of time sloshing, swatting, dodging and squelching. The Celt, as I say, does not think as I do.
I can accept that one might, romantically, wish to connect the interior of a country house to its surroundings - give a nod to the spirit of place, as it were. I accept, also, that in the language of design there is a degree of cant - conventions and pieties that seem to express an esoteric level of connection. For example, the once de rigeur phrase bringing the outside in has been supplanted by a more mystical honoring of the landscape beyond the windows - a paying of tribute, nymph-like, to the trees, the streams, the flora and fauna. What it means, of course, is that wicker, grass, rust, distressed paint, driftwood, flour-sack pillows, litters of herbal, avian and floral motifs, even a jelly-jar or two, aflitter with lightening bugs, cosy up together with hand-adzed beams, reclaimed barnwood walls and floors, faded oriental carpets, crusty antiques from last week yesteryear in a tasteful tizzy of rustic whimsical cliches. None of it actually risible, if that is what you like or, at least, lust after, but to me it is about as real as the stylist's set pieces in magazines where one sees tea tables set out on a lawn or under trees - as if there wasn't a fly, mosquito, a chigger, flea, tick or snake within a million miles. 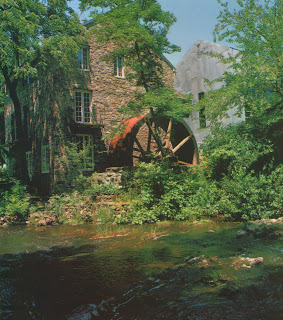 Our friend Will emailed to tell me about photographs of David Whitcomb's country house that he'd found and another friend kindly lent me the book. I recognized it immediately, of course - somewhere here there's a box of clippings amongst which is the original article about the house - I was so impressed thirty-odd years ago, when I saw the photographs for the first time. In fact I still am, and it's quite clear that Mr Whitcomb had no truck with a gimcrack pantomime of country life. His house, a converted mill, which he enlarged with a stainless-steel structure as simple as a child's building block, became his year-round residence after he gave up his city apartment. 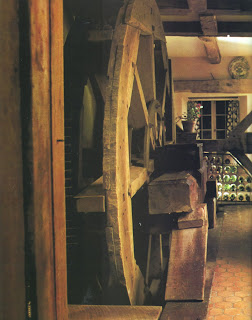 I could bang on about Mr Whitcomb's sense of place, his appreciation of the structure of the old mill, his taste in furnishing it, and how the more contemporary room, the steel studio, has stood the test of time, but I don't need to - its clear from these photographs.

And it's clear to me that this is precisely the kind of house I would like for us to inhabit. Oh, I don't necessarily mean a mill-house, though that would have its charms; rather, a house comfortably and amply furnished, cognizant of infirmity and youth, and with those most valuable of commodities: space, peace and quiet. 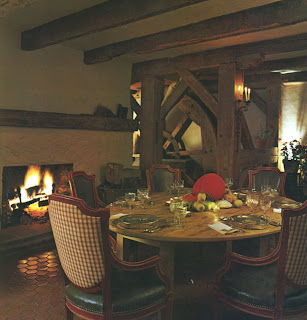 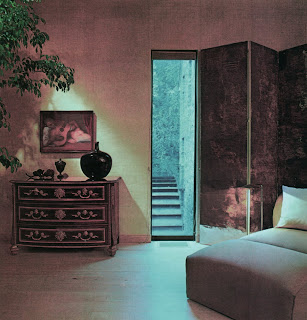 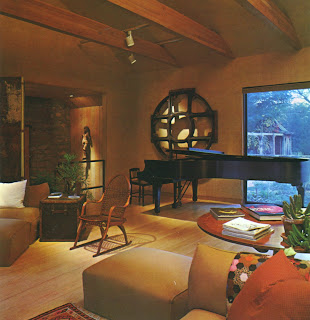 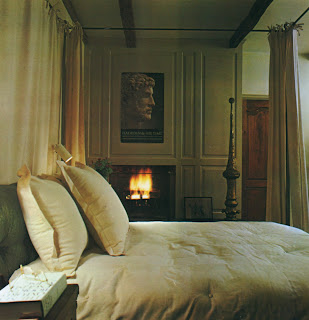 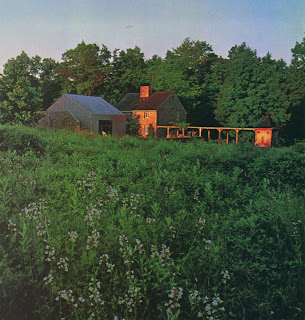 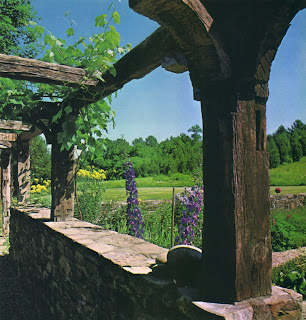