A Dearth in Venice

"Didn't we eat at Ristorante Antico Martini?" "We did.' replied the Celt. "It's an institution. Mind you, everything in Venice is a fucking institution." Lying on the bed, as I was, reading City of Falling Angels, I'd caught him at a critical moment in his morning decisions about what to wear and his reply,  atypically cynical, made me say that despite leaving Venice in dudgeon and rain, feeling we'd seen all there was to see and there wasn't any need to go back, I would like to return, but not to the same hotel. Answer came there none, as the decision about apricot socks with oxblood brogues was taking precedence.

A few chapters later, a choice of gilet and a broken shoelace notwithstanding, I began to find the book's Vanity Fair-esque tone irritating and ignoring "you've not read Vanity Fair since waddyacaller took it over" I closed City of Falling Angels and picked the next in the piles of books on the bedside table. Bringing Home the Birkin: My Life in Hot Pursuit of the World's Most Coveted Handbag not being entirely to my mood this morning, I rummaged further and found Nancy McClelland's The Practical Book of Decorative Wall Treatments. Before I continue, let me say in explanation that I have literary friends and they lend me books and I've rarely felt it polite to refuse. Consequently, the pile as of today includes the above-mentioned three plus John Lloyd Wright's My Father Who is On Earth; Treasure Hunt and The Age of Doubt by Andrea Camilleri; Lisa Hilton's Athénais; Kate Simon's A Renaissance Tapestry; The Dragon's Trail by Joanna Pitman and, finally, David McCullough's The Greater Journey. I can offer critique of none to them but can say I have, as it were, mental heartburn thinking of the riches yet to be digested. 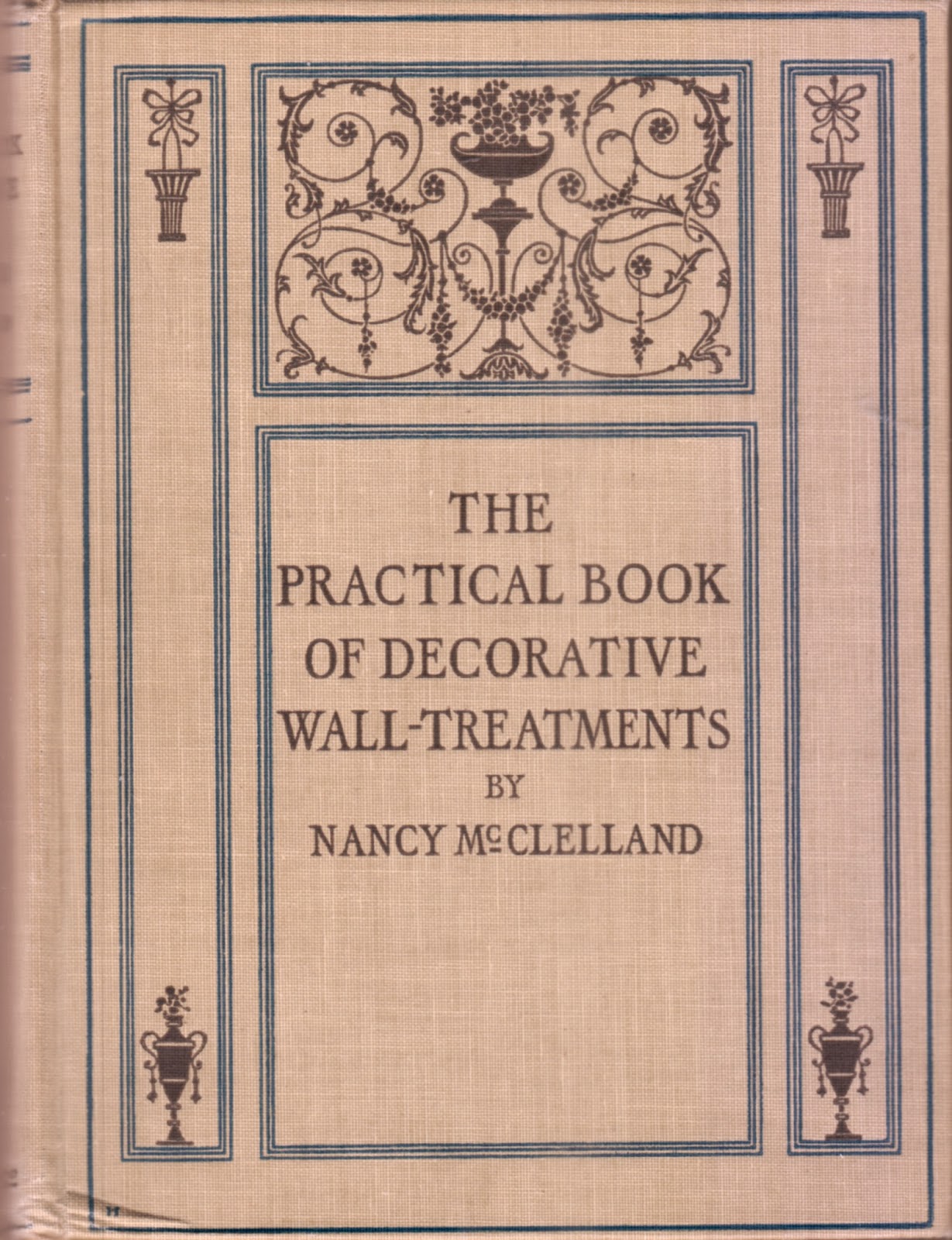 Old books, a bit like old people if they've lived or been on the shelf long enough have likely seen it all and are prepared to say so – "that's your inner voice, Grumbleweed"– and a book about walls and their treatments, published in 1926, has much to express in ways that, in modern times, are not untainted by trend-spotters and tastemakers. 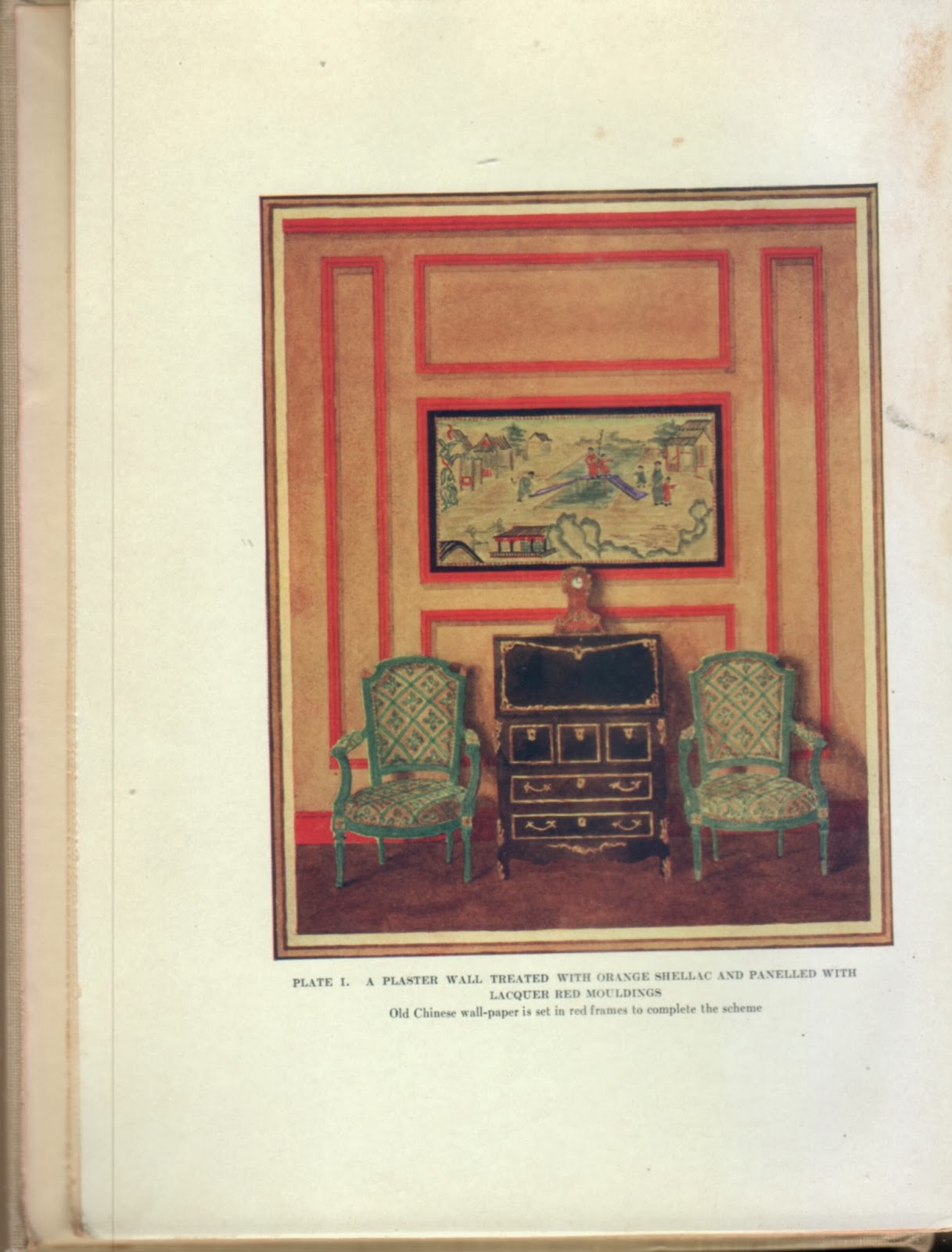 A plaster wall treated with orange shellac and panelled with lacquer red moldings. Old Chinese wall-paper is set in red frames to complete the scheme. 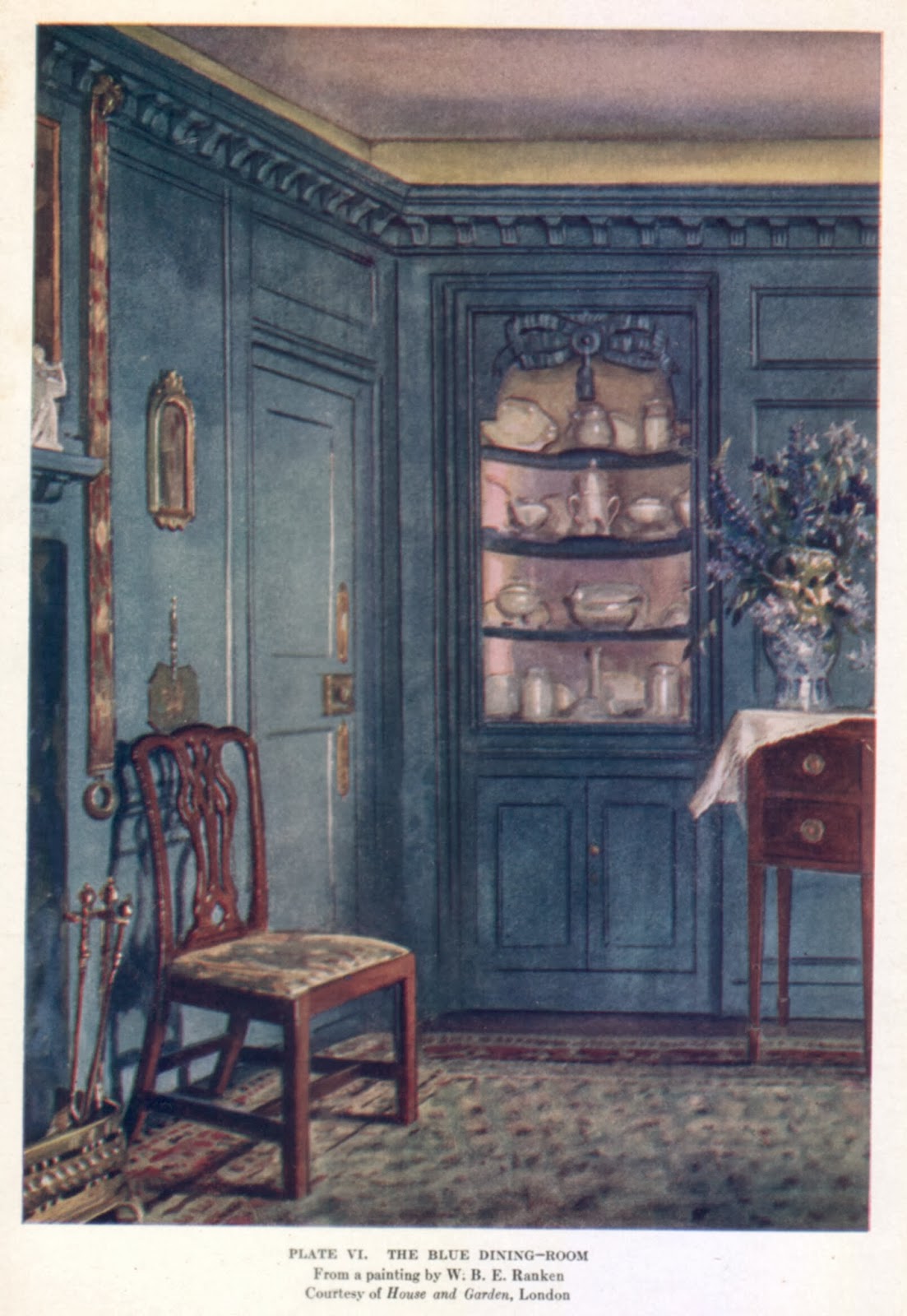 In the introduction to The Practical Book of Decorative Wall-Treatments, Nancy McClelland writes:

"By the canons of art a wall is required to be either a background or a decoration. At the outset it must make its choice. It must be one or the other – it can rarely be a successful combination of the two ....

".... Unquestionably the decorated wall creates problems that do not exist in the presence of the plain background. Where there is colour and design or architectural relief on the wall, a room is largely furnished before any movable pieces are placed in it. Whatever else is added must be a foil and a complement to the mural decoration. This is exactly the reverse of the treatment employed with a background wall, where the movable things in the room are the objects of chief importance.

"Colour and pattern, however, are by no means barred from the adjuncts of the room that contains a decorated wall. On the contrary, such a wall usually demands richness of hue and texture in the hangings, the floor coverings, and the upholsteries, to give it proper balance, but these furnishings must be selected discreetly and used intelligently, to be either subordinate notes or complementary accents in the general schemes." 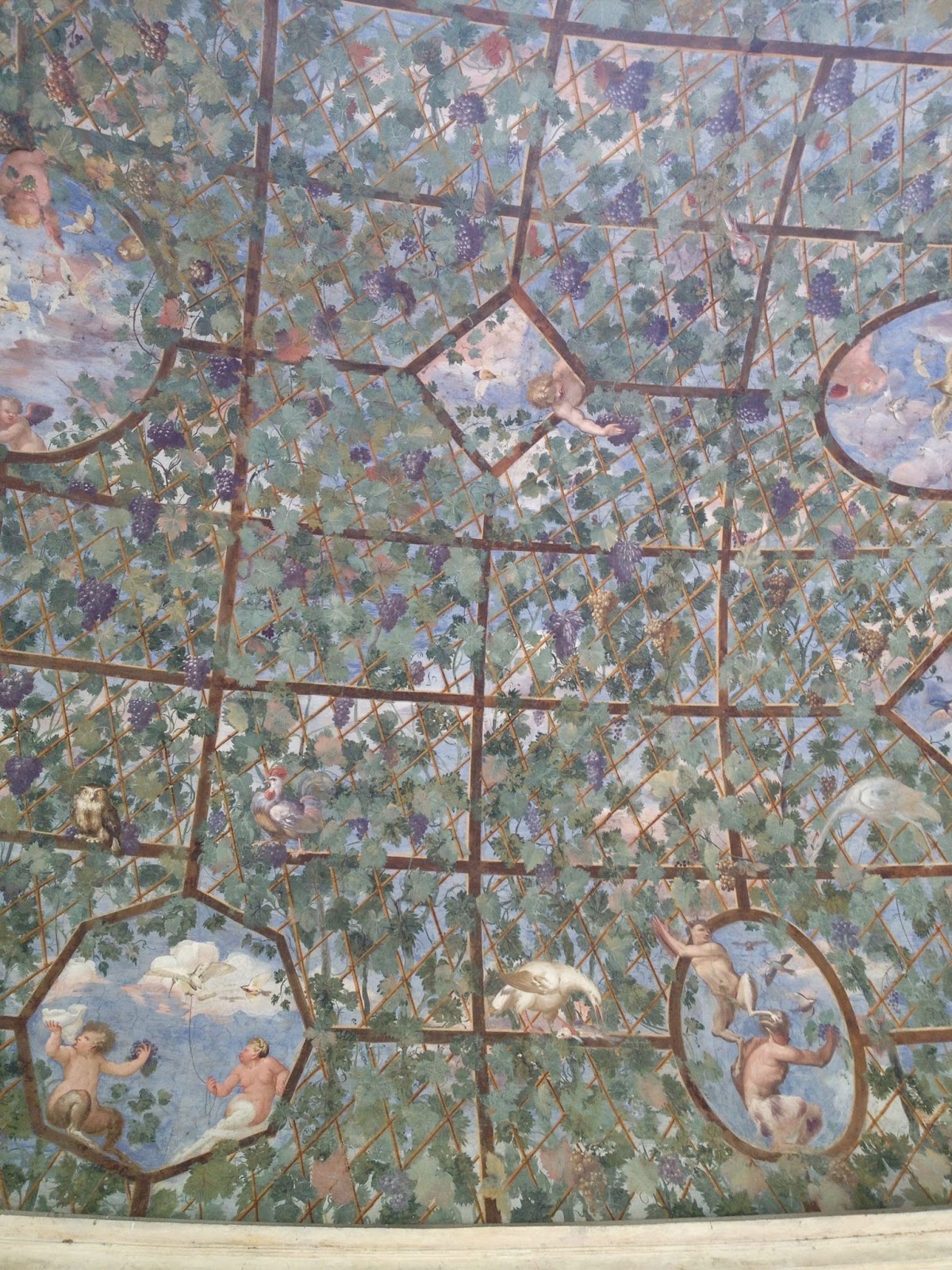 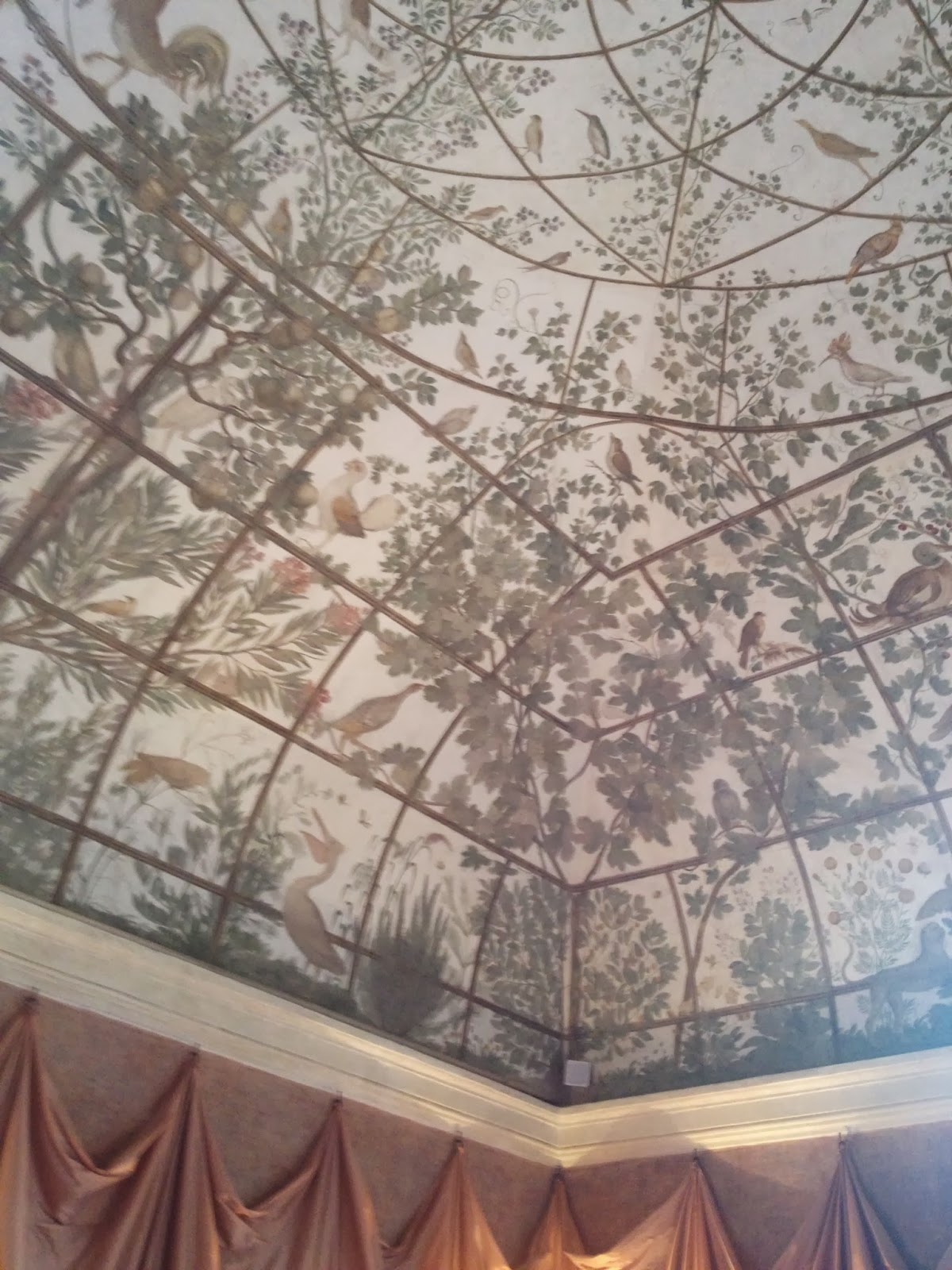 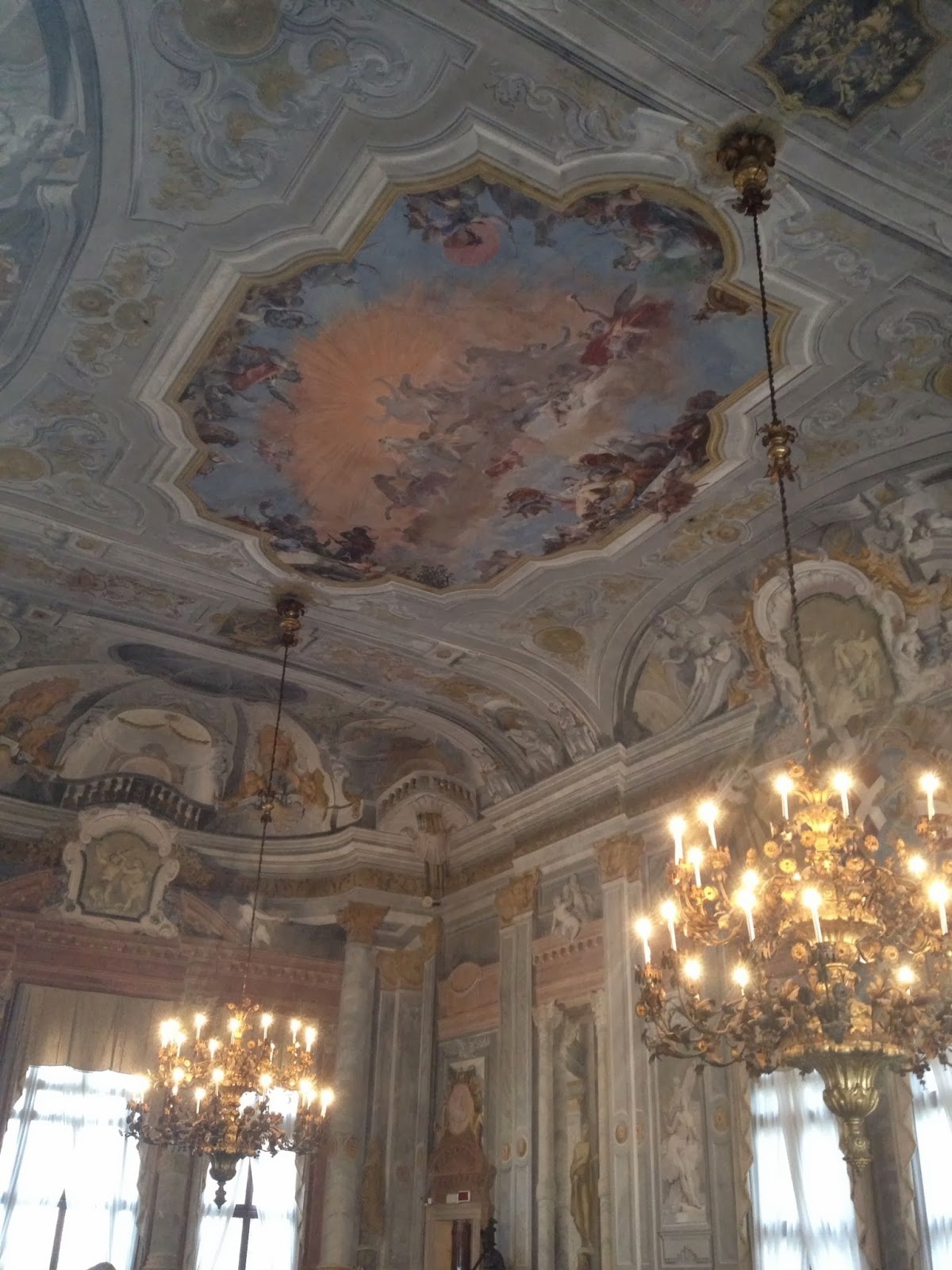 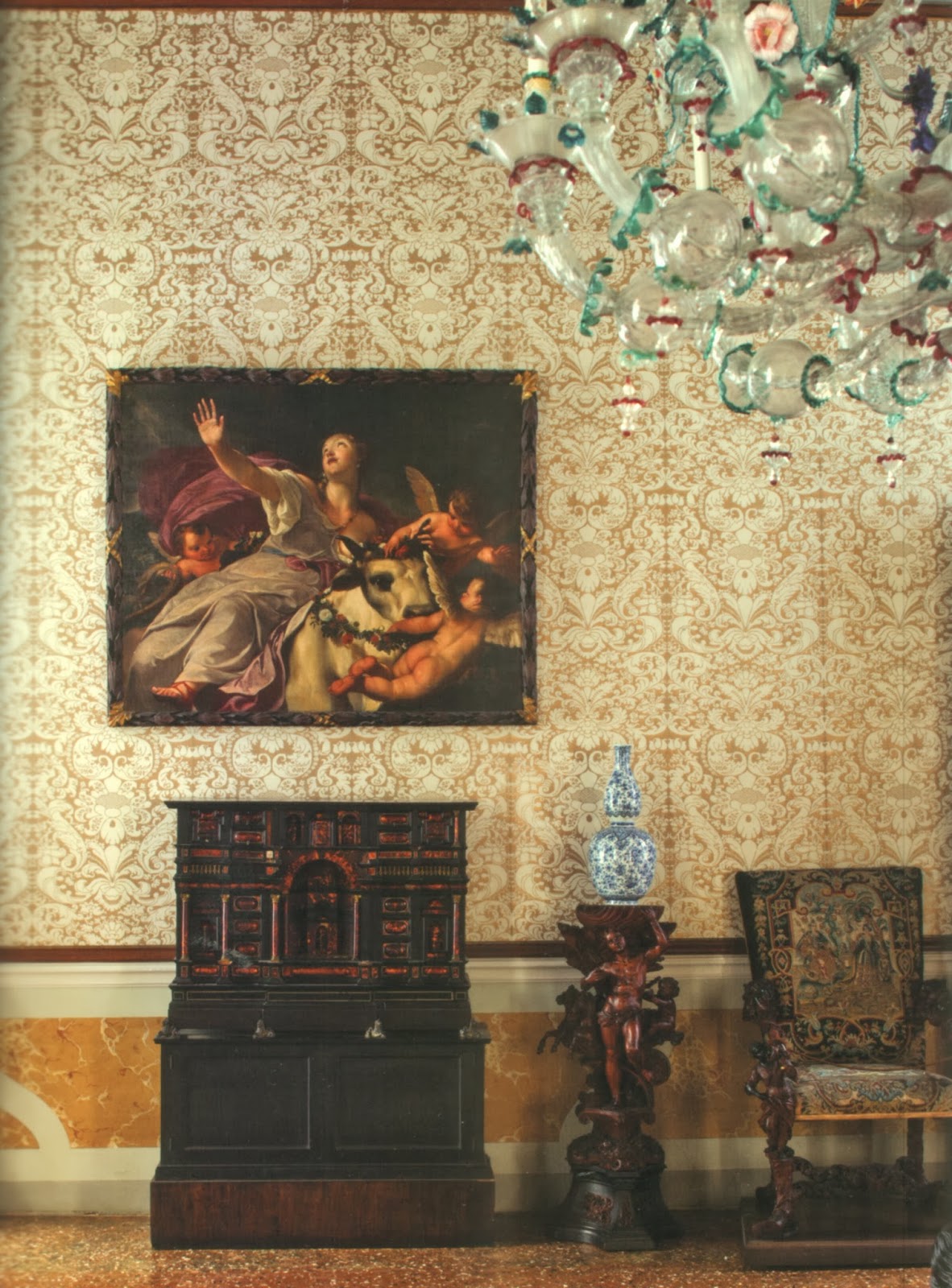 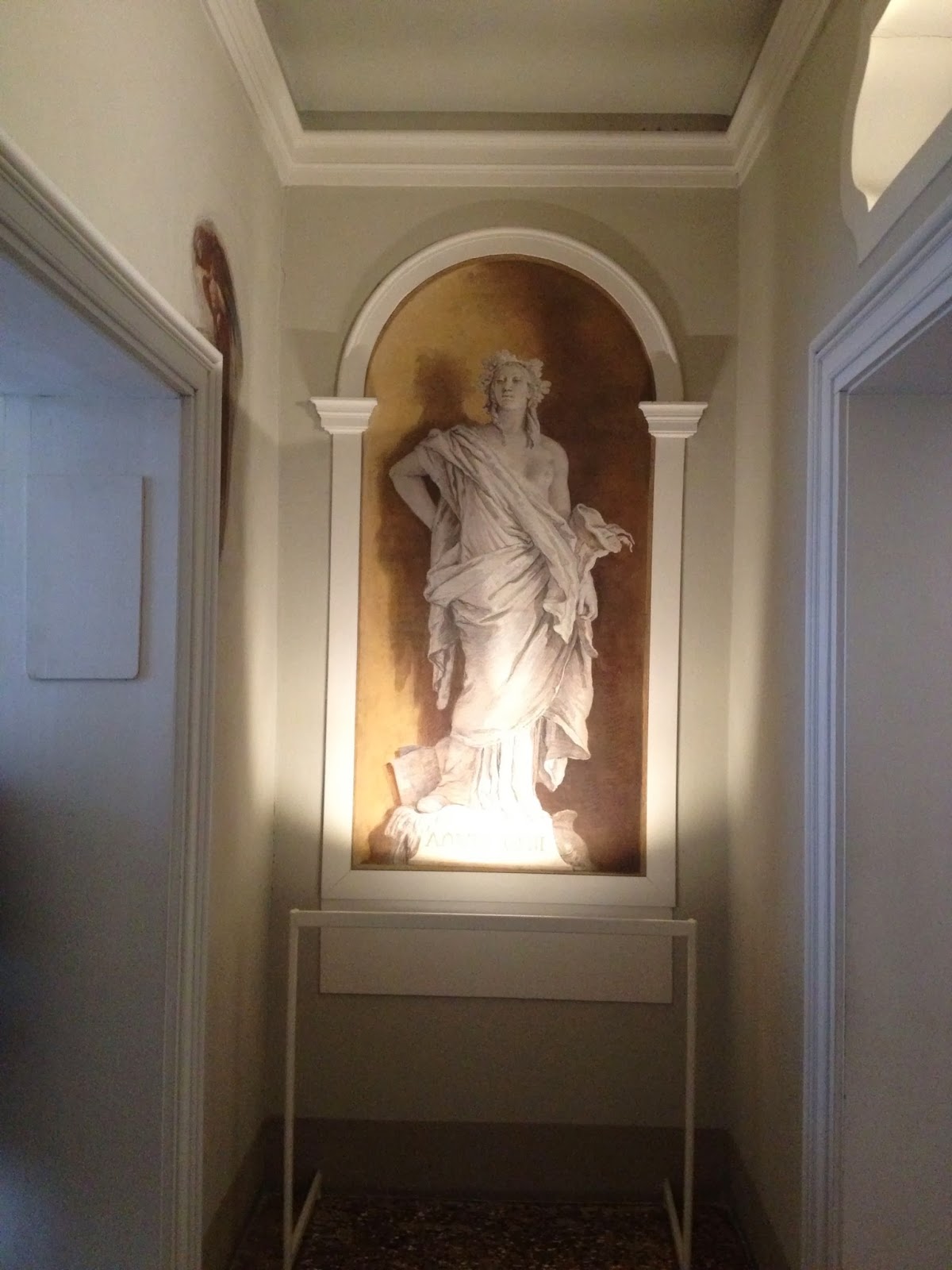 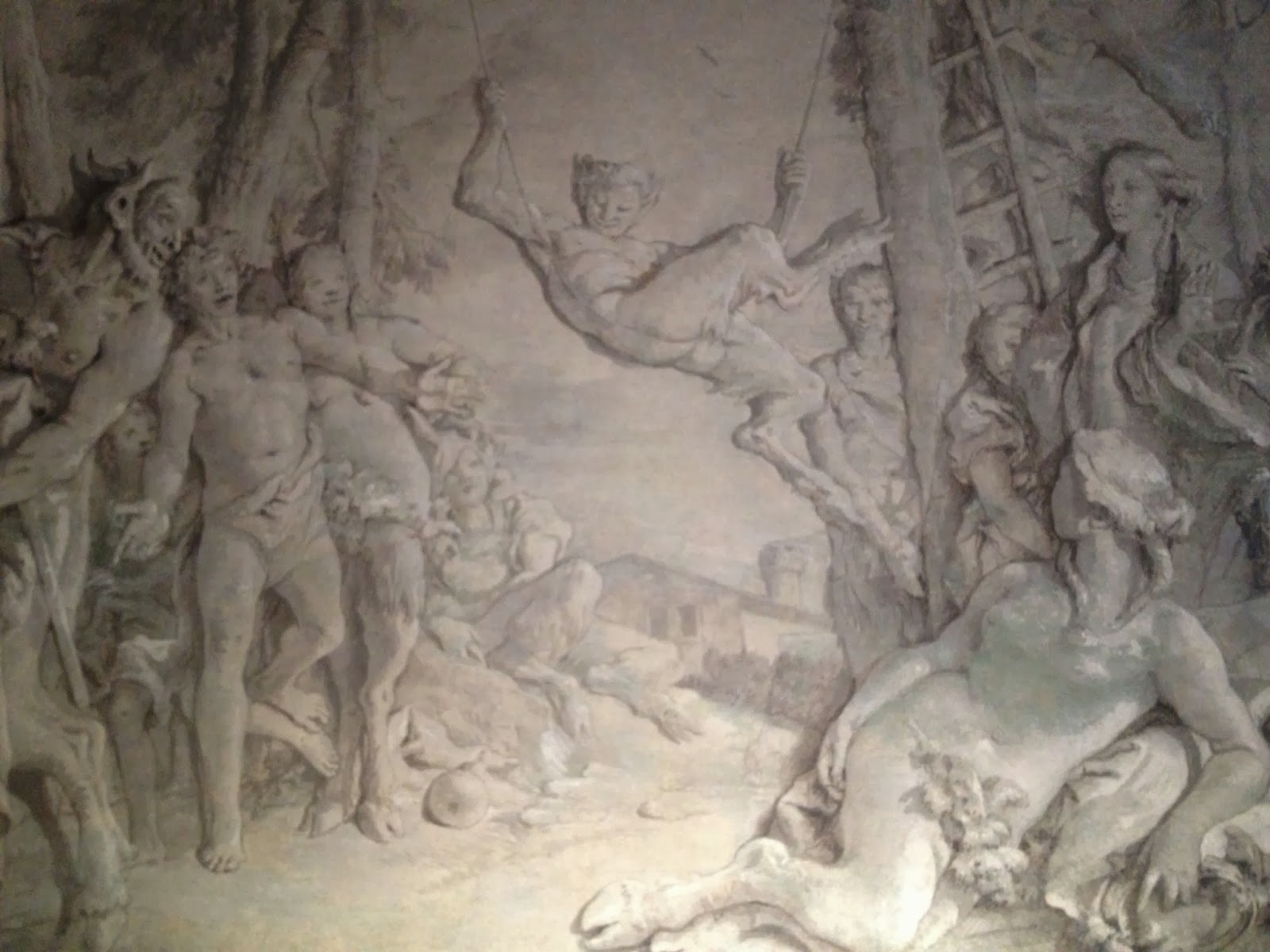 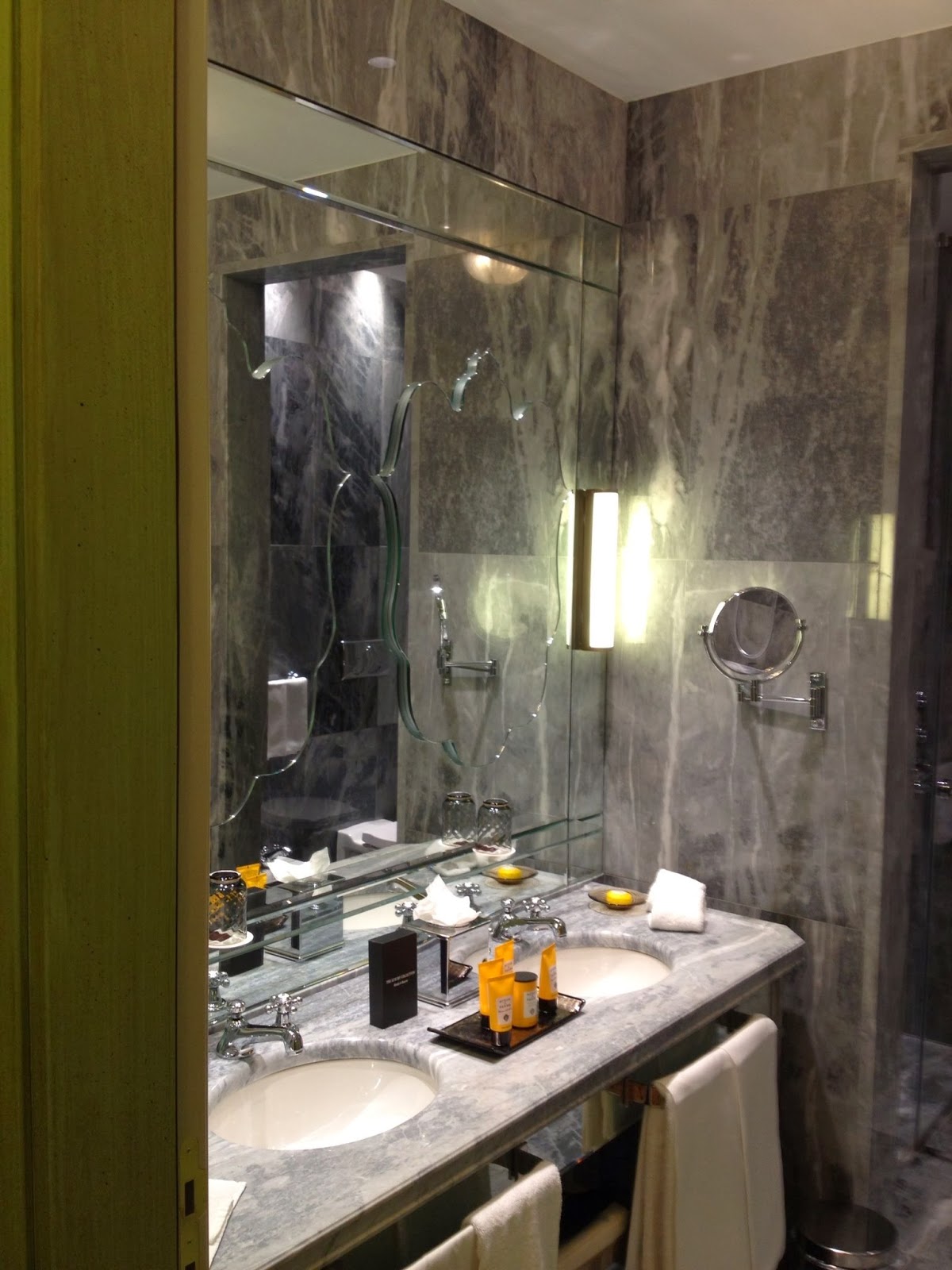 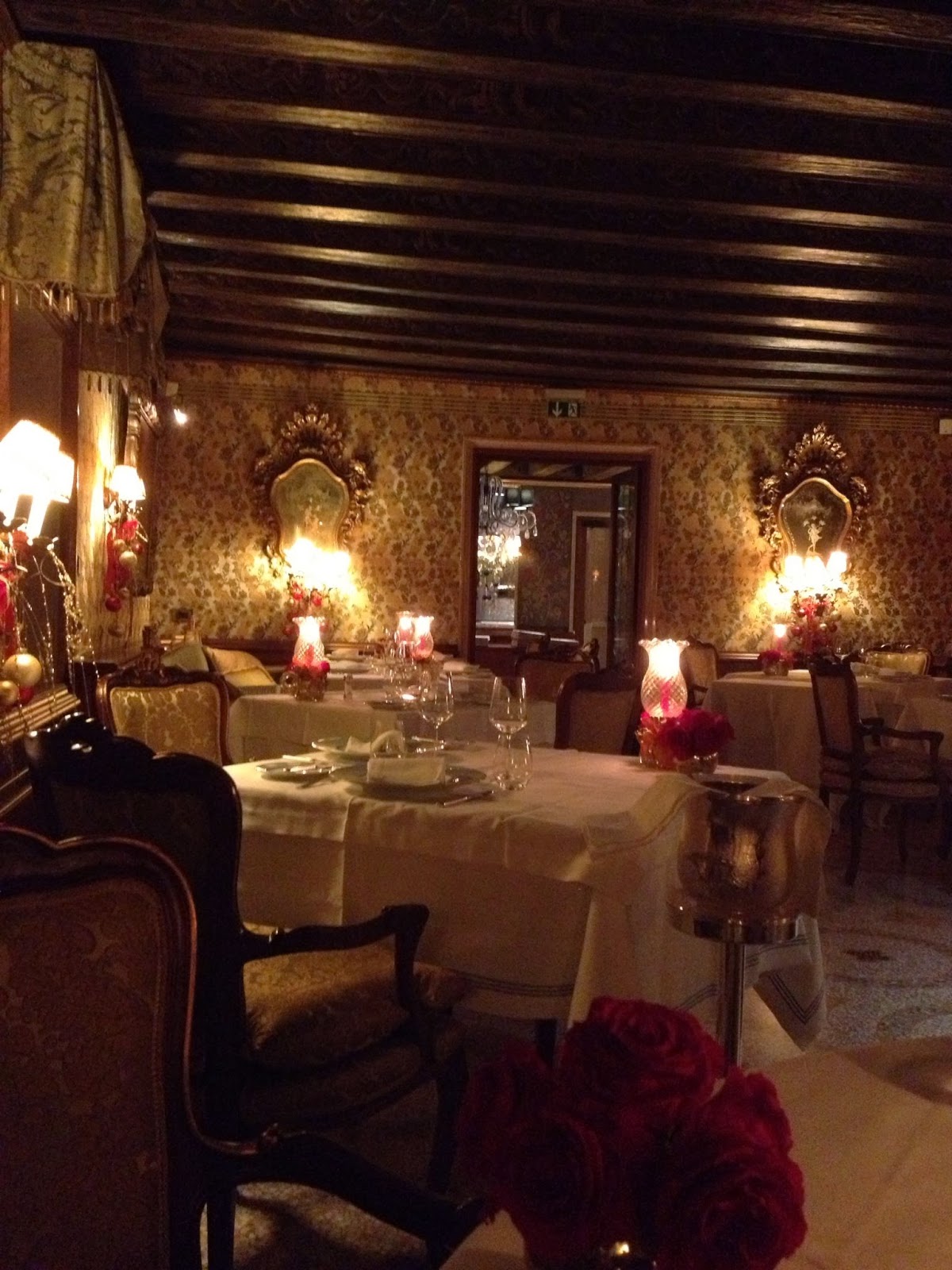 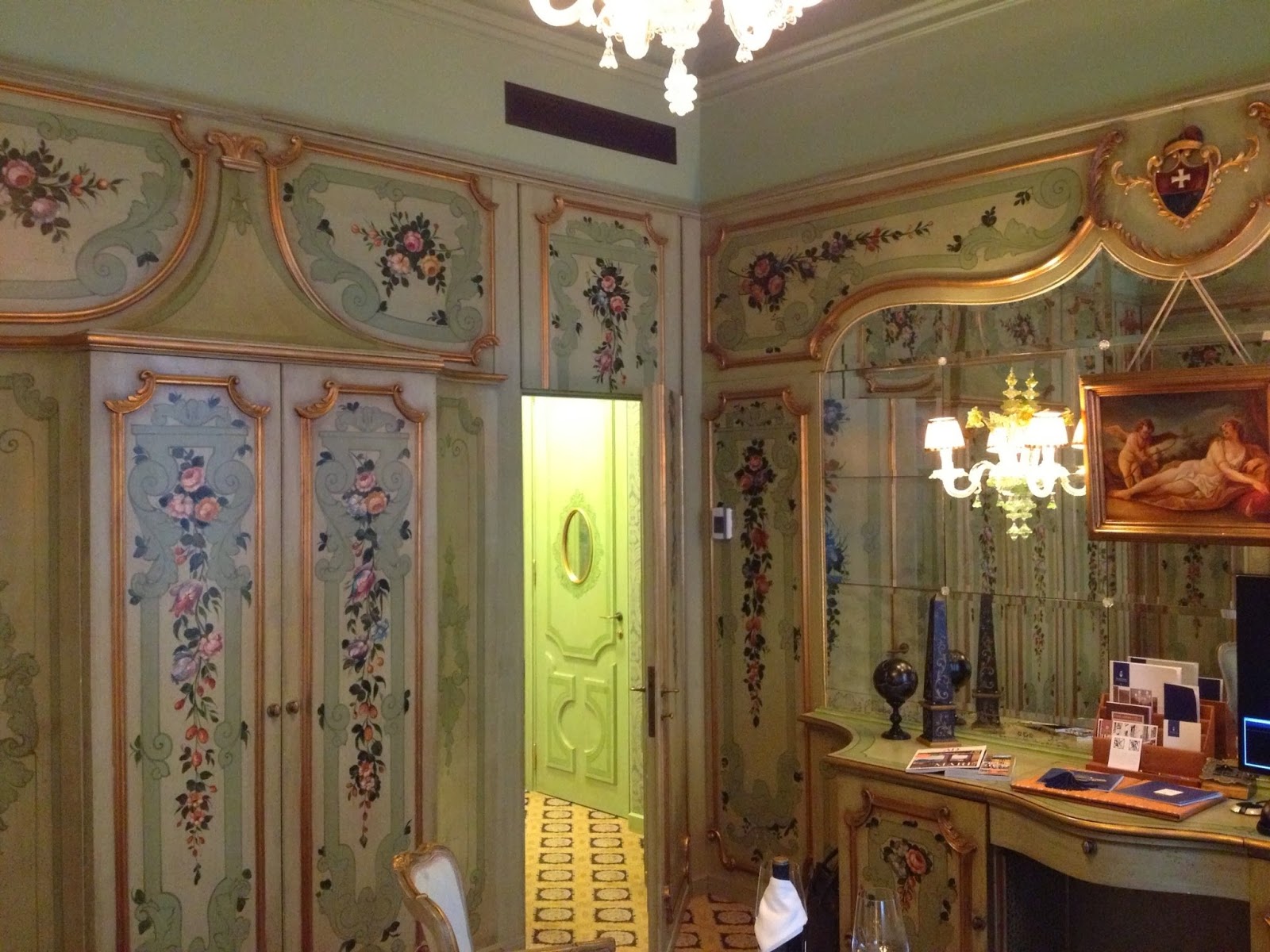 The walls of Venice and Rome – some palatial, some decrepit, all colorful (no dearth there) – have rendered me dissatisfied with our own plain background – whites from gray to cream – and, occasionally, I've wondered what it might be like to live with walls upon which nothing is hung. Risible, I know, such an idea and, certainly, arguing that thirteen 17th-century framed engravings of Rome, a framed 1940s wallpaper mural, a multi-framed copy of a map of Paris, an 8'x4' abstract on metal, and a Gustavian mirror might be stored, would be nigh impossible to justify.  Also, a wall of fuchsia linen in the living room is not so much a pop as a thump of color and it takes a lot of living up to (as does the orange linen in the dining room). But on a cold winter's night, coming home to a jubilance of color is bliss. 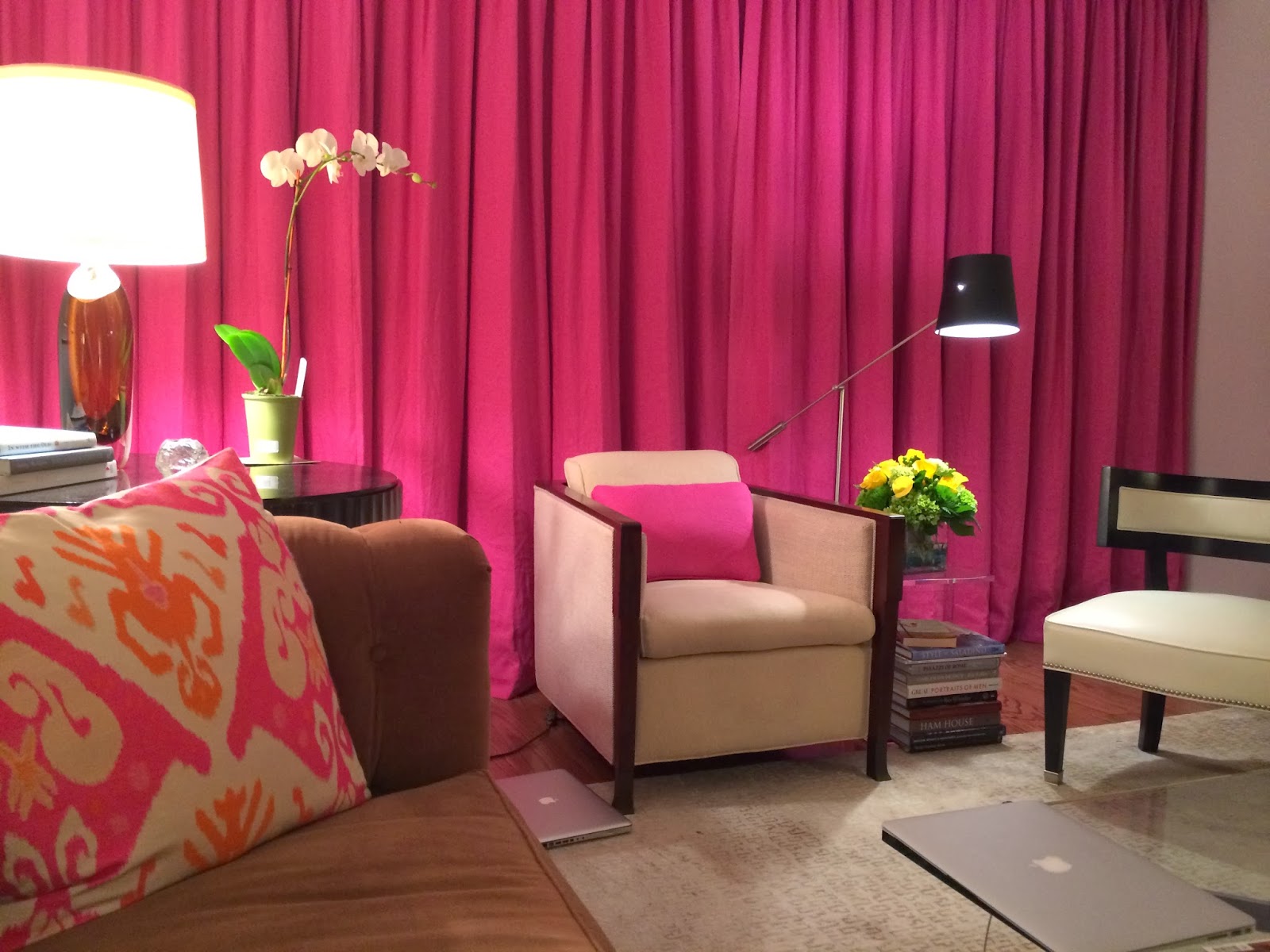 There are two solutions, as far as I can see, to balance the room: de-cream the furniture by introducing a judicious amount of subtle pattern to two chairs, (one of which is visible above); and treat the walls to lotsa shine. One of the more interesting developments of late is an alluring variation on the plain wall – high-gloss lacquer. Mirrored walls are too problematical (of which more in another post) yet reflections in lacquered walls seems to me to be both fascinating and enchanting – enough almost to deny the hanging of any artwork. I see much discussion – mediation, even – in my future. 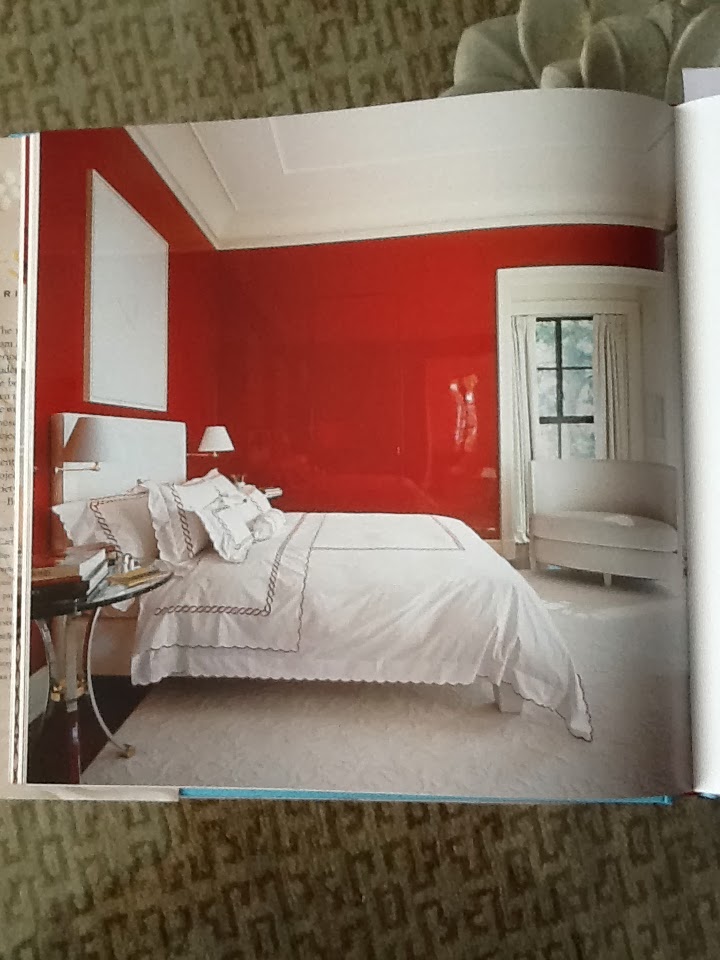 So, the title. A Dearth in Venice refers to the feeling the Celt and I had as we left the hotel – something had been lacking. That morning, early, had been acqua alta which, combined with a strong wind from the south, had flooded parts of the city including the stretch of the Grand Canal where our hotel stood. Even the novelty of that didn't lessen the conviction – and this is a first for us – that the hotel, five-star, though luxurious, was not somewhere we care to stay again. To be sure, the rooms were beautiful, the bathrooms spaciously functional, the public spaces handsome (if mildly implausible), and the staff from the back office, reception, the bar to the restaurant, attentive.

Not a dearth of service, thus, not even an unwillingness to oblige in any way, but an oddly disconnected demeanor. As if we were just passing through their world – which indeed, we were. Perhaps it was a degree of formality to which we are unaccustomed, but which their jet-set guests expect. In fact, they were aloof, as if their attention was elsewhere. Perhaps I'm being ungenerous – it was after all the time of year when everyone wishes to be with family, a time of year perhaps when guests are few, hours long, and the journey back across the lagoon tiresome. Nevertheless, like the acqua alta, we passed through; but unlike the water, we shall not return. 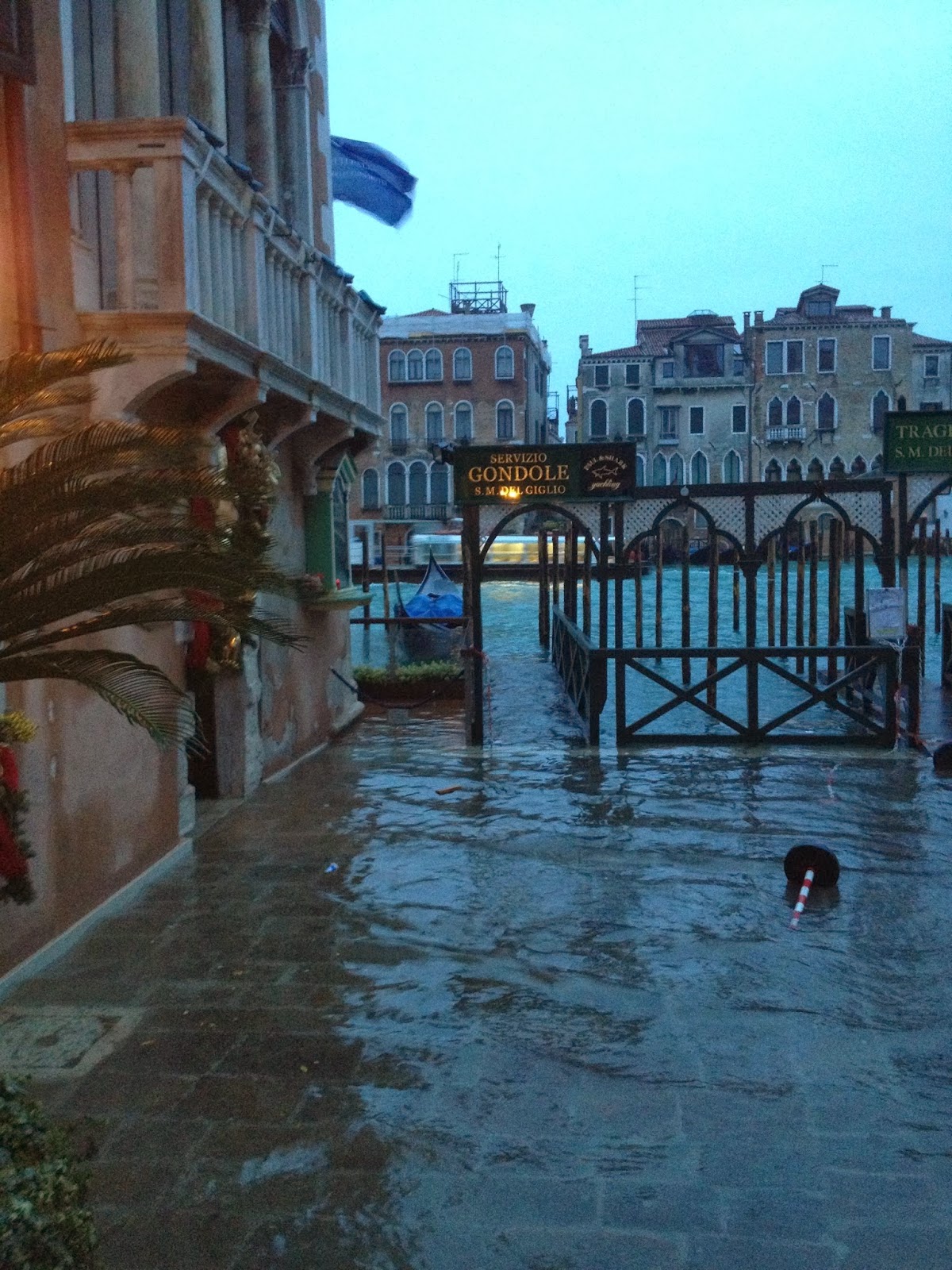 
All photos by the Celt and me, except for the fourth which is by Erik Kwalsvik and from Fortuny Interiors by Brian D Coleman. A feast for the eyes.

The photograph the red lacquered room is from Luminous Interiors by Brian J McCarthy. An excellent book illustrating the work of a decorator at his mature best. I cannot recommend it too highly.
Posted by Blue at 8:25 AM 4 comments: