His car was a Buick

"When I was a student at Temple University, I had the privilege of meeting Henry through a mutual friend. I was a starving student at the time and lived in a tiny apartment around the corner on Locust St. Henry befriended me and I became one of his dog walkers; a job that he paid me extravagantly for. I also got to attend a few of his private parties and met the likes of Douglas Cooper, Billie, Bill Blass and other celebrities of the day. I knew Henry was extremely rich but he never acted snobbish or condescending to me or any other individuals, grand or humble, who made it through the doors of Little Monticello. One little thing about Henry that I always loved was that, despite his great wealth, his car (at least when I was living in Philadelphia) was a Buick. I happened to be Googling Rittenhouse Square the other day (a trip down memory lane) and saw pictures of the house; shutters gone and looking derelict. What a sad condition for a home that knew so much love and laughter. Henry would scream if he saw the condition those front steps are in!" 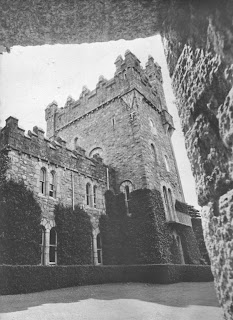 Occasionally, and gratifyingly, I receive comments on posts written a while ago - such was the case a few days ago when I found this personal reminiscence of Henry McIlhenny on a post from November 2010. Coincidentally, more or less, in one of those rare moments when focus didn't cause peripheral blindness, I had found pictures of Mr McIlhenny's Glenveagh Castle in County Donegal when I was in the library looking for something else. 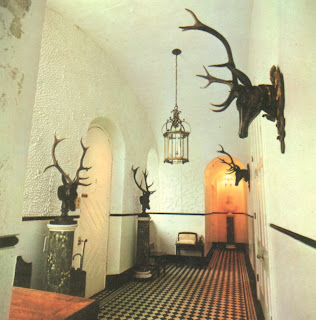 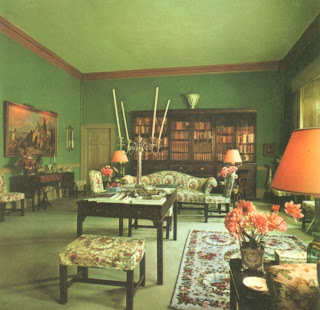 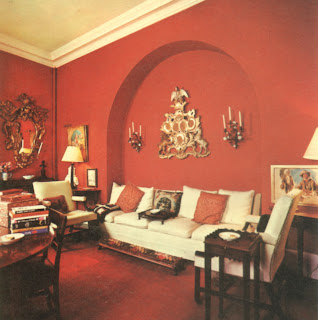 It is these personal reminiscences that round out an image I've formed about the men I've written about over the last two years - circles of friends, acquaintances, allies and agents - kin, after a fashion, in a world accepting of them as decorators but not accepting of their private lives. Reminiscences, tributes even, that so far, except in the case of one man, have been positive and affectionate - such as this one from Anonymous and another a while ago about Geoffrey Bennison donning a .... but that's a story for another day. 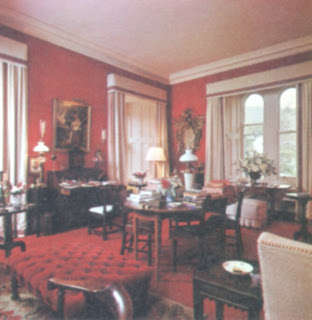 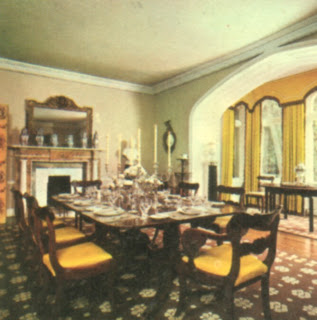 A short essay, I'm afraid and one that should, had circumstances not caused a loss of focus, been posted last week. 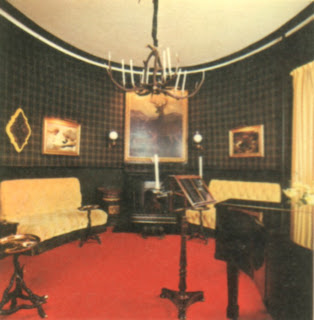 Photographs by Brian Morris from A House in the Country: The Second Home from Cottages to Castles by Mary Gilliatt, Hutchinson & Co Ltd, 1973 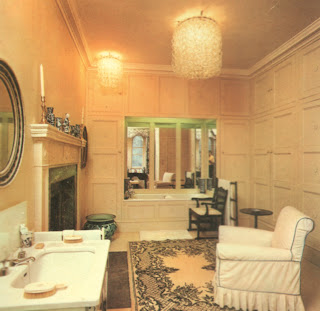 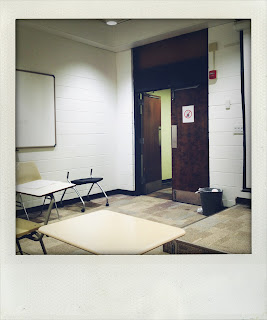 The elevator had just given a hearty shudder when the young man next to me said "I've seen this thing nearly kill two people," and, miming shoulder-butting and pulling apart the elevator doors, he continued "they were like 'Aaargh!" "Eeuw," said one of the objects of his attention and, applying an emoticon horror face, she said "this elevator is, like, sooo scary!" By the time the doors opened everyone involved seemed satisfied with the interaction and went their separate ways to classrooms where, one assumes, communication between student and professor is a little more fluent than what I'd just heard.

Its interesting watching how this generation makes itself understood to its peers, for those members of it with whom I interact in the classroom don't talk to me this way. Oh, on occasion I get "’sup, professor?" which I take at face value and frequently reply "’sup, student?"- which usually brings a smile, if a wry one. In the hallways and in the elevator I sometimes have the idea that these young people have begun to act like silent-movie stars - mugging for the camera with words replaced by gestures and poses. It seems to me the more inarticulate they are the more expressive their body language - though, perhaps, now I think about it, not so much resembling silent-movie stars, more modern-day TV actors.

I wondered once if it were fashionable to be inarticulate and whilst I think that is might be so, peer pressure, or rather pack behavior plays a role. This combination of gesture, facial expression and pose is a linguistic short form to which I've become accustomed and which I observe every day. I remember one teenager I overheard in an airport recently who was irritatingly unable to put two words together without an intrusive "like" or a gesture or a pose to fill in the missing words. I, like, was, like ... really, like... I mean... Her three uniformly clad and coifed companions were equally incomprehensible but it did not seem to matter for they all were having a great time. While I, like, in my, like, ungenerous way, wanted to .... well, I won't, like, go there.

"Is that a Brooks Brothers’ blazer?" asked a student last night before class began and on hearing it was, said he "that's, like, fratty as fuck!" Not so much thrown as intrigued, I asked "what as what?" and his female companion, perhaps in an effort to defuse what she thought might become a difficult moment, informed me in very friendly way that FAF was a compliment. Grateful as I was, and remain, for learning something new and for being made to laugh out loud, I thanked them both.

Despite the criticism it gets for its inability to put down a cellphone; its seemingly universal desire to filter life through earphones; its casual relations with deadlines; its supposed narcissism and public inarticulacy, I must say I have found my experience with Generation Me to be unalloyed pleasure. What I for my part find hard to articulate is how much I will miss my interaction with those bouncing-off-the-wall-with-enthusiasm, bright-eyed-and-bushy-tailed, uniformly entertaining and, in my experience, hard-working students when I stop teaching at the end of next week.

"When I found this romantic house next to a small river, it was almost in ruins. Four years have succeeded in making it comfortable, but it hardly looks new. That suits me, for I have a good deal of provincial Louis XVI furniture inherited from my family. And I spend lots of time in the antique shops and flea-markets of London and Paris. I live in what seems to my interior designer friends a rather Dickensian 'Old Curiosity Shop.'

"The walls are covered in old damask or in East Indian printed materials from the eighteenth century. I also have a large tapestry made from a design by Rubens. A light touch is added by fuchsia and geraniums in blue and white china pots. There are books everywhere and pictures too: prints along the staircase and in the gallery, Chinese paintings and bamboo furniture in the bathroom. 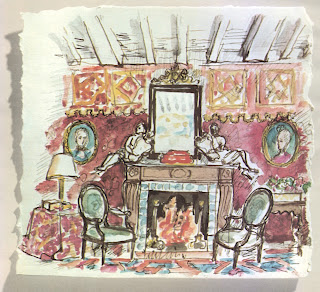 The Drawing Room - Baroque marble statues on a wooden Louis XVI mantel; the golden damask hangings are from a Rothschild house.
"There is always a big fire in the living room to keep out the dampness. These are some of the ingredients which give my house a kind of charm, since I have made no particular effort to use a consistent color scheme or any careful interior arrangement. The house is twenty-five miles east of Paris, and it is where I write all my books. It is always filled with flowers from my garden." 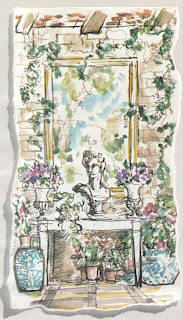 The Garden Room - an Empire bust, porcelain vases and a mirror to reflect the park outside. 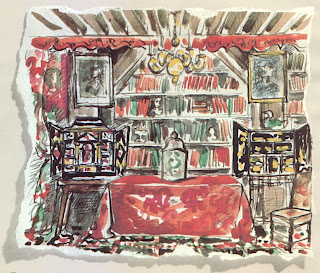 The Library - once part of the old barn, this room is filled with my books and many old prints. There are Japanese cabinets, a Victorian church carpet and a Dutch brass chandelier. 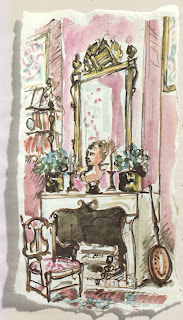 My Bedroom - the Louis XVI fireplace, with a terra-cotta bust on the mantel and the brass bed warmer leaning against it, is my favourite part of the room.
Not necessarily being of an enquiring mind, Philippe Julian's name didn't strike a chord for me. I'd seen the pages before on my hikes through piles of old magazines: pages appearing to be from an album of small paintings torn from a sketchbook and surrounded by the kind of handwritten text that, irritatingly, brought to mind those occasions in my youth when, because I was thought to be "artistic", it was assumed I could and would write the gothic black letter thought to be special enough for the dedication of the moment. Those days, a mumbled apology for not being able to oblige was all I could muster but, looking back, my problem was with the assumption more than the request - much like that made two decades ago by a client who, because I'm queer, thought I could and would sew her net curtains for her.

What I have just written might, if one made such an assumption, indicate a long memory for affront but I lean towards the notion that such memories are steps in the creation of personal morality; and if the memories, on occasion, float to the surface then there's something still to learn. It could also mean, of course, I need to step up the dosage of what the Celt calls my "niceness" pills.

So, Philippe Julian – the man asked to ornament the first Château Mouton Rothschild "artist" label, illustrator of Angus Wilson's For Whom the Cloche Tolls, author of The Snob-Spotter's Guide and, amongst many a celebration of the fin-de-siècle, a suitably overwrought biographical essay about Adolph de Meyer – is not, despite the fact he began as such, the subject of my post. 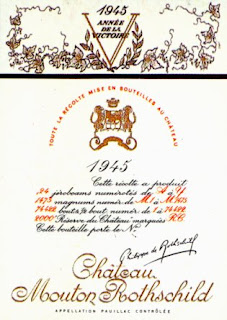 On Friday I had lunch - my glass of wine bringing to mind a long-remembered phrase, not so much a pretentious little wine, more a mendacious little paint-stripper - with a man who had written to me about my essay about Michael Greer - a man he'd shaken hands with at the age of eleven, and who, like Greer is a native of Monroe, Georgia. Greer, known in his home town as Joe rather than Michael, famous in his time as one of America's grandest decorators, and whose murder provided friends with opportunities to show just how easy it is to speak ill of the dead, was, after a private cremation service, as one might assume, buried with his parents - but not quite as one might expect - between his parents' graves in an unmarked place.

So, on this day celebrating one assumption, I wonder if shame - that emotion from which we can learn so much, and one which I believe (as my long memory suggests) we should never cause another to feel - is the reason why there is no headstone for Michael Greer.

Image of Château Mouton Rothschild from here.
Posted by Blue at 10:27 AM 12 comments: