Naples, eruptions, chittlins and the tears of Christ

Its not easy, prone in the dentist's chair, mouth agape and filled with fingers, to tell the nurse twice describing how her aunt prepares chittlins, to STFU, though I tried, believe me. Squeamish about food I may well be - at least according to the Celt - and surprising perhaps for one who, as a child, relished uncooked tripe laden with salt and malt vinegar, but couldn't remain in the same room as a bowl of tripe and onions cooked in milk, my grandfather's favorite dinner, which to me looked nothing more than a bowl of ... well, perhaps I'd better leave you without that image. Still shining bright in my mind's eye, though. 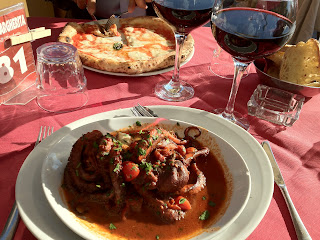 I hoped they were olives, not eyes, in the Polipo alla Luciana the Celt ordered and consumed with gusto, but olives or not, so repelled was I, despite sitting in the sun on a terrace overlooking the bay, I couldn't finish my pizza Margherita and drank my wine as if it were Pepto Bismol. Antacid it was not, and dyspeptic eruptions occurred along the sea-side of the Via Partenope towards our hotel opposite the Castel dell'Ovo. 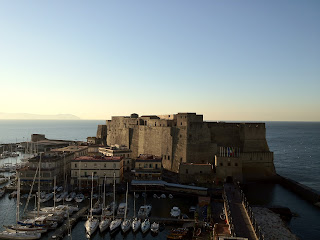 On St. Stephen's day, despite horror story after horror story about crime and dirt in Naples, we took the train from Rome to Naples - a shortish, pleasantly sun-lit journey with plenty of time to take in all the beauty rushing past the windows. We talked with other tourists sitting near - an American couple and their daughter, the latter playing games on her phone, not once looking out at the views. 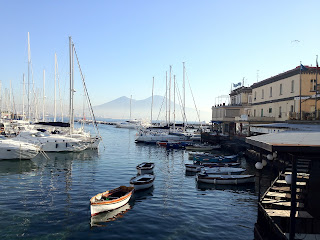 Across the bay, Vesuvius dominates more than the land it once destroyed, I think, for surely it must overshadow the minds of the people who live near it or on it - and people do live on it. Houses, farms and vineyards climb the slopes, unbelievably to me, given what there is to see at Herculaneum. 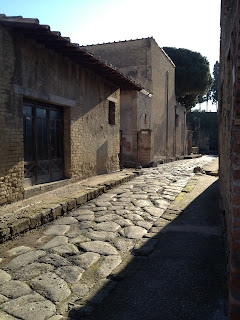 At Herculaneum, in the early morning light, it is possible when standing quietly in certain parts of the town, to imagine the life once lived there and that the people are not yet awake. To walk down a steeply-raked tunnel to the old shoreline and then to look back and see the cliff down and through which one has walked – and know that it is the layer after layer of volcanic mud and ash, nearly 60 feet in all, that buried not only Herculaneum but the memory of it too – is shocking. 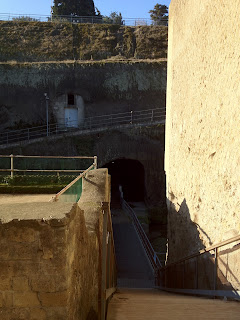 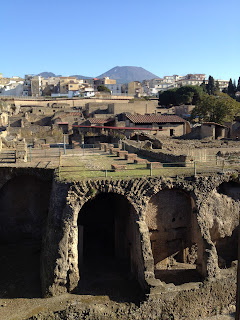 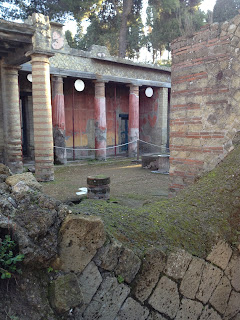 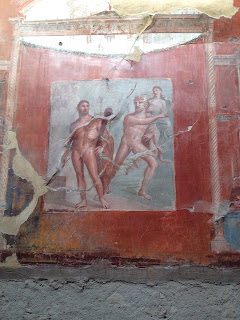 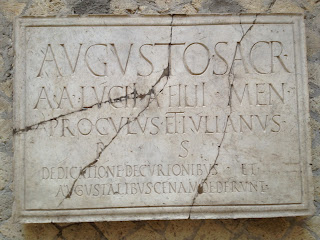 Pompeii, much bigger, is a sadder place - not so much because of the ancient tragedy, inured as we are to that by television dramatizations, but more for the fact that so much appears to be falling down, that so many streets are barricaded off for restoration, and that one of the most egregious infestations afflicting Naples – graffiti – mars even the faded remnants of decoration in those Pompeian houses one can still enter. To know that in 1979, Alberto loved his Adriana, is not the edifying experience for which I crossed the Atlantic. Yet for all its sadness, and the nightmarish feeling of endlessly walking through low ruined walls beyond which are more of the same, I wish we'd had more time and I more energy. 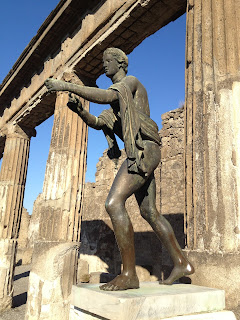 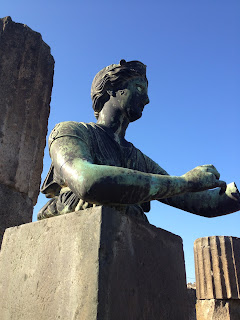 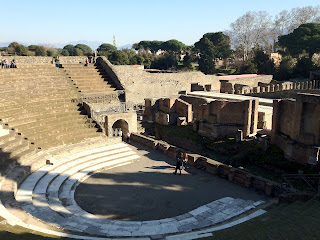 I did not fall in love with Naples, despite its wonderful archaeological museum, its charming two-and-a-half-hour-long siesta, and staying at one of the best hotels in town - frankly, I found the town awash in graffiti and dog-dirt even in the more fashionable parts, with swarms of small cars and scooters clogging every street and alley, laundry hanging over every balcony in sight - not as romantic as one might think - and the food not nearly as interesting as one might wish. I stuck to pizza, fish and rough wine and was perfectly happy.

A wine still produced on the slopes of Vesuvius, Lacryma Christi, and recommended by a fellow blogger, I never knowingly drank in Naples - I had forgotten about it. We've bought it since and, in my opinion, it needs a good steak to to go with it - a steak which, by the way, in my own increasingly queer way, I prefer cremated rather than rare.

It also occurs to me, on a more cheerful note, that if that thing ever goes off again - Vesuvius, that is - there'll be more than one tear of Christ needed for the scale of that tragedy.

The name, Lacryma Christi, "Tear of Christ", comes from a old myth, or marketing ploy, that Christ, lamenting over Lucifer's fall, cried his tears onto the slopes of Vesuvius and gave divine impetus to the vines that grew there.
Posted by Blue at 10:54 PM 22 comments: 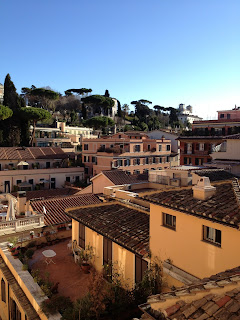 "Come and look," I said to the Celt as he was adjusting his bow tie. I had opened the window, chill notwithstanding, of the little dressing room earlier in the day for fresh air, whilst waiting for the inevitable rearrangement of my pocket square, the latest of the Celt's attempts to bring me, sartorially speaking, into the 21st-century - wearing one always makes me feel visible - I poked my head out to see what there was. What met my eyes was an enticing view over roofs and terraces towards the church, the Trinità dei Monti, that moors the Spanish Steps to the side of the Pincian hill.

We walked early that morning along the banks of the Tiber past the Ponte Rotto, a single-spanned midstream remnant of Rome's oldest stone bridge, up the steep slope of the Aventine hill towards the Basilica di Santa Sabina and the Giardino degli Aranci from whose belvedere one of the most beautiful panoramas of the city is to be seen. 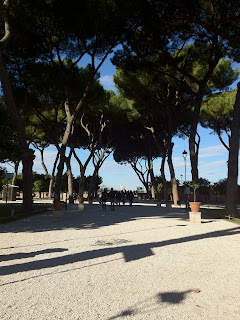 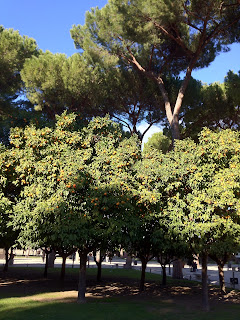 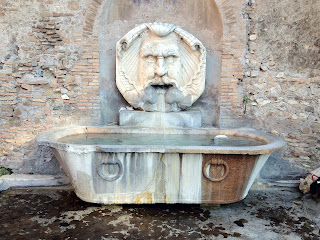 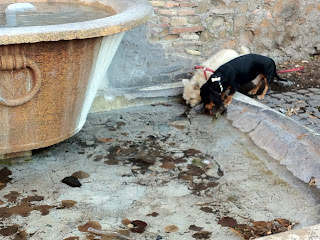 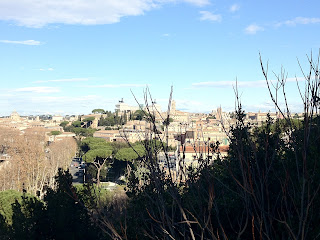 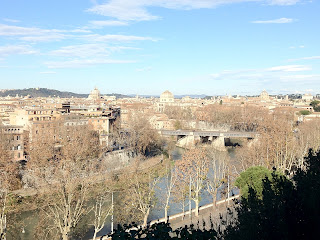 The dressing room, as I call it, was merely an extension of the hall flanked on one side by closets - a space for suitcases on stands, convenient to the clothes hanging in the closets and large enough for the two of us to get in each other's way. In HGTV-speak, I should call that little space a "dressing area" much as a hall in many a fatuous program is called an "entry area," a living room a "living area" or, as I heard only yesterday, a tiny rectangle described as "formal living area," a rudimentary bathroom called a "bathroom area," a family room as a "family room area," and scraps of concrete and grass below the back door as a "patio area" and "garden area."

I'm not sure what happened with the kinds of programs where potential buyers ostensibly are looking at a formulaic three properties - one of which has, of course, already been bought - but it appears they are reading, in squeaky voice-over, a script from which "room" has been scoured and replaced by "area." I know words go in and out of fashion but what did this good old-fashioned word "room" do? Did it offend or is it that it does not sound grand enough?
So, in our tiny dressing area, the pocket-square demanded patience from both of us. If I had a preference, and seemingly fashion trumps all such whims, it would be for a regular handkerchief starched, pressed and placed square in the pocket and left alone for the rest of the day - if I wore one at all. Not so with the pocket-square which, for all its listless dishabille, seems to need an inordinate amount of attention and, maybe more importantly, is inhospitable toward reading glasses and all the other things men stow in a breast pocket. 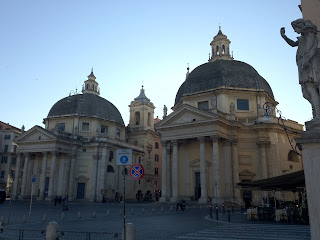 Our hotel, steps away from the Piazza del Popolo, with a garden that climbed in terraces over the feet of the Pincio, and a bar I remembered seeing years ago in Architectural Digest, was once, allegedly, the favorite of the Russian aristocracy. There is nowadays little trace of what must have been the magnificence of that time, except perhaps in the architecture, now unrelentingly white. Yet the hotel has all the luxury of contemporary minimalism without the feeling of diminishment that much modern design and decoration can bring to old interiors.
Perhaps it's a peculiarly Italian sensibility, this skill in giving simplicity the air, if not the fact, of well-tailored luxury. Not so, I felt, about one hotel in London - Europe's first grand hotel it is claimed -redecorated with a "signature look" by one of London's finest, where we took tea with an Atlanta friend and her children, that had suffered the same application of contemporary drabs and whites in a not-quite-minimalist obliteration of its grand past that compared, albeit cursorily, to our hotel in Rome, appeared heavy-handed if not downright oppressive. Perhaps such a comparison is wrong, for the difference is not only one of wit - a quality the Italians have in spades when it comes to aesthetics - but in weather. London's often lowering skies and grey light can suck the life out of white, whereas Rome's frequently blue skies and golden light can make even the drabbest white sparkle with vitality.
My favorite white in the whole of Rome was that of the linen sheets at the hotel - neither the first nor the last linen sheets we'd sleep between while in Italy - heavy, thick and beautifully ironed. Cool, soft to the touch, they'd appear each day, a miracle of crisp uncreased cloth draping shy of the floor and as inviting as a long drink of cold, fresh water in the heat of summer.
Posted by Blue at 12:02 AM 16 comments: