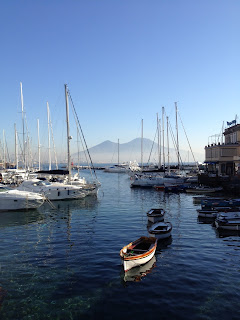 Wishing us all a calm sea, a prosperous voyage and an absence of unexpected eruptions for the coming year. Happy New Year!
Posted by Blue at 7:00 PM 8 comments: 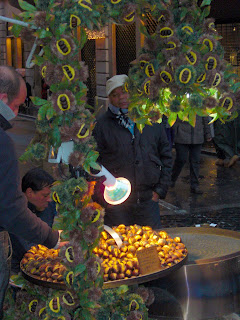 Chestnuts roasting by an open fire ..... Happy Christmas
Posted by Blue at 12:05 AM 6 comments: 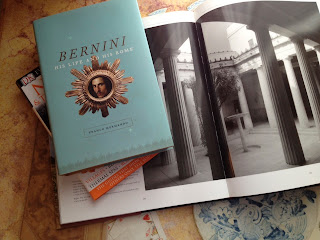 The semester is over, the last interior design students are graduating, our Italian classes are finished - as are all our holiday celebrations, except for, that is, friends coming in for drinks tonight; lunch at Bergdorf's on Saturday and dinner with old friends in New Jersey later that evening; afternoon tea next Monday with a neighbor and her children at A Grand Hotel in London and dinner the same day with an old friend at A Trendy Restaurant; dinner in Rome on the 25th with neighbors from down the street and, on our return from Naples, a visit with the Celt's family in London. My goddaughter, the Celt's ten-year-old niece, has decided that the best possible treat for her uncles is for her to take them to the Victoria and Albert Museum, go ice-skating, view the city from the London Eye and eat Italian food in Soho.

You'd think, reading the first paragraph, that the Celt and I plan nothing that doesn't involve eating - and to a degree you'd be right. Food outside and frequently in the house often means friends are involved and seemingly being on vacation (going on holiday as we used to say it) isn't any different. Everything is planned and booked - flights, a train journey, hotels, restaurants, tickets to Villas Kerylos and Ephrussi-Rothschild, even a car to pick us up from the airport. I don't mind driving around Nice, Saint-Jean-Cap-Ferrat or Monaco but I refuse to deal with Rome's traffic from behind the wheel of my own automobile.

"You're staring again," said the Celt. "I am," I said, "but it's all right - I'm too old to be visible." If I was staring it was inadvertent because actually I was listening to a young man, sitting at the counter of a New York coffee shop where coffee beans flew through tubes across the ceiling down to machines and baristas supplying inexplicably baroque concoctions of coffee, who was talking, futilely, it seemed to me, to his companion who was busy watching another man at the other end of the counter who, in his turn was watching .... well, you get the idea. But what had caught my ear was the phrase "the rise of the novel" - not a phrase one expects to hear early on a Saturday morning anywhere.

Used as I am to being met with dismay and bewilderment when I suggest to students that they might pick up a book and read, I settled in, cup in hand, eyes safely averted in the direction of the famous-but-whose-name-escapes-me person walking his dog, for what I hoped was going to be an interesting few minutes. Well, it wasn't, but the speaker's voice having that rising inflection that makes all sentences sound like a question, kept me eavesdropping a few minutes longer until he really grabbed my attention by stating very dramatically "I. Nearly. Died."At which point the Celt, fixing me with a don't-dare-argue stare, said "We. Need. To leave."

We meandered on through streets virtually empty - so unexpected for Manhattan - until we climbed the steps to the High Line and realized it was no wonder the streets were empty, everyone was here and they were walking in clots very, very slowly along the pathway taking in all the wonders than a camera phone can bring.

Later, we sat for a while, that weekend after Thanksgiving, in the sunshine on a stone bench in Washington Square, talking about our plans for our winter vacation and how near our departure was; about how neither of us wanted to shop in the city, except perhaps, for curiosity's sake, a visit to the new Uniqlo on Fifth Avenue (for me, because of its crowds and noise, hell on earth); about where we would eat lunch; about how we hadn't any real interest in visiting museums ... just talking.

I mentioned an article I'd read in the Design and Decorating section of the Wall Street Journal, entitled 10 Odd, Yet Essential Elements of Style and it seemed to me nothing more than trite advice about a formula for decorating a house. Which of course it is, but after I'd gone through the list, the Celt asked me if I'd checked around our place recently to see how many of these odd yet essential elements we actually owned. "Nonsense", I said, poo-pooing the very idea. "When we're home again take a look," he said. 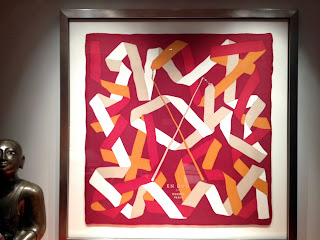 And here, dear reader, is what I observed. Ms Needleman's first essential is A little animal ... people like cute things and animals are cute - it is so nice to have a small creature in figurine form in your house. A funny stuffed animal on a nicely made bed, a white porcelain monkey ... Well, I'm not sure if a Meiji bronze crab counts, but if it does, then I guess check! But, I must say, neither of us likes cute (unless, that is, it sports six-pack abs).

Next up: Jollifiers ... sentimental things that spread a little joy every time you cast your eye upon them. Goodness, we have not just one, but one each. For the Celt, a framed Hermès scarf and for me a Delft tulpenpot, a souvenir of times in Amsterdam.

Third on Ms Needleman's list are Mollifiers, which she defines as ... the stuff that you allow into your home because awful as it may be, it makes someone else happy. We appear to have none of these. Of course, this may have something to do with the fact that almost all our relatives live on the other side of the Atlantic Ocean so there's little need to appease or to be prepared for the unexpected visit.

While an odd chair is useful, it is not used primarily for sitting. It is desirable primarily for its amusing demeanor, making it more like a piece of sculpture in the shape of a chair... We certainly have one of these, in the form of a flea-market 19th century French Modern chair we had recovered in a Timney Fowler silk we bought thirty years ago. We had never found a use for the fabric, with its sketchy drawings of the Three Graces, but eventually it revealed itself as the perfect complement for this dumpy little chair. And the fact that we bought this fabric on a whim without knowing quite how we were going to use it brings to mind another of Ms Needleman's pieces of advice: when love strikes, buy it. You can figure out what to do with it later. 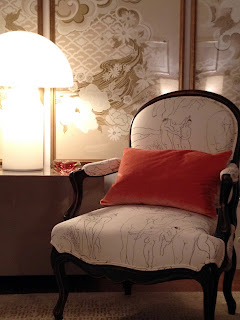 An inordinate number of geometrically-cut Murano and sommerso glass bowls that send off all sorts of scintillations probably come under the heading of shiny object, and are certainly, as Ms Needleman describes .... completely useless items whose only purpose is to sit around looking attractive....


Ethnic textiles are pretty scarce chez Blue, with the notable exception of a pair of pillows made from vintage Japanese kimono silk. Bought on Etsy on one of the numerous whims to which the Celt is subject. Thank the lord for return policies!

Not too much brown furniture ... too many brown pieces in a room is the surest way to suck the life of it. Ever seen a room and wondered why it looked like a hotel lobby? Brown! Not too much, just a smidgen, in each of our rooms - a dining table, a side table in the living room and bedside tables in the bedroom.

Decorative mirrors ... a big mirror over a fireplace or in a dining room can toss daylight around the room and multiply the light of a chandelier or the glimmer of candles set in its path. That, and it is a big beautiful object that can create the kind of drama that grounds a room. A highly functional decorative object if ever there was one. Yup, got two of those! One a large Venetian that indeed tosses light dramatically around the guest bathroom; the other a gilded, apparently Gustavian treasure that, amazingly, is in fact a gem from IKEA's all-too-short-lived series of reproductions of Swedish classics. We often ask first-time guests who admire it to guess its true provenance. No-one ever does.

Lacking a fireplace, as we do, might be considered a disadvantage for tenet number nine: log baskets. But as Ms Needleman points out, even if you have no use for split wood, you might still like the rugged texture of a big woven basket in your living room or front hall. It gives you something a little rough and adds a sense of depth to both sleek-modern and refined, antique-filled interiors. And in fact, a rather large log basket does duty in our household as a laundry basket.

The last essential is, apparently, some patina, of which our home has plenty. Indeed, the occupants alone provide a fair measure!

I started skeptically believing my own exquisite taste to be immune to the newspaper article's ten decorating clichés du jour. So imagine my surprise to discover we've committed completed nine out of the ten! Well, my dear, I. Nearly. Died.
Posted by Blue at 9:42 PM 19 comments: