Those were the days, my friends

we thought they'd never end ...
It occurred to me over the weekend that all of the men I've written about in the last couple of weeks would, had they lived, have been in their seventies and eighties. Give or take a decade or two this was my generation.
Bob Patino and his then business partner, Vincente Wolf, designed the beautifully stylish rooms below. Uncluttered, and without the austerity of high-minimalism, sensual, urbane, and welcoming - all adjectives that could be applied to the mature style of Mr Wolf as seen today, and it is easy to perceive the roots of that maturity in his association with Mr Patino.
Pared-down, a phrase much used in the 1980s to describe this kind of interior, was a means for some younger decorators to differentiate themselves from the more traditional of their colleagues, and to indicate that the steep road to the moral high ground had been taken. Not quite the stripped-to-the-bone minimalism of John Pawson - some ground was too high - rather the gentle seepage of a neutral palette, an eschewing of frills and furbelows, a straightening of line, a shy placement of polished metal, the renunciation of all tabletop lighting, and a certain relief that the barbarians were no longer at the gate. 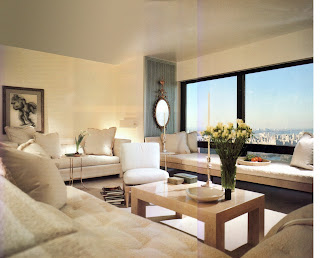 ... we'd sing and dance forever and a day
We'd live the life we choose
We'd fight and never lose
For we were young and sure to have our way. 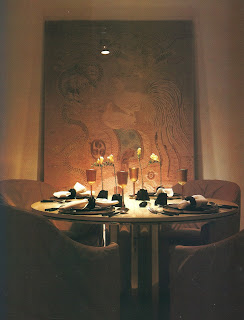 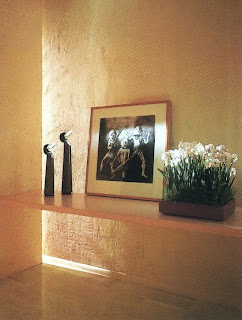 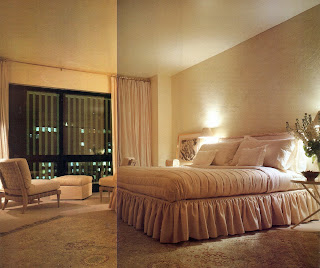 Photos by Peter Vitale, from Architectural Digest, December 1985.
Quote from Those Were The Days. For credits click here.
Posted by Blue at 9:56 PM