She signed, in a very personable manner, with a "sincerely for House Beautiful" and addressed me as "Dear" but for some reason Julia Crislip was under the impression that my name was Variable Name. I really do wonder how could she have got that wrong for, seemingly, she knows me well – "as a former subscriber, you know better than anyone the value of House Beautiful ...  and how it truly provides indispensable tips and ideas for decorating projects big and small."

Well, Ms Crislip, let's discuss why I am a "former subscriber" and do not intend to become a member of that group you describe as "returning subscribers like yourself." For a while, whilst Stephen Drucker was the editor, I thought House Beautiful began to be mildly interesting and, yes, I had a subscription but what drove me away was not so much the increasing diminution of interest – what I saw as an over-emphasis on props and vignettes – but more the way the subscription was handled – for I found my subscription had been automatically renewed, although I had not asked for that. This was in the days before potential subscribers were informed of this service. When I enquired about the surprising end of subscription date on the magazine label the man in your call center was quite snippy and when I reacted by canceling the subscription he informed me I would not receive the balance for that year. It's not a decision I regret, judging by what I see when I flip through the magazine on the newsstands.

If something so sloppy gets out of the advertising department might it suggest, perhaps, a lack of quality in the bigger picture? 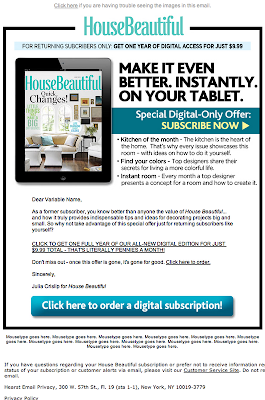 Sincerely, but with tongue firmly in cheek, and in the knowledge that we all make mistakes,

Blue for The Blue Remembered Hills
Posted by Blue at 8:41 AM 14 comments:

For the rain it raineth every day

"Well," I said, "if you are going to surprise me, first let me get used to the idea. You've known me over thirty years, you know how that goes..." One night recently, just as I settled in bed to read my latest m/m e-mystery/romance, the Celt, not usually given to causing me a sleepless night, remarked "I know you don't like surprises, but..."

He waited two days – almost long enough for me to get used to the idea – before handing me a green wrapped book over dinner, and saying "I'm dying to tell you and I can't wait any longer. Open this." And a surprise it was – a guide book for Vancouver, a city I've long been curious about, a city thronged with cousins whose family name I no longer remember, and where the Celt had decided we would spend five days to celebrate my birthday. 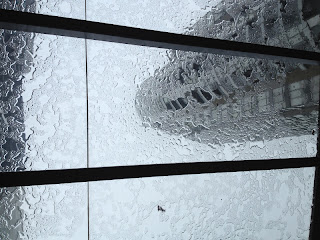 I wouldn't go as far as to quote Wordsworth – "Bliss was it in that dawn to be alive, but to be young was very heaven..." and I'm not sure how many of you would understand if I stated it made me very happy to have five days of unrelievedly grey skies, low temperatures and almost constant, gentle rain – but blissful it was.

It's easy to miss the simple pleasures of life in a maritime climate – the buttoning of a raincoat, the unfurling of an umbrella from which descends a patter of rain, soft as a child's heartbeat, bestowing a sense of well-being unmatched even by the slow seep through the stitches of a boat shoe, the lap of water against moored boats, or the grey veils wrapping the hills and valleys of the horizon. 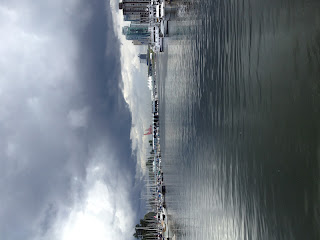 There's water everywhere in Vancouver; the first city other than Rome where I've said I'd like to live when I retire (– oh, wait...) Water, not just in the form of eight months of "liquid sunshine" as our driver gloomily called it, but also in the form of fountains, cascades, rills and pools. Everywhere we looked there were references, realized in stone and tile, to waterfalls, torrents, cataracts, trickles and spates. Set amongst modern buildings – vertiginous cliffs of concrete and glass inundated by outbursts of green – water sounded its melodies.

One of the pleasures of Vancouver is that it is such a walkable city; and walk we did – miles each day, along the waterfront, the harbor, through the streets and the parks. An essential, especially with all that walking, is an afternoon nap – or, if not a nap then a rest flat out with a book. It was during one of those stops that it occurred to me that if where one lived were well-designed, that space need not be large. "I could live here," I said to an unheeding Celt already deep into his nap. 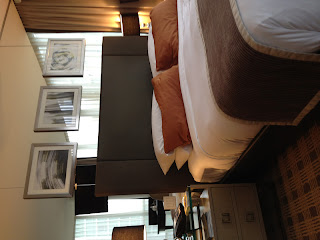 Could we, I wonder, live in the equivalent of a reasonably-sized hotel room – in what essentially is one room with attendant bathroom and storage? It's not that I'm in any rush to find out, but none of us, it seems to me, needs much space. We might aspire to more space than we inhabit but, it occurred to me as I lay there that afternoon, it's the things we own and display that inhabit more square footage than we ourselves do. No epiphany this, just a simple realization in personal terms that if we were less burdened by things we could live in a more efficiently planned space dedicated to physical need rather than to the display of possessions that, essentially, we allow to own us. 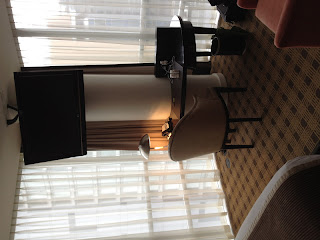 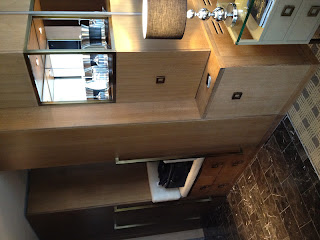 Eventually my musings drove us both to the bar for cocktails before we set out for dinner. It is clear to me that a good Manhattan is rare. A Manhattan is my drink, as the Negroni is the Celt's. They are what we order regularly and I can tell you it's a pretty hit-and-miss affair. In a world of "signature" cocktails and droll experimentation with distillates and tinctures, it is a pleasure to get what you ask for.

Seemingly in Canada no more than three ounces of liquor may grace a glass at any one time. This makes for very small cocktails!
Posted by Blue at 7:53 AM 16 comments: