May I have a blogging room, please?

Arthur E. Smith decorated a house overlooking Long Island Sound for clients of long-standing: previously, he'd worked on Texas and Florida apartments for them and an eighteenth-century seven bedroom cottage from which they upsized to this twenty-five room house. 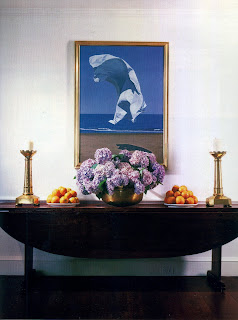 Mr Smith's task, as he put it, was to make a house in which "you can walk yourself ragged" seem not grand. A mighty task given the number of rooms and the size of some of them: a dining room that appears so intimate in the photo below could seat twenty-four, a hall that could hold 125 people dancing (who, one wonders, was the wallflower?) and a room superfluous enough to be designated the telephone room. It seems, this telephone room, a swanky throwback to a time when a butler answered the single telephone in a closet off the hall, that a room in the mid 1980s could be used solely for telephoning. Probably unimaginable to the modern generation, given phone and social networking technology, and even to those of us old enough to have witnessed the Wright brothers fly.
I say, unimaginable, but witness the boom years before the present economic melt-down when builders, architects and realtors dredged up archaic designations for rooms: butler's pantry, keeping room, library, great room, and made fortunes doing so. Did I mention the bonus room? 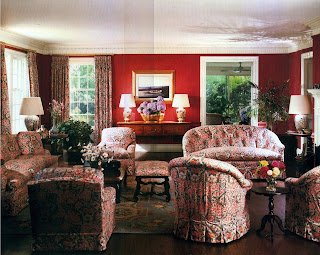 Arthur Smith created rooms, of which there must have been many not published, that were a humane response to the scale of the place and the clients. It could not have been easy to make this house seem intimate, to have the feel of a cottage - though that depends on how cottage is defined. Cottage in the sense of a staff-cottage or a Newport cottage? Clearly the latter, in this instance.
Comparing these rooms to the sober interior Arthur Smith designed for Andrew Crispo, and to those for another client in 1977, you will see how versatile a decorator Mr Smith was and what a pity it is for interior decoration that, like so many of his generation, this Vidalia, Georgia native, protegé and business partner of Billy Baldwin was lost to the plague. Mr Crispo, described as Mr Smith's companion in an obituary survived him by a number of years, enjoying a certain notoriety. 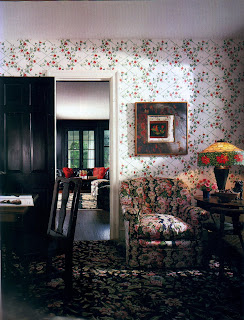 Photos by Peter Vitale from an article written by Louise Bernikow, published in Architectural Digest, February 1987. 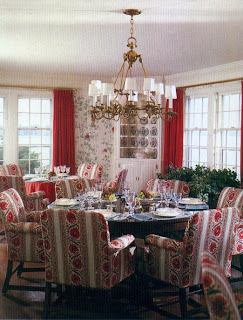 P.S. I wonder if the bowls of oranges in the first photo was one an early instance of fruit being uses as decoration? I remember bowls of green apples being ubiquitous for a number of years.
Oh, and talking of the first photo, aren't those candlesticks glorious?
Posted by Blue at 11:01 AM