One of the interesting things about my research in the last few weeks is that not only have I been able to reacquaint myself with old, sometimes forgotten favourites, but I have also been able to reassess old prejudices.
I must tell you, therefore, that I never got Michael Taylor - that is, until I saw the photos below. They are not a complete record of an interior, as far as I can tell, for when I found them I also saw that pages had been neatly cut from the bound copies of the magazine I was researching. However, the remnant was large enough for me to feel again the frisson I felt on first seeing them twenty-five or more years ago. I wish I had more photos to explain the whole interior but at least there are photos of the living room - the room that impressed the heck out of me all those years ago. 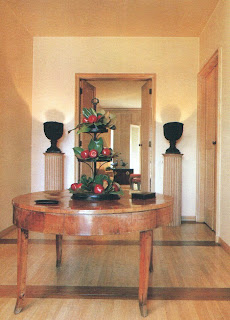 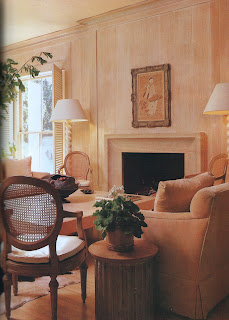 These photos come from an article describing the designer's debut, over thirty years before the article was written, as an augury of what became the California Style. When I first saw these rooms, as I say nearly thirty years ago, I felt this was one of the most sophisticated interiors I had ever seen and I also distinctly remember being almost disappointed that it was by Michael Taylor - I did not like the pale bloat, as I considered it, of his later style. Well, of course not, this was thirty years before he got to that and the invention of the ball-shaped throw pillow that galvanized every decorator from coast to coast.
In this golden, monochromatic interior, and it was probably one of the first monochromatic color schemes I actually liked, with its careful placement of what appear to be such ordinary elements, Taylor's hands created magic. I say quite ordinary, but perhaps fifty years ago, what today appears to be so run-of-the-mill, was extraordinary. And in a way, extraordinary they were, for three of those items came from the estate of Frances Elkins: the couch, the armoire and the floor lamp - provenance giving importance beyond their simple beauty. 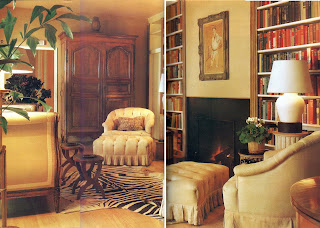 Am I still at odds with Michael Taylor's mature style? I think I am. I understand his popularity, then and now, and in no way do I want to demean his achievement or his influence - and influential he was - but I can honestly say that when it comes to his mature style, I just don't get it. I will leave it at that, with all the implications of what could be a lack in me. 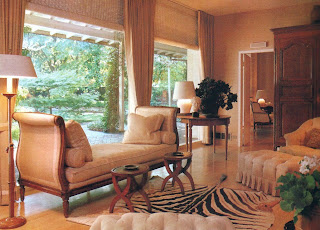 Photos by Russell MacMasters, from Architectural Digest, August 1984.
Posted by Blue at 10:44 PM