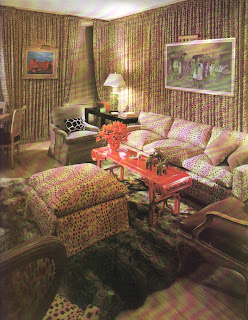 Not exactly original, I know, to say that a decorator's early work can be surprisingly different from the later, but, bear with me. The first photo is a case in point: the Brunschwig & Fils Les Touche caught my eye but it was the name of the designer that was so unexpected - Angelo Donghia.
Between the first photo from 1968 and the subsequent photos from 1986 (from an affectionate and valedictory article about Donghia's own place) lies a lifetime's evolvement: from the conventional to the experimental. In fact, such a development and tale of success that there's is no possibility that Angelo Donghia's name is forgotten. One of his associates, Ann Sonnet, said of him "Angelo's approach to life and work was utterly fearless. He was endlessly experimenting in his homes - he used them as a kind of design laboratory. His attitude was always 'If you don't know, try it!' "
His name is enshrined in the firm he founded in 1976 but what could be becoming less known to the younger generation of designers is the work he did, because, over twenty years later, it looks of its time, and the time for the return of the 1980s in design is perhaps not yet. 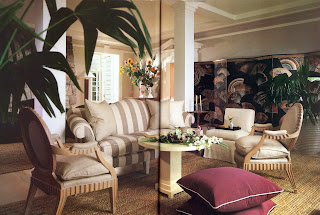 Impolite as it must appear to begin negatively about a man's work, I should state that I had never really appreciated Mr Donghia's work until I saw these photos of his own Connecticut house published the year after he died. All these years later there's still something a little "off" for my taste for, as with much from the 1980s, Donghia's furniture has that lowering of profile and upscaling of form, almost a constipated bloat, that was common to many of the more avant-garde rooms in those years. Perhaps it was part of the zeitgeist but certainly it was modish. Michael Taylor, for example .... but that is another post. 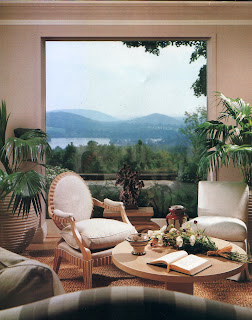 Angelo Donghia died of pneumonia in 1985. 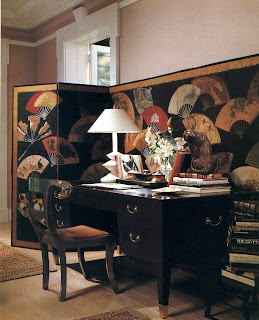 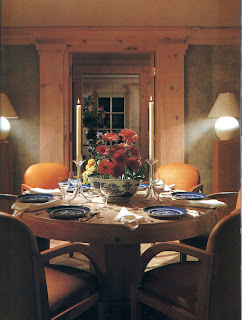 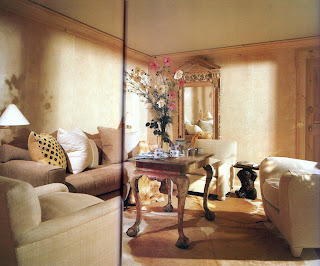 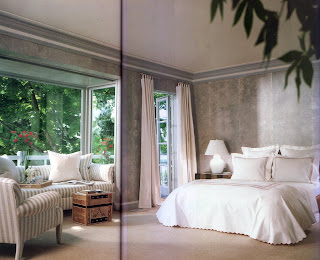 The title Leave them smiling was a quote from Mr Donghia: "Do what's appropriate. Leave them smiling." Source - Architectural Digest April 1986, text by Jesse Kornbluth and photos by Jaime Ardiles-Arce.
Posted by Blue at 6:00 AM