A purchase a day keeps the blues away

So said Michael Greer, about whom with a certain inevitability, I write today. Yesterday I mentioned a book by Greer I had bought a while back - the book being Inside Design by Michael Greer, published in 1962. The book, as I also said yesterday, contains clippings, so dry and fragile with the tape used to stick them in the book gone brown with age, from newspapers and magazines, some French, even one about his own New York apartment with the date 1957 written under the title. This article, two magazine pages back to back is inserted in the book as if it were a page that belonged, and clearly for the previous owner that page belonged.
Despite wanting to write about Greer, a native of Monroe, Georgia, who died in the 1970s and who is relatively unknown today, the person I'm most fascinated with is that previous owner. Who was it that used what must have been an expensive book as a scrap album about Michael Greer? Many of us have files, boxes, and digital albums in which we squirrel away images we like, rooms we covet, ideas for curtains, etc., but this book goes beyond that. It has the feel of an icon before which a candle was lit; a refuge in a life that needed glamour; a nurturing source of daydreams in which the quotidian round, so featureless, was raked with the light of what could have been.
If I'm not careful I could work myself up to a tear-jerker of a tale but, really, who knows? It's just a old book, after all. 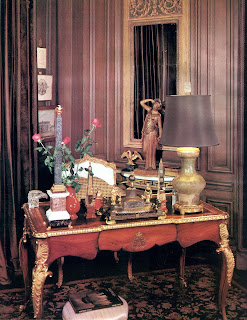 So, Michael Greer, one of the grandest of decorators, and if these rooms, his own, are any indication he was pretty grande, doesn't quite fit in my declared range of interest. He was a life-long bachelor (those codes!), died when he was 60, and thus off the stage when the men I've been writing about began to be known. But, still, he was a gay man and he died in a horrible, if not the same way, as my other subjects.
Let me quote a 1976 People magazine article, the likes of which I would hope thirty four years later could not be written:
At the height of his career, Michael Greer had everything. He was rich, handsome and celebrated. A decorator of considerable fame, he volunteered to beautify the diplomatic reception room of the White House. Actresses Joan Fontaine, Mary Martin, Geraldine Page and Ethel Merman graced his list of clients. He supped with the Queen of Denmark and the Duke and Duchess of Windsor. He drank from Baccarat crystal and travelled in a chauffeur-driven Rolls-Royce. With his French cook-butler, he entertained the Vanderbilts, Revsons, Bette Davis and Gloria Swanson. 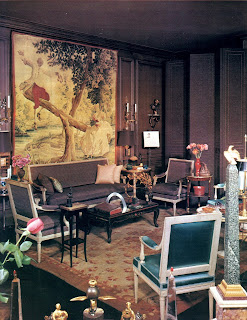 Mr Greer was found strangled, clad in a short kimono, ankles tied with a red cloth (seemingly his favorite color) laying on a highly valued possession, a steel-framed bed. His bedroom dressed in red faille hangings was soundproof - he said he wrote a lot in there. 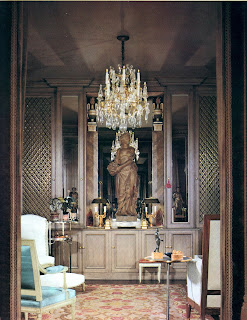 I come thus to the point - how are we to be remembered?
How cruel is it, in Michael Greer's case and even that of Mr Crispo of whom I wrote a couple of weeks ago, that they are remembered for the ill they did rather than the good they have done. A so-called old friend, when there must have been so much else that could have been a better epitaph, reduced Michael Greer, the grandest of decorators, to: Once Michael was stunning - tall, slender and witty. He died blotched, fat and bloated. His clothes didn't even fit him. Some friend!
The real friend, and the one we should all hope for, is the one who kindly puts away, as if between the pages of a book, all that is best of us and then when the circle is complete, those good memories pass on, too. 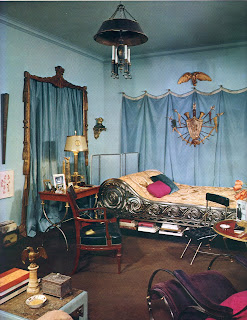 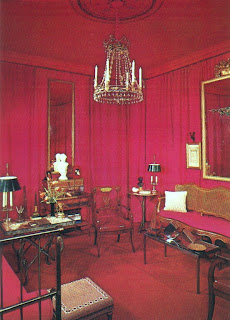 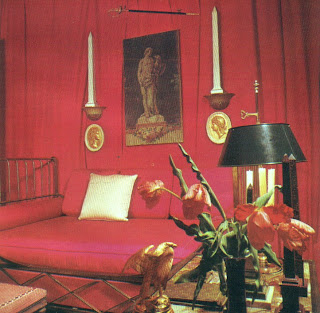