Our Own Snug Fireside

It is fitting, I think, to begin a series about American interior decorating on Thanksgiving, the most characteristic American holiday. Fitting, also, to begin in the New England of the Colonies and the Early Republic by mentioning the fact that I have coopted the tile for this post from a most excellent book – on my shelves since I read it as a graduate student and even more treasured after rereading it since meeting the author when Rory and I toured with the Decorative Arts Trust in Maine earlier this year. 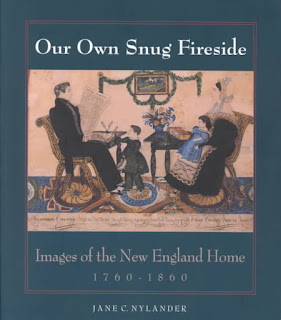 Our Own Snug Fireside: Images of the New England Home 1760 - 1860 by Jane C Nylander is one the best books ever about early American life. There's a lot to learn about what went into the colonial houses of this period – in fact how little actually furnished a room.  The reasons choices were made certainly prefigure the choices we still make and attitudes to conspicuous consumption were more pronounced then perhaps than today.  Ms Nylander is far better than I at explaining the early American attitudes and achievements in furnishing and decoration and I shall leave her to it. 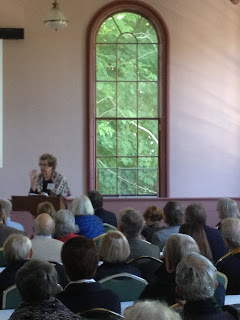 There is a sofa in the High Museum, that, if anyone mistaking morality for aesthetics and believing in Adolf Loos's stricture "No ornament can any longer be made today by anyone who lives on our cultural level ... Freedom from ornament is a sign of spiritual strength" could bring a person to a developmental rubicon. The High, a museum in aesthetic crisis when, thanks to indifferent architectural grafting by Renzo Piano, it turned its back on the decorative and ceremonial entrance to Richard Meier's museum, an act, it seems to me, symbolic of turning its back on the city … but I digress … and back to the sofa which actually is one of my all-time favorites. 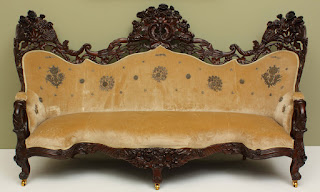 By John Henry Belter, this sofa, in what we know as the the Rococo Revival Style (at the time Modern French) is made of "laminated and carved rosewood, white pine, and ash with original appliqué designs on modern silk upholstery." The most astonishing aspect of this sofa is that the back,  made of plywood and curved, is completely smooth. The front is three-dimensional, carved exquisitely and pierced. It is a terrific piece of work – the crests resembling nothing less than the peineta worn under a mantilla in Spain – and now covered in beige silk velvet.

The creator of the Rococo Revival sofa was born in Germany, and like any number of well-known American designers/makers/artists/writers/creators contributed to what we think of as American Interior Decoration and Architecture. Duncan Phyfe, Charles-Honoré Lannuier, John Henry Belter, Calvert Vaux, and up to modern times with Mies van der Rohe, Richard Neutra and Eero Saarinen et al – immigrants all – the point is not to belittle home-grown talent and, believe me, there is more than Frank Lloyd Wright, but, rather to introduce the universality of interior design a hundred or so years ago even if universal meant two sides of the Atlantic rather than a broad world view. 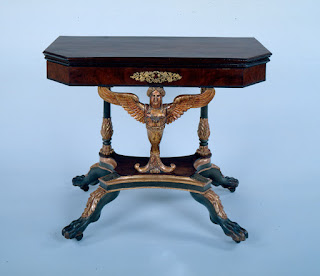 The American Empire Style is a version of the Napoleonic Empire Style but made by French immigrants like Charles-Honoré Lannuier, Scotch immigrants like Duncan Phyfe, and local craftsman and furniture makers in America – the point being these people worked in that style in American cities. The Gothic Revival, Greek Revival, Renaissance Revival, Modern French, Second Empire, Queen Anne Revival, Arts and Crafts, Beaux Arts, etc. all began in Europe and Britain and it wasn't until the beginning of the 20th-century that the tide of stylistic immigration turned and Europe began to look to America to see what Mr Lloyd Wright especially was up to. In that turning of the tide Wright's ideas met the English Arts and Crafts in Germany and the ideas behind Modernism were born. When that tide turned … and so on. 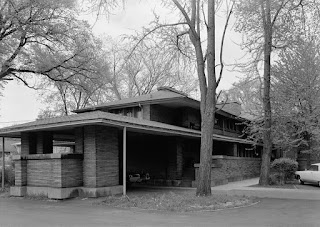 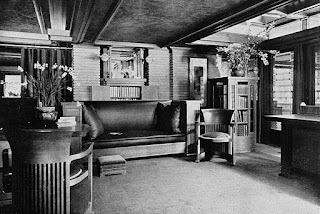 It's about this time, loosely speaking, that Elsie Mendl appeared to leave her Boston marriage and, being no better than she should have been, Introduced Wicker and Treillage into the Colony Club after which she took credit for everything there ever was, wore pearls with Red Cross outfits and eventually died at Versailles (which is more than Marie Antoinette was allowed to do). Everyone who should have known better took Mendl at her word and consigned Candace Wheeler, a far better designer, to the pages of dull biography almost unread except by the likes of me. 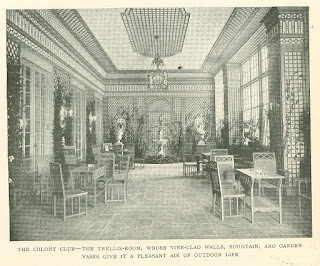 Immigration and importation have been themes throughout American interior design and architecture – even though General Washington may in a moment of madness have been offered a crown after the revolution, this country has never more had a king. Yet the forms of chairs, sofas and settees that have never been bettered for grace and beauty, and still sit at the apogee of style in the world's largest democracy, were developed under the French monarchs – imports of style that go back to before the founding of the republic. 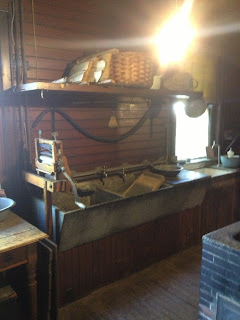 I took these photographs of a house in Maine, closed for more than twenty years, except for the rare summer visit. They show how much hard work went into keeping house. The reception rooms were not worth photographing - not that we could, corralled as we were behind a rope. Docents .... ! 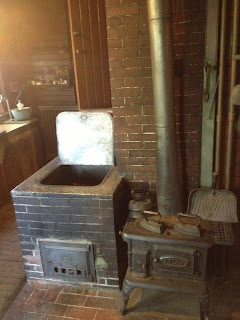 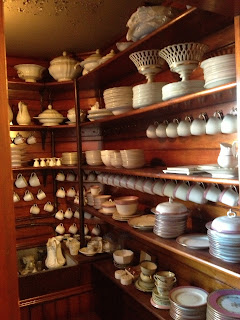 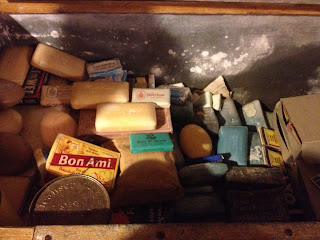 Soap was kept in the icebox to protect it from mice 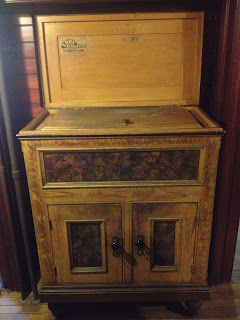 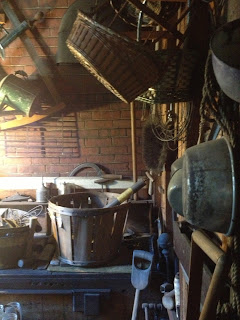 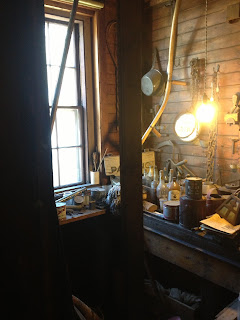 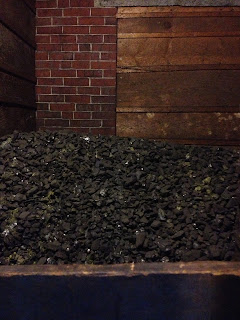 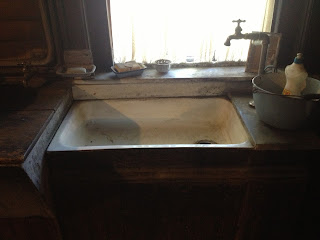 Just before Thanksgiving, this country (or many in it) turned its face against immigration, denying those who've fled their fireside a chance at another. America has done so before and stylistically, also, it has done so. The Tudor Revival, for example, in many ways thought of as a characteristic East Coast architectural style that developed after the Bicentennial when - to be simplistic – immigration of Jews and Irish was at an all-time high and the WASP establishment felt threatened and, as it were, drew up the stylistic portcullis, emphasized its Anglo origins and withdrew behind its Locust Valley vowels.

At the end of the 19th-century, when the wholesale importation of paneled rooms and, indeed, complete houses from Britain and Europe for American millionaires began, so did the supply of European art and furniture by the likes of Berenson and Duveen – a supply that continues today through decorators, auction houses and galleries – it all does rather beg the question of wherein lies the Americanness of American interior design. Bu that's for another day when Barny is less tired. 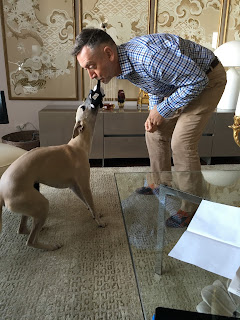 I sent him packing

The famous British magazine Private Eye used to carry a regular feature called Pseuds Corner in which they pilloried purple poetical prose or, piffle as the Brits call it. I have no idea whether the Corner or the magazine are extant but they would have had a field day with the inanities contained in this book. 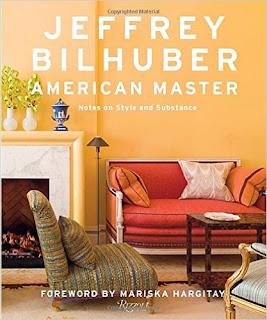 "It's easy to get white wrong – it takes talent to get it right"
This is possibly the most risible of the pieces of fustian I could fill this post with but I shall desist. Talent, my ass my eye – it takes lots of observation and a bit of hard work, more like!

"In so much as I am living and breathing, I am a barometer of change. That's my job. Keeping current and being in fashion means to be in your time."
This second quotation came pretty close to winning the prize but … I shall not dwell on it.

It's the hokum of these platitudes that is so absurd to me because, after all, it's only furniture, fabric and a drop of paint. It ain't art or even religion with all its attendant gobbledygook and superstition – it's decorating, not magic! I've said it before and undoubtedly I'll say it again: decorators should stick to decorating and leave philosophy to philosophers (or that bloke down the pub).

If one were to take the book and its contents at face value, one might suspect late-nineteenth-century mitten-Europa, with its middle-class Ringstrasse aesthetic and emphasis on blood-lines and family-trees, is popular in parts of the so-called upper-echelons or, rather, the monied sections, of American society. To some of us, the so-called non-worshipping classes, bullion-fringe tacked to mantlepieces – only one instance of a desperately Victorian-revival tone to the interiors, is a little too redolent of Franz-Josef and the mess he created and left behind.

It isn't often I return a gift but, frankly, Jeffrey Bilhuber, American Master though subtitled notes on style and substance contained so little of either, in my opinion, I promptly had this gasbag of a book sent whence it came.

So, I come to Sunday and a time when Barnaby Warboys allows me some time to write. The Celt is home and carries some of the burden task of being trained by a whippet pup, eight-months old, who continues to be be both delight and scourge. The wool and silk carpet for the living room came home after being cleaned, restored and guess what? Yup …you got it. As did the carpet in full force. 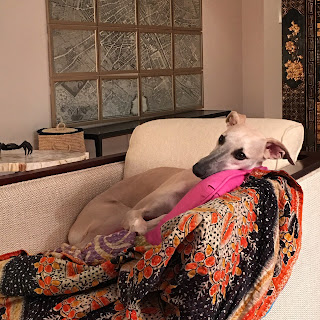 There Barny sat, Saturday night, as we had guests in for a nightcap, sorry for himself a little because he is ill, excited a little because we had guests and he likes company. After a while, first opening the bedroom door, he took himself off to bed then, curiosity getting the best of him, came back to say goodnight at the end of the evening. 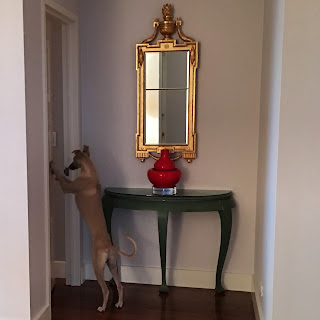 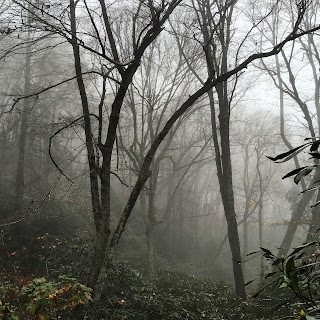 Our continuing search for a suitable country place – two bedroom, two bathrooms, with enough land for Barny to run free – has only brought the realization that what we envisage will have to be built. We began to lean towards a cabin combined with the contemporary. The one cabin we found had, after a long time for sale, been sold only two days before. Charming as it was – and it was – old as it was – and it was (1840) – really wouldn't have been the most felicitous for Barny or me. 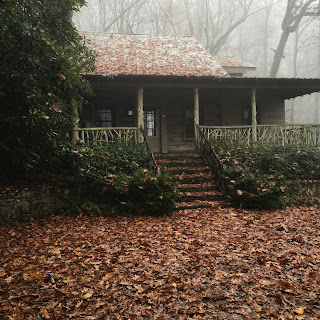 We both (The Celt and I, for Barny is silent on the matter) reached the conclusion that at any price-point (as the jargon goes) what is available, for our taste, is too traditional and evocative of a mountain setting. And why not? you may ask. Well, evocation of any place is not quite what we have in mind – The Celt is Scottish by birth and I am from Lancashire but neither of these facts should suggest a leaning towards tartans, antlers, cairngorm or macramed oatmeal or, in fact, anything else considered ethnic to either of our backgrounds. Heritage has no need of touristic flourishes the equivalent of monogrammed shirt cuffs. 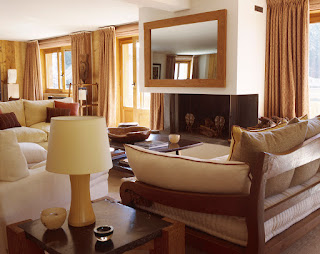 Perhaps these two views of a sitting room from a chalet in the French Alps designed by Mlinaric, Henry and Zervudachi visually explains my meaning. There is a lack of obvious references to place or function: no crossed snow-shoes above the fireplace; no antler furniture; no pinecone lampbases; no rawhide lampshades; in fact, none of the decorative cliches one has come to expect of decoration of a certain ilk. It is that lack of reference to locality that is particularly refreshing in comparison to the interiors we saw as we viewed houses in the mountains and online. 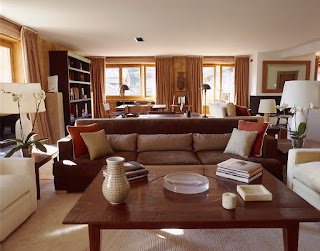 If our country sitting room is to reflect anything it is our family – the three of us – not the mountains, not Scotland, not Lancashire and certainly not some spurious idea of what English decoration is or even what American decoration is.

Which brings me to a subject I want to discuss in the coming post. American decorating. We read a lot about it, and how special it is. Is it just American exceptionalism and isolationism or is American decorating special?
Posted by Blue at 7:21 AM 30 comments: