This brooch from 1957 - a contemplative, if not downright melancholic leopard of gold, platinum, rubies, diamonds, emeralds and pearl - is a beautiful thing and has the simplest of connections with this post - Fulco di Verdura was the cousin of Giuseppe Tomas di Lampedusa, author of Il Gattopardo or, as it is called in English, The Leopard. The eponymous movie, from 1963 and starring Burt Lancaster, Claudia Cardinale and Alain Delon, was made by Luchino Visconti, a friend of Verdura's since the 1920s in Paris. 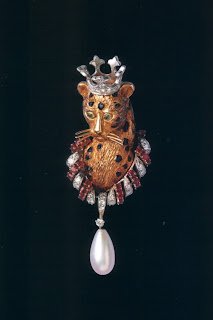 I have not read the English translation of The Leopard and being still at the come si dice stage in Italian 101 it'll be a while before I get to read it in Italian - if ever.

When we were in Italy at Christmas, it quickly became evident that to really understand what was going on around us, some fluency in the language was necessary. I'm not talking about the allegation that tourists in Venice pay more in restaurants than do residents, or that one takes on trust the English translations in churches and museums - more that, without a real knowledge of language, one only skims the surface of a culture - never actually experiencing it, beyond commerce, at all. Yet skimming the surface may only be what is required if the destination is yet the latest of a long list of trophy places to be brayed about across dinner tables in the fashionable restaurants. 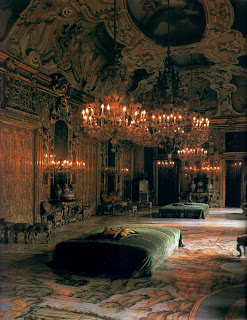 While on the subject of fashionable restaurants - last night we ate with friends and new acquaintance at Atlanta's latest offering, where to my amusement the waiter as part of his spiel about the chef's sourcing of ingredients locally, the rampant popularity of certain dishes... at this point I switched off and read the menu where there was nothing overly attractive except for fois gras with strawberry conserve. I've mentioned before, I think, that I find fois gras irresistible, but yesterday I discovered I don't really like it with sliced strawberries and dry rusk-like toasted brioche. It truly has become a culinary cliche, this fois gras with fruit, and when the combination is a stretch, or not even well-done, it falls flat on its gras little face.

What brought me back to my manners, the company and the waiter was his reference to an item on the menu as "my personal favorite..." clearly, he hoped, the most persuasive of all accolades. Now, I realize I live in a democracy and if I am to retain some semblance of civilization, the delusion that we are all equal has to be maintained. But, call me a snob if you must, I really don't care what a total stranger's personal preferences are, at table or anywhere else, for that matter. What I do care about is that someone, whether I like them or not, stranger or not, isn't humiliated - so, in the case of the waiter, though a retort was on the tip of my tongue, I kept quiet and sipped the sweetest, and possibly the worst, Manhattan I've ever had. Of course, the waiter was only doing what he hoped was the best interpretation of instructions from the manager and I as a customer was doing the best I could to play the game. But, I suppose, it's all part of the disneyfication of eating out and what a pity it is.

Last week I quoted a remark, snobbish, delicious and apt, that Fulco di Verdura made about David Hicks; and maybe Hicks was humiliated by what was meant to be a skewering of his pretensions, yet Hicks was undoubtedly a snob. You might say, if you were being polite, he had standards. Standards, and by that I mean accent, culture, and manners, are not normally innate - and here I am really stating the obvious - they are acquired. Upbringing is but a starting point, for beyond that we make the acquaintance of those from whom we continue to learn - those useful connections and introductions into circles previously beyond our ken or reach. In Hicks's case, and in relation to my posts of the last few months, it was Roderick Cameron, Wright Ludington, et al, from whom he absorbed, but did not necessarily copy, perhaps even had confirmed, other standards and taste. A chameleon-like aspect of character must never be ruled out when it comes to social climbing but it behooves one to remember the old saw about people in glass houses.

As I remark above, David Hicks, in my opinion one of the most significant decorators of the 20th century, was undoubtedly a snob, but in that he was no different from many a modern decorator or, as they frequently prefer to be called, designer - another step in the dance of status and branding. Arguably, if being a snob is part of your brand and you profit from it who's to say that it is wrong? Which of us is free of pretension - or snobbery for that matter?

Photograph of the leopard brooch by David Behl/© Verdura from Verdura: The Life and Work of a Master Jeweler, Harry N Abrams, New York 2002.

Photograph of the Gallery of Mirrors of the Palazzo Gangi at Palermo, the setting for the ballroom scene in Visconti's movie, is by Marc Walter. From the book Private Splendor: Great Families at Home, Alexis Gregory and Marc Walter, The Vendome Press, 2006.
Posted by Blue at 8:44 PM 27 comments:

Because it's been over thirty years .... 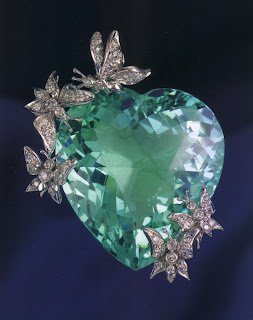 Platinum and diamond butterflies on a 61-carat aquamarine brooch by Fulco di Verdura, 1969.
Photograph by David Behl/© Verdura, from Verdura: The Life and Work of a Master Jeweler, Patricia Corbett, Harry N Abrams, 2002.
Posted by Blue at 12:13 AM 18 comments:

A connection and a laugh

The loan of a book, timely as it turned out, from a friend brings me, not quite full circle, but certainly back to the South of France, Roderick Cameron, La Fiorentina and that raft of men who at various times, whether by choice or duress, inhabited that ancient part of the Mediterranean coast and its hinterland.

Fulco di Verdura, though he flits through style icon hagiography, and Billy Baldwin's autobiography, has never really impinged too much on my consciousness. Of course, I knew he designed jewelry but not being fascinated by that particular form of quincaillerie, I wasn't all that curious about him. That is no longer so, for besides my liking for his "Night and Day" cufflinks, Verdura is a link in circles within circles - he knew Roderick Cameron, in whose house - almost a clearing house of talented gay men it seems to me - he met Tom Parr who had partnered with David Hicks who knew Wright Ludington and Hermes, Messenger of the Gods, employed Mark Hampton, and decorated Roderick Cameron's Le Clos Fiorentina for Sao Schlumberger, a house that eventually came to be owned by Hubert de Givenchy, the great friend of Walter Lees, who appears in one of Nancy Mitford's books, through whom I was introduced to Lord Mullion, and who was a confidant of the Windsors who were, in their turn, chums of the Mosleys, and knew Billy Baldwin's great friend, Van Day Truex at whose house in Menerbes Billy MacCarty was photographed in the years before he met Douglas Cooper at Henry McIlhenny's house in Philadelphia - a house in which hung a portrait of the Comtesse de Tournon through whom I came to learn of Alexander Baillie and Jørgen von Capellen Knudtzon. James Lees-Milne very likely wrote about many of them - except perhaps for Arthur Smith, Andrew Crispo, Joe Cable, Ruben de Saavedra, William Gaylord, and Kalef Alaton. 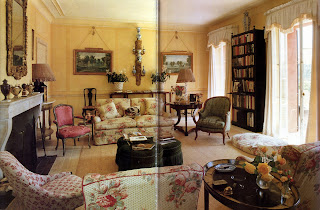 "He spent most of his time in London, however, in the city in which Tom Parr, whom he met in 1954 at Lady Kenmare's Villa Fiorentina on the Riviera, lived and worked. Tom had just set up an interior design decorating business with David Hicks, which he soon left for Colefax and Fowler, where he was president until his retirement in 1995. Their relationship was to last until Verdura's death, when Tom took his ashes back to Sicily. It was also in London that, as he was leaving a dinner given by Daisy Fellowes in Belgrave Square, he suffered a serious road accident that was gradually to erode his health. In the 1950s, Verdura started to paint, thereby returning to a youthful passion. Caricatures of his friends were his forte, along with humorous miniatures. It was this light wit, ever present in his conversation and his creations, that encapsulated the charm of the man who himself embodied all that the Old World could bring to the New: a name sonorous with history, immense knowledge, education, and natural chic." 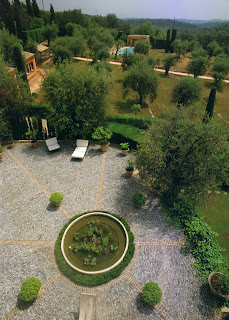 I found a lovely quote in Patricia Corbett's excellent book about Verdura's life and work - the ideal thing to end a post about connections, and it made me laugh.

"Hearing that the daughter of David Hicks and Pamela Mountbatten had been christened India, he suggested helpfully that the next child might be called 'Suburbia, after the father's side.'" 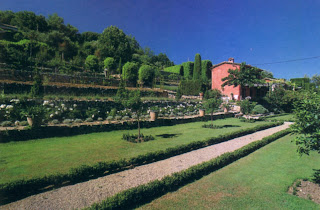 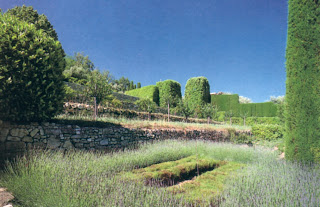 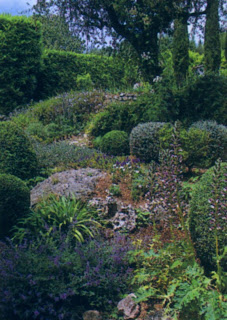 Photographs of Tom Parr's house by James Mortimer to accompany text by Min Hogg for The World of Interiors, February 1988.
Quotation from Cafe Society: Socialites, Patrons, and Artists 1920 to 1960, Thierry Coudert, Flammarion, Paris 2010.

Quotation about David Hicks from Verdura: The Life and Work of a Master Jeweler, Patricia Corbett, Harry N Abrams, 2002.
Posted by Blue at 4:56 PM 22 comments: