A few years ago, on vacation in Utah, I bought a book about Michael Greer in a second-hand bookstore: a book in which a fan had pasted newspaper and magazine clippings of his work, about his death and the dispersal of his estate. Underlined rather touchingly in a clipping about the sale was the line "... it was Michael Greer's last big event, but he was not there."
Clearly, the previous owner of the book had some sense of personal loss when Greer was murdered in 1976 and on rereading the book the other night I began to wonder how many of Michael Greer's interiors still exist. Naturally, the same question occurred about the work of the decorators I've written about over the last few weeks, Kalef Alaton's interiors in particular. I also wondered if interiors, like gardens, are as transitory as their creators? 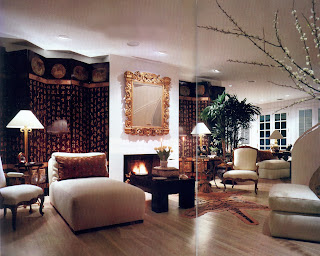 As ever with Kalef Alaton, the list of furnishings is impressive: Charles II-style oyster walnut and black lacquer chest on stand; a Qing celadon bowl; Régence-style chairs and chandelier; Paul Storr silver; Louis XV textiles; an Indo-Portuguese mother-of-pearl cabinet; Chinese lacquer screens; a Cy Twombly painting; a drawing by Balthus; an Ellsworth Kelly and Roy Lichtenstein's Modular Painting with Four Panels No. 6 and a stair rail as temptingly slidey to a grown man as it would be to a six year old boy. All juxtaposed with white linen covered sofas and chairs, against simple, clean-lined white-painted architecture and bleached wooden floors. 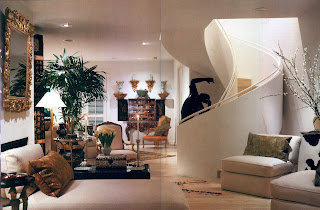 The dining room, a beautiful room with lacquer panels, gilded chairs, black granite, silver, crystal, exotic flowers and softly dramatic lighting, is a close as a 20th century decorator came to the spirit of a Baroque interior without creating a feeble copy of an historic room. Who would not want to be in this room - men in correct evening attire, women in scroopy silk, diamonds aglitter?
Who would not want to experience what, for me, is one of Kalef Alaton's most delicious of combinations - the needlepointed chairs flanking a table skirted in what looks like the softest of glove leather? Who could not want to sit there? 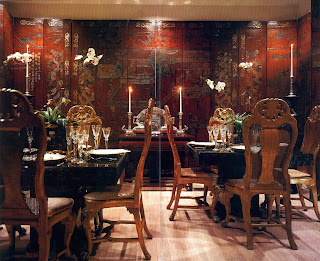 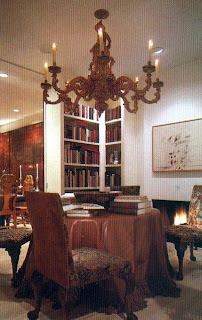 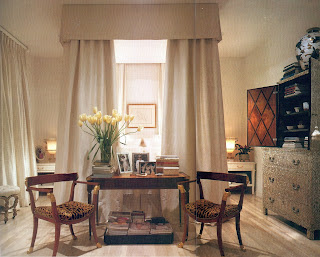 Name of photographer forthcoming but photos are from Architectural Digest, February 1987.
Posted by Blue at 3:47 PM