but to the owner of this house designed by William Gaylord and located in a canyon at the foot of the Sierra Madre Oriental mountains, clearly it did. 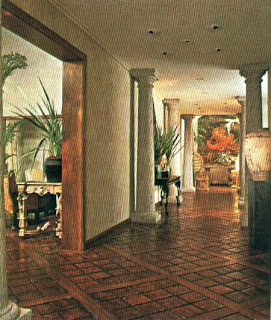 When I last posted about Mr Gaylord I said it was probably the final time I would have anything to say about him. Well, I was wrong, because I found another article. Mr Gaylord, if you remember, was the first of the decorators who died young, that I wrote about. At that time I didn't know that one post would lead me to what has become a quest for information about those who by dying young, often of AIDS, fell out of time and memory. William Gaylord was one of the first. 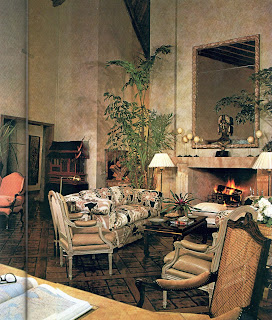 This post (I hesitate to say the last about Mr Gaylord) is about a house, that thirty workmen had laboured two years on building, of sixteen thousand square feet, with walls three-feet thick, ceilings twenty-seven feet high, a floor of tile made on the grounds, with columns carved from the local limestone, surrounded by a Japanese garden, set in a walled compound with six other houses constructed on large tracts of land for the children of what the writer of the article describes as a Patriarch. 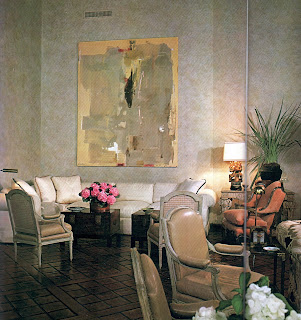 Beyond the house's immensity and the obvious pride on the part of the Patriarch, there is disappointingly little to catch the eye, but not I think the fault of Mr Gaylord. The Helen Frankenthaler painting, the source of both the living room's color palette and the four-layer mottled finish to the walls, is big - eight and a half feet by seven feet - big enough to give the impression it was ordered up by the yard, yet not large enough to defy the height of the walls. The furniture, too, according to the writer of the article, had to be over-scaled in order not to be dwarfed by the dimensions of the room. 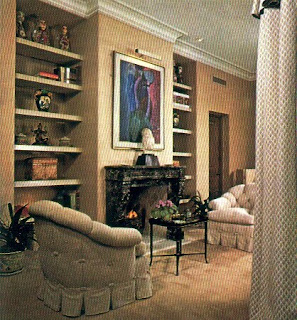 Mr Gaylord on working and shopping with the owner's wife and both of his clients:
"It was a pleasure to work with her. She is extremely knowledgeable about design and has a flair for coordinating all the various elements that make up a successful interior. We traveled to many cities to find the best each had to offer, and, too, the owners had collected many exotic pieces on their travels around the world. I was really more of an editor than a designer. It was demanding, however, though very enjoyable. Both the owners are thorough in everything they attempt, whether it is playing chess or polo. Many people purchase objects for their beauty, but they go further, researching origins and history." 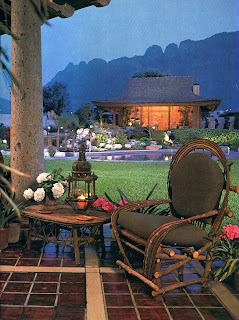 Someday a post about the language of interior design might be interesting.
Photos by Russell MacMasters from Architectural Digest, June 1980. Original article written by Cameron Curtis McKinley.
Posted by Blue at 12:40 PM