The mistake most often made .... 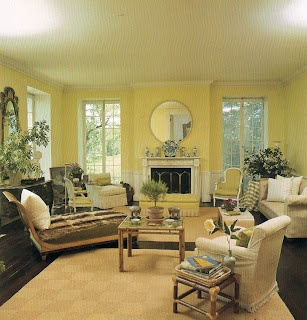 "... by people doing their own homes is choosing every perfect detail. The greatest chair, the greatest rug, the greatest fabric. But they don't work together. Overblown. Just too many things. Nothing becomes important." So said Harrison Cultra, presumably in answer to a question asked by the author of Decorating for Celebrities, in 1980.
There is nothing overblown, nor are there too many things in the rooms shown here; dapper, affable and livable spaces. Mr Cultra described his living room as being painted a color he "matched to the moment of Spring when everything turns green. That very special perfect green; in summer it appears very yellow." He also mentioned that the furniture, because of the spare and modern feel to the room, appears to float. Furniture did that a lot of that those days. 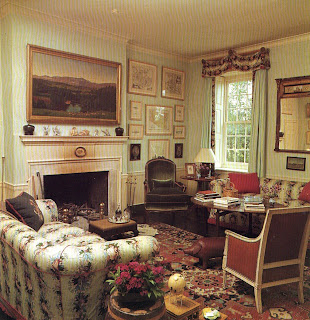 The photo of him in the book shows a handsome man, short-haired and full-bearded, in a waisted suit with wide lapels over the broadest of ties - the likes of which has not graced the neck of man since. A comely man indeed, looking quite the swell in best bib and tucker standing happily in front of his own fireplace in the living room of his 1773 Hudson River house. Three years later he was dead of AIDS at the age of 42.
Photos by Billy Cunningham, from Decorating for Celebrities, Paige Rense, Doubleday & Company, 1980.
Posted by Blue at 1:53 PM