Times Past and Times Present

Does anyone remember a world without hostess gifts? Am I the only one who objects to taking along a bottle of wine every time I step out of the door for dinner at a friend's house? Is any one of us nowadays unused to a nibble with a cocktail? I remember when the, to me abominable, habit of taking along a bottle of wine began, and I was as sure then as I am now that it was a result of salesmanship aimed at the genteel classes – people anxiously persuaded that the path to Salvation meanders through the countries of Graciousness, Fine Chinah and Regifting. Apropos cocktail nibbles I came across the following whilst reading Michael Innes's A Connoisseur's Case. Times change, indeed.

“But, Uncle Julius, wasn’t it only rather earlier that people were transported for poaching?’
‘Was it? The more’s the pity.’ Colonel Raven put down the decanter, picked up a plate of small cocktail biscuits which had been set on the tray beside it, carried these over to the hearth, and there emptied them into the low fire burning in it. ‘My people are all dunderheads,’ he said. ‘Impossible to get them out of these damned vulgar habits. Got hold of them in London hotels, I suppose. What did you say, my dear?” [The italics are mine.] 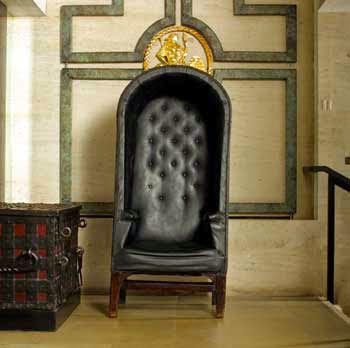 Porter's chair, allegedly from the Bank of England Museum

From another of Innes's tales, again with the same hero, John Appleby, a quotation about changing times but only obliquely so – about a perfectly functional piece of furniture that, for some, has travelled up the social ladder and changed sex, whilst, for others, it should have remained where and what it was.

"And Appleby grabbed Judith by the wrist and hauled her within one of those curious contrivances, midway between a sentry-box and a family sarcophagus, which the eighteenth-century considerately provided for the porters in its draughty halls." [Again, my italics.]

I first saw the modern, more fashionable version that is used, for example, in the Kelly Wearstler-designed BG Restaurant at Bergdorf Goodman, forty years ago in Harrods and still I loathe its ill-proportioned conceit. The Horrids version, if I remember rightly, came from Italy and was to be found in its Decorative Furniture department. I've seen it in "antique" leather, in linen, in velvet, buttoned and not, and in wicker. But what I haven't seen, though it must have existed, is one with a liftable seat above a chamber pot – the cause of much tittering and blushing in the shires cul-de-sacs of this land if a chamber pot were even to be recognized for what it is.

I make no comment on Ms Wearstler's version except to say I have never sat in one on any of the occasions I have eaten at BG. The following quotation from One King's Lane may give some hint as to why. 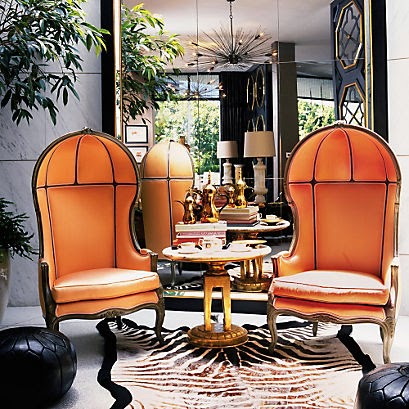 "The Fabulous Porter Chair"
Photograph from One King's Lane

"These dramatic high-backed chairs are most recognized as the seats of power for ladies who lunch at the Wearstler-designed restaurant BG in New York’s Bergdorf Goodman department store. Irresistibly feminine, the canopied chairs are a Marie Antoinette dream come true."


Speaking of ladies who lunch, the last time we were in BG, we sat next to two young women speaking English and French interchangeably, in that easy way that only people with absolute fluency in both languages can – one, it transpired, the Executive Vice President of Laurent-Perrier U.S., the other the Direction de la Communication et des Relations Publiques in France. We had extended cross-table chats and much Laurent-Perrier champagne; so much so, we were only capable of an afternoon nap rather than our planned quick canter around the Jeff Koons retrospective at the Whitney (which, it occurs to me now, might well have benefited from the Laurent-P we'd imbibed). A few weeks later, from one of those ladies at lunch, arrived this lovely and very useful champagne bucket, together with a set of flutes. A delightful and very generous gift that has been the object of none too-subtle hints by would-be regiftees! 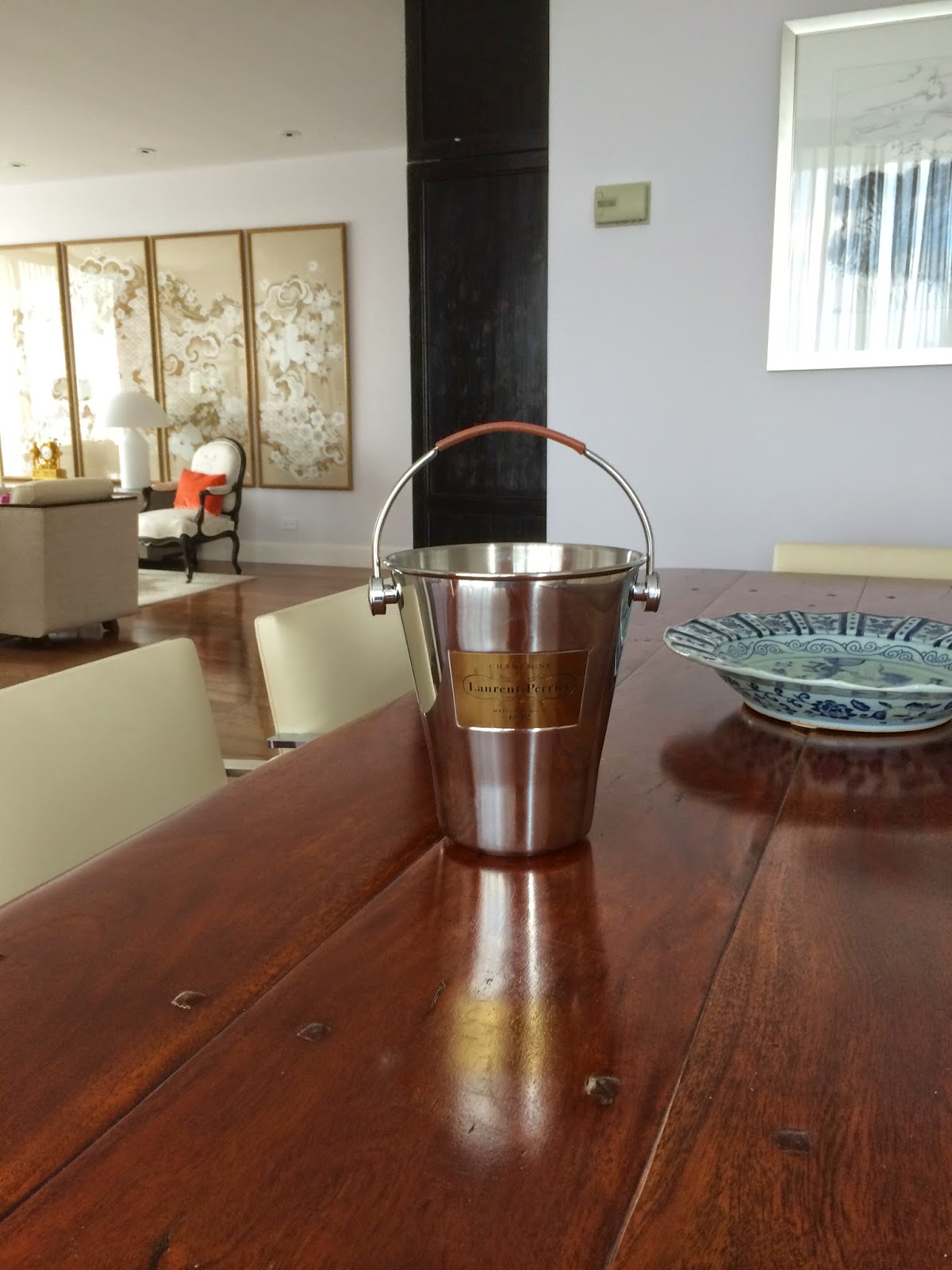 This morning we leave for New York – friends from my university days are visiting this country for the first time. and we are joining them for a few days of museums, opera, cocktails (with nibbles), lunches (at BG, Jean-Georges, etc) and the postponed visit to the Jeff Koons retrospective (described by my brother-in-law, as the high-fructose corn syrup of modern art). Thereafter we're driving to Philadelphia and thence to Washington DC and I hope to be blogging whilst I'm away.
Posted by Blue at 5:37 AM