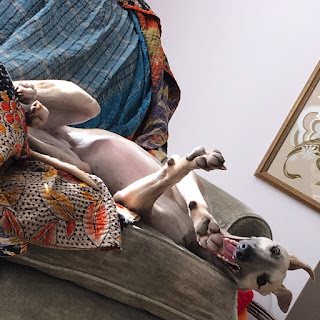 If you lived through the 1960s in the United States, you were either very worried in an existential way or, at best, oblivious to every crisis that loomed – and there were many. One area of calm persisted for, despite an occasional stab at modernization, crises simply did not figure in American Interior Decoration – the Colonial Dames Revival ruled. Oh, it might have got itself decked out in Empire and been prettily glamoured by Hollywood but, essentially, the same stuff as John D Rockefeller's Williamsburgian dreams were made of - and there's nothing wrong with that.

One aspect of American interior decoration that Hollywood featured was space – seemingly boundless space within rambling country and seaside cottages – and for a while, intramural acreage, the most luxuriously tangible condition of American democracy portrayed in movies and thereafter in magazines, made many a European head for the docks and, for that matter, many an American thankful for ambitions yet to be fulfilled. 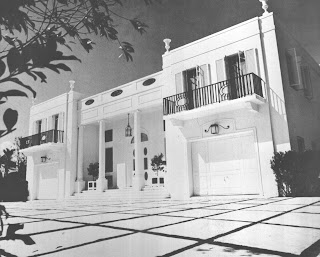 The idea of a house for the summer or the winter, to my mind, is distinctively American – much in the same way "resort wear" is an American invention – a way of living and entertaining in eternal sunshine. The British aristocracy had the "Season" when annually its members left its estates, went up to town for the winter and socialized, presented its daughters at Court and fired them off into society and a suitable marriage. 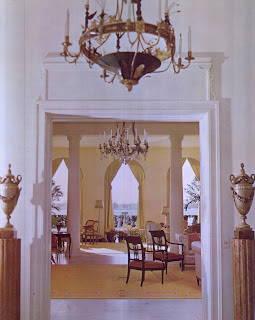 American aristocracy also had its Season for pretty much the same reasons but the resorts were designed around particular activities such as boating, skiing, etc., and entertaining but they were not designed as tourist or vacation-package destinations as we understand "resort" today. Rather, they began as exclusive developments for compatible and rich society members, able to have more than one household and, in the manner of medieval monarchs, move seasonally from one to the other. Nowadays, society being what it is, the luster might be gone off the resorts but the lure of summering or wintering remains. 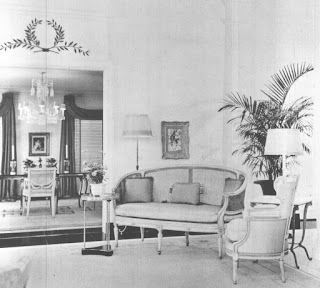 Michael Greer, once one of America's best-known decorators, is listed as the designer of this Palm beach house (by which I assume is meant that he was the architect) and the style of the white plaster structure is described as being "inspired by the Palladian villas of the Mediterranean" which must have invited incredulity even in 1966. Undeniably beautiful, even playful within the limits of symmetry, obviously Palladian the house is not. Mediterranean it might be given that is an American architectural style not known in and around the Mediterranean Sea. One detail easy to miss if the eye is too quick to pass along the front of the house is the solution to the two-car garage. 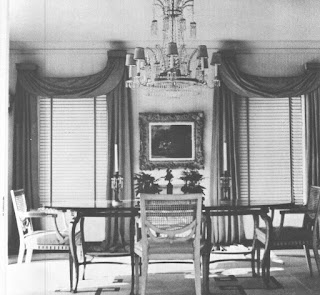 These are not the charismatic rooms of the Wrightsman residence in the same town, but as might be expected from a decorator Mr Greer's calibre this house has all the urban elegance that resort living and entertaining in Palm Beach required. Large, airy rooms, succeed each other from portico to water – entrance hall, drawing room, card room – separated by Tuscan columns rather than the Ionic of the portico. There's an emaciation about the moldings, a flatness to the walls and an inconsequence to the floors that subordinates any expectation of conviviality implied by the facade and the motor court.

In theory, backgrounds should not intrude and here the background, white and virtually shadowless, is as reticent as it can be for furniture that is known as "fine" – Louis XVI, Empire, Directoire – on carpets by Edward Fields, done up in pale greens, yellows, creams and pinks, and contributing to the mood of formality amongst the palms. 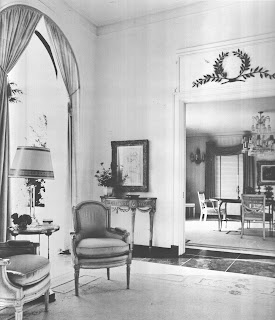 I nearly wrote how up to date it all looks, this interior from fifty years ago, but that wouldn't strictly be true – rather the contents of the house have never gone out of style. The sofas in the drawing room, admittedly, have a dated air but they are perfectly acceptable to today's retro-decorator sensibilities and, more to the point, are a mildly-modern element enlivening the traditional whole. A mid-century vibe, I suppose, one could say.  Sofas flanking a fireplace, across a coffee table, accompanied by symmetrically-placed matched chairs became such a cliche of decoration … in fact, as ubiquitous as the karate-chopping of pillows in later years. 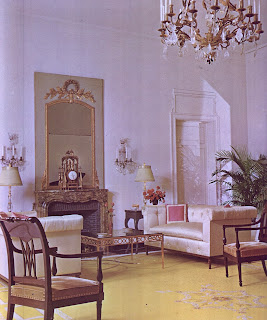 Michael Greer's Inside Design by Michael Greer, one of the first "decorator monographs" is still a book worth seeking and reading. My copy, bought ten years ago in Salt Lake City, is augmented with clippings glued-in by the previous owner fan, is much valued, especially for the additions which otherwise I might never have seen. Looking through it again I have the impression that Mr Greer, in his time, was the nearest American interior decoration came to equalling the decorators at Maison Jansen. Thus, you may wonder why Michael Greer is not so well-known nowadays. 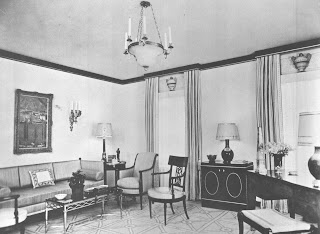 Well, forty years is a long time dead and, besides that, Michael Greer was murdered during sex with a stranger in his own home. Even in the more liberal 1970s People magazine, not known then or now as a forum of high-mindedness published an obituary of him that is shaming to read – more for the way "friends" rushed to salivate over his corpse than for the faux-grieving tone of the text. 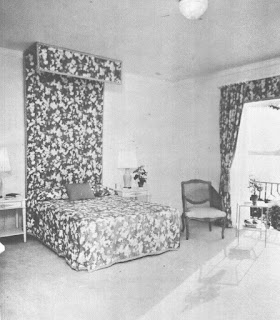 I wonder, once the prurient had their day, if there was a turning of the shoulder of self-protection, an immediate disassociation from the victim and all his works. Perhaps in the following lies the answer: Michael Greer was raised in Monroe, GA, and there, his ashes are buried, allegedly without a marker. 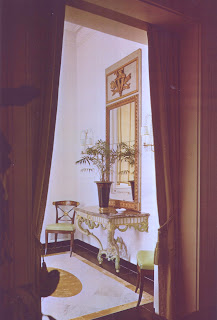 A while ago we watched a movie Do I Sound Gay and whilst I found it somewhat interesting I'm not wholly convinced such a thing as a gay accent exists though there certainly is a perception that it does. However, it led me to wonder how far gender-stereotype crosses over into decoration – American decoration, that is. We blithely use "masculine" and "feminine" in decorating so I ask if one could use "gay" in the same way. "Oh, very gay, dear" perhaps, is not quite what one wants to hear, but why should it not be?

So, is there such a thing as Gay American decoration? That's for another time, if my lawyer and Barnaby Warboys agree. 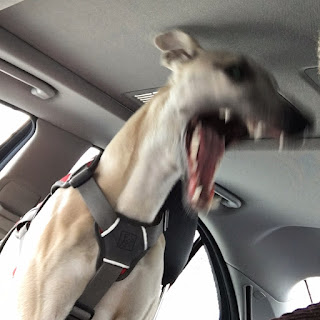 "What part of "feed me" don't you understand?"