"Really?" I thought, when I saw the malachite-painted chair in a photograph of a room at Kips Bay Decorator Show House. Forgive my skepticism, but there's a degree of absurdity in pretending that a slight, spoon-backed chair could be made of malachite and could have supported itself, let alone an object heavier than a handkerchief, and it is that very fatuity set me thinking, again, about show houses and why I still go to them.

From my perspective, show houses offer an annual opportunity to see the work of upcoming and well-established decorators under one roof. A good thing, undoubtedly, but at the same time a show house presents one with a visual avalanche that can be overwhelming and, consequently, it is the rare room that stands out even a few days later. Nonetheless, some rooms are memorable even after a long time, as are some objects or juxtapositions. For example, the quilt of living moss that covered a bed a few years ago remains in my memory - but whether as a thing of ridicule or romance, I cannot decide. I remember it, but not the rest of the room or, perhaps more importantly, the designer - and it seems to me therein lies the problem. If my encounter is with an object rather than the room then it means that either I'm remembering for the wrong reasons, or put another way, forgetting for the right reasons.

Recently, after a recent visit to a local decorator show house, what remains in my memory is a  kaleidoscope of neutrals and the impression of a sedimentary layering of accessories and props. That is not to say that there weren't moments of pleasure - beautifully made, handprinted linen paisley curtains that were the raison d'etre for a whole living room in which three tiny hand-carved wooden birds had landed on a marquetry commode; an iron tripod table partnered with a crustily gilded and damasked Louis XV chair in a cream and crystal dining room bounded above the dado with mercury-silvered mirror; a dusty-gray Spanish table doing duty as a desk in a man's study; a coolly brown understated guest suite; Hogarth prints matted in glass against tailored gray flannel walls; a purple-lacquered sideboard affectionately known as Barney; along with some very fine bathrooms. But beyond these moments - the equivalents of the malachite-painted chair - there was little that has stayed with me these two weeks later. Mind you, it could also be these old gray cells are just wearing out!

Please don't think I underestimate the effort and expense that goes into dreaming up and creating these ephemeral interiors. They are works of art and in many case truly labors of love. Indeed, from the designer's point of view I wonder what the return on the investment actually has been over the last few years. If, as I read here, what growth there was in the luxury market has slowed down, it makes me wonder how long these costly affairs can survive. 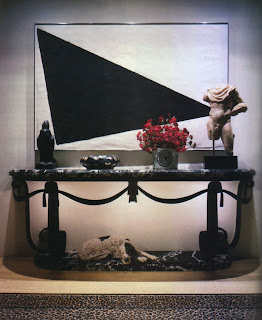 Which brings me to today's decorator - someone I've written about before and whose work as illustrated in these photographs is an example of the staying power I'm talking about. 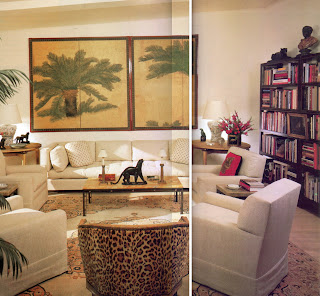 Arthur Smith's own rooms, created over thirty years ago, are I think a superb example of an interior that has not dated, a rare quality of interiors from that decade of plutocratic absurdities, the 1980s. I had intended to analyze precisely what it is about this interior I like - other than the Art Déco bronze console by Richard Desvallières for Süe et Mare, the Egyptian falcon, 1st-century Roman torso, Japanese box, 19th-century faïence dog, the Richard Serra Black Triangle drawing on paper, 18th-century Japanese screen, bronze panther, 18th-century Venetian figures, the statuette of Aphrodite standing before a miniature trellised pavilion, the carved, painted and gilded dining table, the amazing collage of watch parts, 1st-century Romano-Egyptian lion, 1st-century Roman head in the shower, Diego Giacometti stool, Amish quilt, Franz Kline drawings and Thomas Hinckley painting of a dog - but a commenter on my post Soignee summed up my thoughts about David Whitcomb, by extension this interior by Arthur E Smith, and indeed much of what I am always looking for in decorator show houses.

"I think what you like is the deliberateness with which things are arranged - considered, thoughtful choices - which convey a sense that the objects on display have meaning, or significance, to the owners. And well-made things are given breathing room, as if to say: "have a look ... enjoy me ... I'm worth it." We create a narrative when we arrange our rooms - and the story being told here is sophisticated, assured and inviting. This house makes me want to know it's occupants - what do they think; what do they read; where do they go in their spare time - that's an alluring notion ... and an accomplishment." 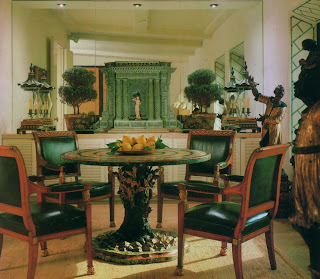 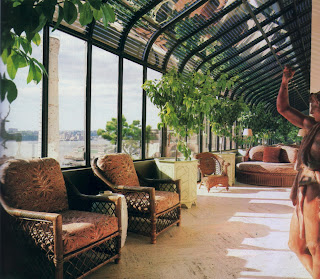 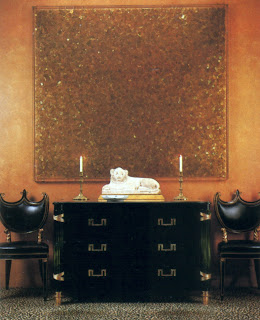 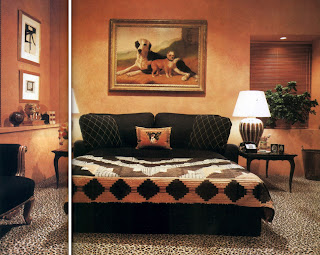 Photographs taken by Peter Vitale to accompany text by Patricia Warner - from whom also list of contents in Smith's loft - written for Architectural Digest, November 1987. 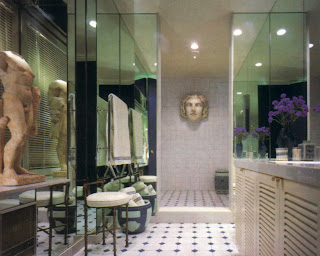