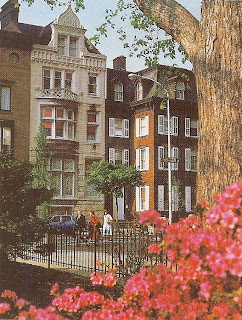 "In one of the links to your last entry, there was mention of Billy McCarty meeting Douglas Cooper at the house of Henry McIlhenny in Philadelphia. McIlhenny had astounding furniture and pictures. In House and Garden, April 1986, John Richardson (part of the circle) wrote a remembrance of him with great photographs of the Rittenhouse Square house in its last incarnation. I believe you would enjoy seeing it."

So wrote a kind reader and when I replied that I didn't have that issue, within hours he sent me scans of pages from his files, and here they are - together with photographs, vignettes really, published in House and Garden after McIlhenny's death. These photographs - the ones after Degas' bronze Dancer, Dressed - accompany a text, a tribute to a friend, indeed written by John Richardson. I had found the essay mentioned above but not where I'd first looked. 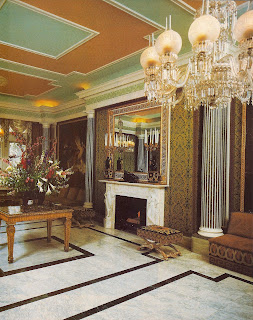 "Henry McIlhenny, the Philadelphian collector who died this year, was one of the last American Maecenas: witness his sumptuous house (actually three houses knocked into one) on Rittenhouse Square and the Balmoralized castle he used to own in Donegal. Henry was not only a great connoisseur, he was one of the last exponents of a tradition going back to the Augustan Age: the tradition of the scholarly plutocrat with a passion for the gamut of civilized living - for gardening, cooking, and conversation as well as art, music, and literature. There was also a dash of the nabob about him: a benign Beckford. 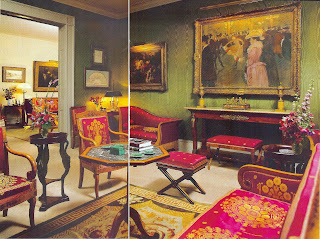 "Although his French paintings were incomparable - in my opinion the best private collection of its kind in the country - Henry never allowed them to upstage his way of life. On the contrary, unlike today's collectors, most of whom exploit their acquisitions for financial, social, or egotistical reasons, he was at pains to play down his possessions, except in the company of other art lovers whose pleasure enhanced his own." 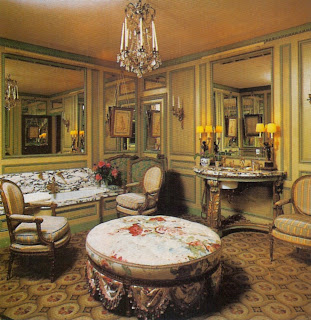 "To his vast circle of friends, Henry was also one of the warmest, funniest, liveliest, most generous men on either side of the Atlantic. For he lived by his dictum that 'wealth must be used for the enjoyment of others.' Henry's hospitality was such that one expected a flunky with McILHENNY ARMS embroidered on his cap to be waiting at Philadelphia's 30th Street Station or Belfast's airport. As he told Patrick O'Higgins, 'A good host is nothing more than a good innkeeper.' In fact, Henry was far, far more than an innkeeper, as the countless visitors to Rittenhouse Square or the thirty-thousand-acre fiefdom in Donegal (now a state park) can testify." 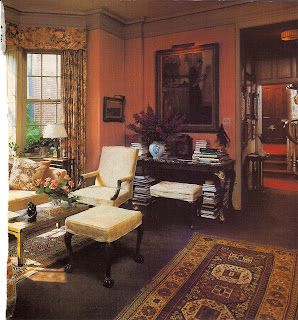 John Richardson wrote a extensive account of Henry McIlhenny's life - too long to be quoted in full here but he ends it with another heartfelt tribute to his friend.

"Last summer Henry planned to return to Venice, but death intervened: first his sister, Bernice; then, less than two weeks later, Henry himself. The flags of Philadelphia flew at half-mast and, on one public building in particular, could only be persuaded to return to normal with considerable difficulty. In due course, the Philadelphia Museum - heir to most of Henry's art - will put the collection on view and thus provide its creator with the best of monuments. Meanwhile, Henry lives on in the memories of those who knew him as more than a great host, more than a great collector: a friend who had the distinction, rare in the very rich, of a heart that eclipsed his fortune," 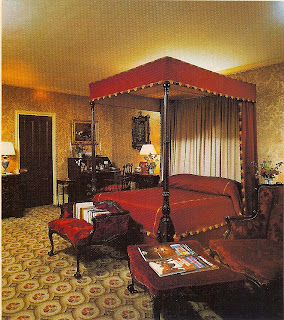 Such a fine valediction is not met with often. Would that we all could be so well thought of at our passing.

One of the obvious differences between the two sets of photographs, besides the aforementioned vignetting, is one of disposition: the first being workmanlike record of space, the second a memoir of abundant atmosphere - and both represent a shift in the way interiors are viewed, and, by extension, the way photographs are perceived. Art or mechanics: your choice.

Look back through interior design magazines from the 1960s and 1970s and it becomes clear that the tradition of simply recording interiors established in the early years of the twentieth-century by Country Life, etc., had currency into the 1970s. It was in the 1980s that a change began to take place - drama began to be a quality sought after and was remarked upon in the magazines of the day - and homes began to be stage sets for lives written about in society columns and design magazines. For a number of years now shelter magazines, increasingly, have not been about design but about salesmanship and celebrity. I've mentioned before, I think, that for me the nadir of design publishing or, perhaps more correctly, the triumph of celebrity over good design were the two recent Architectural Digest essays about Michael Jackson and Gerard Butler.

These latter photographs, vignettes as I have said, of the much celebrating and celebrated Mr McIlhenny's rooms are more than a mere record; they give the impression almost of a slinking caress of light and shade over the lustrous surfaces of the Charles X bois claire furniture, watered silk, silk damask, brocades, marble, Degas' bronze, ormulu, gilded wood, Ingres', David's, Delacroix's, Renoir's, and Matisse's paint, a Boulle commode, and a fir tree's lights glowing through puffs of baby's breath. 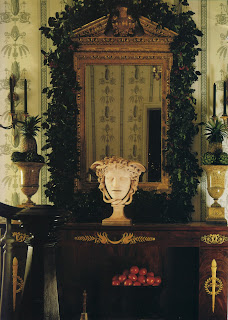 So, finally, I come to my theme of late: circles within circles or, more simply put, connections. There is more to be written, vignettes drawn, not perhaps about Mr McIlhenny, but certainly about others who connect. 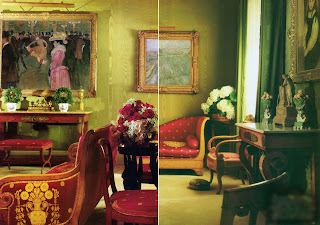 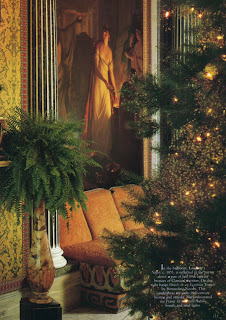 I have no record of the photographer for the first set of photographs. The photographs in the second set are by Oberto Gili and accompanied a text by John Richardson published in House and Garden, December 1986. 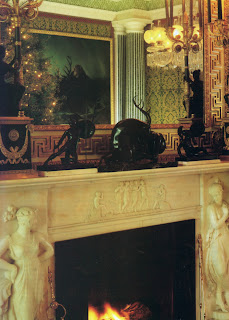 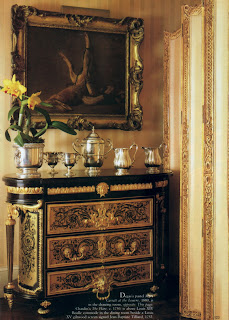