.. very much to my taste and the latest in an occasional series about libraries.
As I said on Friday, one thing leads to another, and this post leads me back to where I'd begun - with Billy Baldwin. In Billy Baldwin Decorates there are photos of Mr and Mrs William McCormick Blair, Jr's living room and dining room. Though the room shown below is not one of the illustrations in that book, photos of a refreshed but essentially unchanged Baldwin library were published nine years ago in House Beautiful - a room, nacreous, well-mannered, sunny in disposition and very much to my taste.
It's very hard to put one's finger on precisely what it is that makes this room so special for it is a true example of the whole being greater than the sum of its parts. The more one attempts to analyze it the further it seems to recede, as does a dream that fades more quickly the harder one tries to remember it.
This is what the Germans and by extension psychologists call gestalt: perceiving something as a whole rather than through its separate aspects. One way to think about this is to imagine eliminating one element from the room - the painting for example. Obviously it is the biggest thing in the room so eliminating it altogether would leave an enormous gap, but even substituting it with a different painting would transform the mood. An example on a smaller scale - imagine the fauteuils replaced by a pair of club chairs and immediately there would a very different room - it would become prosaic. If the whole is greater than the sum of the parts then changing one aspect drastically alters the whole.
This then is the ineffable quality of chic - an indefinable, harmonious balance between many things that, somehow, works. 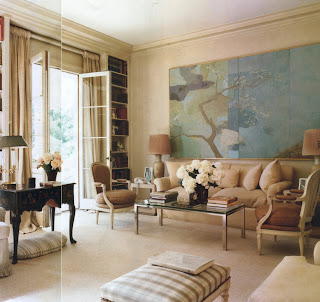 Photos by Eric Boman to accompany text written by Marie Brenner for House Beautiful, September 2001.
Posted by Blue at 7:27 PM